To explain 1917 to a modern audience, the best description I can think of is, “think of American Ninja Warrior with a soft British accent.” The genres have a lot in common in that both deal with heroes facing greater and more fantastical challenges of strength and endurance as time goes by, until one, and only one becomes victorious.

However, unlike the Ninja version, in 1917, the many individual heroic actions become completely pointless against the larger backstory story of the Great War that 1917 hints at. Near the end of the movie, despite the death of a friend during the striving-journey, the endured hardships and the extreme physical exertion; when our hero Lance Corporal William Schofield (George MacKay) finally reaches Colonel Mackenzie (Benedict Cumberbatch), he is literally told to “F**k off.” This is hardly a hero’s welcome. Colonel Mackenzie points out to Schofield that his actions of the moment might have saved the 1,600 men today, but tomorrow or next week, the men will be again called to “go over the top.” The camera underlines the point that most will die or be maimed or wounded in the very near future, as it takes us on an over-the-shoulder walk-through of the aid station behind the lines in the next scenes as simultaneously men continue to walk towards the front.

The writer and director (Sam Mendes), continues to underscore the pointlessness of WWI throughout the movie. The two characters Schofield and Lance Corporal Thomas Blake (Dean-Charles Chapman), clamber across no man’s land to find the empty German trench works; elaborate in scale and sophistication. “They built all this?” they ask. All this effort and ingenuity devoted to a non-productive pursuit. Immediately after the death of the Blake character, Schofield discovers that, rather than make the dangerous crossing through no-man’s land, they could have just hopped aboard one of the trucks in a convoy that took almost the same route at about the same time. This might have saved Blake’s life. This situation is not an unrealistic historical point in that WWI has countless examples where the lack of coordination and true planning burned through the flower of a generation. Schofield himself suffers at the hands of his map reading ineptitude when he crosses a destroyed bridge into the village of Écoust-Saint-Mein. He discovers later that all he had to do was follow the river (from where he started) to get to his destination. Entering the village was just a pointless and dangerous diversion that slowed him down and left more death in his wake. Again, a metaphor of the larger War.

The cinematography of 1917 is well crafted. The big skies and fields, the quagmire of the mud, the lighting of the frames of the ruined buildings in the village, the relentless tracking of the camera forward in one continuous shot; all contribute to the rich visual experience. The music composed by Thomas Newman, greatly helps to enhance the visuals. Music is used where it is adds to the pace with a pounding beat, and music is correctly withdrawn where the scenes require no underscore.

The set design was also stunning. However, there were three things that distracted. The first was when the main characters were crawling through no-man’s land. On-screen, it appeared that over half of the bodies encountered in this quagmire had miraculously died by landing face-first (face obscured) into shell holes with their feet together and sticking straight out of the mud exposing their boots. This gave the impression of “set decorating” and distracted from the realism. Secondly, the mud and the trench- work all seemed to be freshly dug as you might do when creating a set. The mud was too clean, too newly formed. In the sector of the line depicted in the movie, these trenches would have been well worn, with the wooden scaffolding smoothed over time by the passing of thousands of men up and down the line. After all, the British army only keep their men on the front lines for eight days at a time, before moving them back to reserve trenches for four days then another four days were spent in a rest camp that was built a few miles away from the fighting. This would mean that the wood and earth works would have received constant abuse. Finally, at one point the pair crawl past an abandoned British Tank. Historically fairly accurate in appearance, but the prop is obviously a one third scale – oops!

The plot of 1917 is simple and somewhat lame, but with a twist. The plot’s pointlessness does underscore the larger theme of the pointlessness of War. The replacement of the main focus-character during the movie (the twist) provides the greatest underscore of this. For the first third of the movie the focus seems to be on Blake who is asked to take the mission with an accomplice, and he picks Schofield. Blake is then killed off and Schofield becomes the main character. This takes the audience a little time to adjust too and is possibly a small mirror into what the men at the time also felt at the time. Blake death is also symbolic of how death come to many in WWI. Something distant suddenly becomes very real and kills you. In Blake’s case, a distant dog fight between three aircraft where the German plane is shot down, becomes directly involved with our characters and results in Blake’s death. In the Great War it was distant artillery and machine guns that killed most. Further along the trench lines to the South East of Écoust-Saint-Mein is the WWI Verdun war graves. There stands an enormous 450 ft. long Ossuary that contains the skeletal remains of at least 130,000 unidentified combatants from battle in and around Verdun where 26 million shells were fired in over 300 days. It stands as a reminder of the carnage wrought on humanity upon humanity. 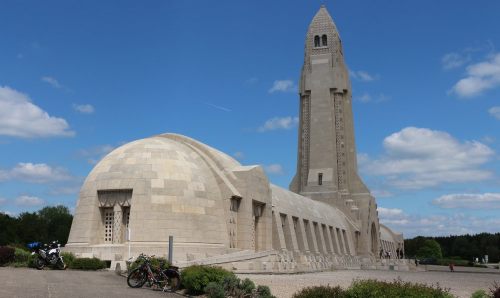 The movie is not without its technical or historical problems. For example, every one of the Germans that the characters meet; the German pilot, the sniper on the tower, the German soldier Schofield surprises in the town, all insist of “fighting until the death.” This setup is a trope, as by 1917, after three years of War, morale amongst the German troops was low. Also, how is it that a German sentry guarding the bridge, does not get support as soon as shots are fired? Nor is the sentry relieved by a shift-change at nightfall? No! Instead, this solo, wounded fanatic forgoes going to an aid station to attend his wounds and instead waits for our hero at the top of the dark tower, just so that he can shoot at him when he finally appears!

I do think the writers knew much about babies when they wrote the screenplay. A starving baby (milk only) would be red-faced and screaming all the time, sometimes sleeping from sheer exhaustion, only to begin crying again after waking. Instead, in this movie, we find a staving yet plump baby content to play finger and smile games with Schofield. Really? And when did Schofield get such great eyesight and knowledge of babies that he was able to distinguish that the baby was a girl across a dark room only lit by a small low lantern?

Despite the dark subjects covered in the movie, its poetry was appealing. Book-ending the movie are scenes of Scofield under a tree in an open field with a big sky above him. This image appears in the opening shot and the closing shot. The peaceful rural scene is a wonderful device to bring out thoughts in the viewer of “it never happened” and “how to forget what happened” simultaneously. The scene makes you think.

Would I watch the move again? Probably.

For me, 1917 was a portal that encouraged me to explore more about the “War to End all Wars.” This was probably Sam Mendes’s intention, and for this, the movie gets 5/5.

It is also timely to remember that French General Ferdinand Foch, commander of all Allied Forces at the end of WWI, made the following statement at the signing of the Treaty with Germany. On June 28, 1919, Foch declared: “This is not peace. It is an armistice for twenty years.” His prediction was only out by 65 days to the start of WW2.