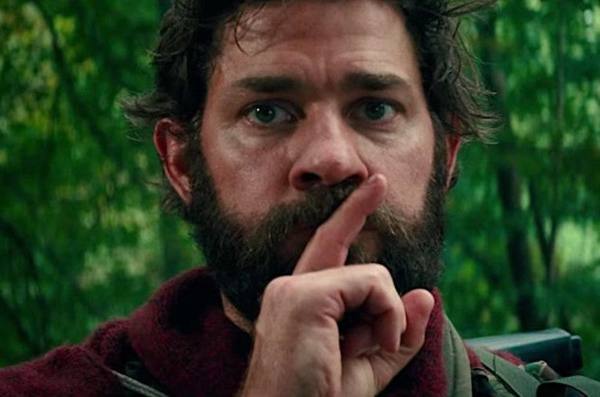 People are typically born with the ability to hear. We use it daily when we communicate, interact with the world around us. Is it possible to live without this sense? Well, it most certainly is. Some people are not able to hear so they must live with and adapt to using sign language. Even then, how can one adjust to the fact that they must not make a sound? Not even an effortless humming noise. A brilliantly written post-apocalyptic script by the horror specialists Scott Beck and Bryan Woods, tells us a story about a quiet and scary, fierce survival in a wild, harsh and demolished environment. If you make a noise, you will be hunted down by some mysterious monster.

A Quiet Place directed by John Krasinski, keeps up with the expectation of its title. The movie is indeed silent with, from time to time, minor noisy bursts of terrifying screams. Everyone watching can enjoy the cinematic ambient sounds of the water and the wind or footsteps on a gravel path. You will be enjoying those exciting ASMR sounds that may make you feel relaxed and stress-free. Others might scare you. These sound effects are the ones of the most exceptionally well-designed sounds I had ever encountered in a horror movie. They give us many details about the general mood of the scene. By merely listening to the sounds, we can guess and understand all the emotions that the characters feel. Sometimes, even jump scares can be predicted as there is a sudden pause when nothing can be heard.

If you fear the dark get ready to fear the quietness. The director makes sensible decisions on when it is the right moment to make some serious noise. He can genuinely disturb you. He knows that when the sound is not intense and is representing the environment, we are going to put all the mental effort into understanding the dense story. With this approach, he is instructing us to evaluate the complicated feelings of the characters, for example, by analyzing their facial expressions, we can see how terrified and worried they are. You will be captivated. Moreover, when we are invested in understanding the complexity of this storyline, he throws at us all the anticipated disgusts of a classic horror movie: The jump scares, the terrifying visuals of the creatures, the harsh overcast scream of the monster followed by someone getting murdered.

Viewers are introduced to the timeline of this movie by a title card saying “Day 89”. Next, we notice that a family is in a store searching for some resources. They look around, get some medications, and are extremely careful not to make any noise. We can quickly tell that the story is going to be tragic as children, three of them, appear to be spontaneous. The youngest of them, played by Cade Woodward, wants to get a shiny battery-powered rocket toy. He is reaching towards the toy and pushes it when it starts falling towards the ground. His father quickly catches the toy, stopping it from hitting the ground and potentially making a noise.

Not everyone was new to living in a quiet environment. One of the children characters, played by the brilliant Millicent Simmonds, is born deaf and is used to living without the ability to hear. She has accustomed to quietness. During the movie, you can see the parents, played by Emily Blunt and John Krasinski, using sign language to communicate with their children. However, this fear of being heard does not stop the boy from taking the toy. He takes it with him, bringing the potential danger to him and his family.

Later in the movie, it is getting evident that survival is very hard. The father is teaching his older son, played by Noah Jupe, how to survive, and how to gather resources on his own. He is telling him about the monsters and explaining to his child all the necessary information about them. The only known weakness of the creatures is that they are blind. They look robust, and their appearance is terrifying but other than that little is known about them. This fact, which is telling us that the monsters are foreign and alien-like, makes up one primary type of fear, the fear of the unknown. The director seems to understand human nature and human reflexes as he has a unique approach to the classic horror genre.

The movie is not trying to scare us just by utilizing scary monsters and jump scares. It is trying to be unique by using different types of essential human fears. During the whole movie, we can sense the fear of anticipation – that anytime something unusual might happen to one of the characters. We are shown many silent scenes, for example, a scene where a shotgun can be seen or a sharp nail pointing up from the floor. We don’t hear any sound, but we can predict what sounds those objects are going to make. This expectation of potential danger is something that can genuinely disturb us. We know what is coming next, but we do not know when.

When we were presented with another title card this time saying “Day 472” it seemed apparent that the characters adapted to the environment. After a couple of scenes, we find out that the mother is pregnant. How can a mother deliver a baby in that harsh environment? Besides the standard frustrations of future parents, these characters are scared for their future. How is the mother going to give birth without making a noise? The baby knows to cry. Even if the father is making plans on how to prevent the baby’s cries from being heard, it is not guaranteed that he will succeed. Everything slowly becomes uncertain and impulsive.

The first time I saw this movie was in an airplane on a flight to Chicago. Nonetheless, I instantly fell in love with it. The thing that fascinated me the most, besides an excellent tale, was the way the director told us this story of tragic yet straightforward characters. I liked what the movie has done with the sound and loved that, just by listening to it, you can imagine yourself in that gray and natural-looking environment.  When I re-watched this movie, a few days ago, I found out a lot of tiny details left on purpose that indeed upgraded my experience. I would highly recommend you watch this movie.

The only place where this film has some bumps and holes is the beginning. We aren’t told what had happened on earth before the monsters. We are left to guess. Was it an alien invasion, or was it some human experiment gone wrong? These mistakes may be fixed in a sequel A Quiet Place 2 which, after watching the original, I will be looking forward to seeing it in mid-2020.