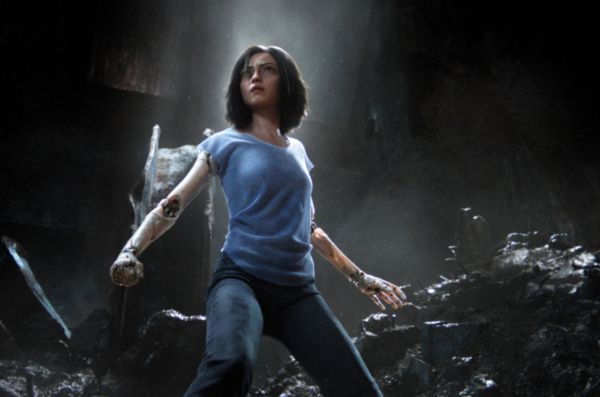 An instantaneous panoramic view of Iron City creates immediate excitement. Robert Rodriguez draws the viewers in by showing off the astonishing visuals that continue to amaze throughout the film. The attention to detail in crafting each individual aspect of this new realm is nothing short of spectacular. Creating a world that appeals too many is just the tip of the iceberg for Alita: Battle Angel. This manga masterpiece is brought to life with action, suspense, and even love.

Rosa Salazar (Maze Runner series), who plays Alita, is the main character of the film and spends the majority of it discovering who she really is. Since she was first discovered in a junkyard by Dr. Dyson Ido (Christopher Waltz), there is an immediate connection. The dramatic introduction of the two characters “meeting” pulls you in. From the time Alita first opens her eyes she is on a quest to discover herself. Dr. Dyson Ido brings her back to life and gives her a body she can use. While learning to adjust to her body, it is discovered that Iron City is filled with people with prosthetic limbs. The doctor, who brought Alita back to life, happens to be one of the best at this kind of work in the city. Alita and Dr. Ido have a relationship that is similar to a father and a teenage daughter. He is afraid of what the city will do to her, because she is different, and has certain guidelines he wants her to follow.

As any “daughter” would do, Alita disobeys the rules and meets a guy named Hugo (Keean Johnson). Through the adventures Alita has with him, she starts to discover just how powerful of a cyborg she is. Hugo helps Alita through diversity by building up her esteem throughout the film, which leads to a love interest that is vaguely developed. The lack of emotional attachment to certain characters made it tough to understand the decisions they were making. There was a dearth of chemistry between Alita and Hugo, which dulled certain events that happened between the two of them. Character development was a difficult theme in this film, with the exception of Alita and Dr. Ido. Alita was the name of Dr. Ido’s daughter who is no longer living. The body he used to create Alita is the same one that was made in an effort to save his daughter. This creates a strong bond between the two of them that develops naturally.

The action sequences being portrayed made up for the developmental issues. There was a great amount of suspense leading up to conflict that put the audience at the edge of their seats. Each battle would be a step up over the last, as Alita learned new skills in combat. The screenwriters, James Cameron and Laeta Kalogridis, made it difficult to predict the outcomes of individual battles as well as the film as a whole. The action packed sport of Motorball racing displays how much society enjoys violence. Being the greatest at this sport grants you a ticket up to Zalem, which is the desire for a significant amount of the population in Iron City.

Overall, the general emotion felt throughout the film is excitement. As Alita grows, those around her grow as well. She shows that even though people can be torn apart, there is always a way to put the pieces back together and help them grow. Even the worst individuals can see the light at the end of the tunnel.