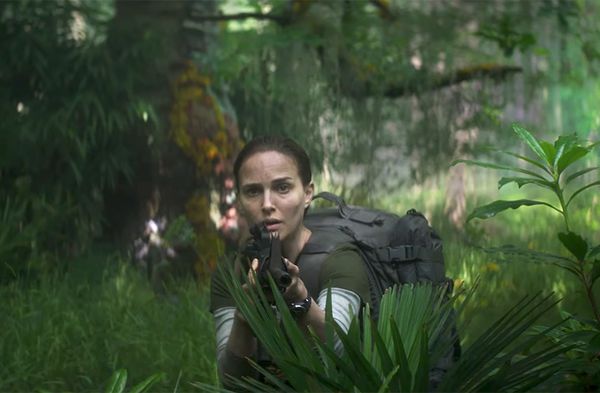 Annihilation is a novel by Jeff Vandermeer that has come to your local big screen. The director of the movie is Alex Garland, the director of Ex Machina. In Annihilation, a meteor strikes within a game preserve in the swamps of Florida. From this meteor, a shield termed “the shimmer” begins to spread outwards in all directions and anything that goes in never comes out. Our story begins with the protagonist Lena (Natalie Portman), an army biologist. Her husband Kane (Oscar Issac) is a part of a secret Roy force that remains unclear throughout the novel. The movie opens up with Portman believing her husband is dead because he has not yet returned from a mission that he departed over a year ago. However as she is painting their room, he walks in through the front door, up the stairs, and into the room, drawn and distant. She hugs him and begins asking him many questions about his mission.

However, he does not seem to have any knowledge of the situation and begins to vomit blood. En route to the hospital in the ambulance, government vehicles pull over the ambulance and knock Lena out with a sedative. She wakes up at a secret military based named “Area X” and begins to get interrogated by a psychiatrist Dr Ventress (Jennifer Jason Leigh) who also doubles as the base official. After she sees her husband in a coma with his condition deteriorating quickly, she decides she wants to go into the shimmer to find the cause. A group of 5 females enter the shimmer including: Lena, Dr Ventress, anthropologist Cass Shepard (Tuva Novotny), paramedic Anya Thorensen (Gina Rodriguez), and physicist Josie Radek (Tessa Thompson). Their mission has one final goal, to reach the lighthouse in which the meteor hit and get out.

On their way to the lighthouse, the team begins to notice many new strange half breed animals and plants, They get attacked by an alligator with shark teeth who almost kills Anya, and then a bear wolf that kills Shepard. They closer they get to the lighthouse, the more signs they see of Kane’s old team, even finding an old camping spot with a video tape left behind. On the tape it shows Kane and two others carving open the stomach of one of their team members. As his skin falls away, his insides begin to move like snakes and Kane drops the knife in the water. As Lena’s team is wandering the base, they come across a tumor like growth in the swimming pool, and Josie finds the knife in the water. Later that night, the bear attacks and kills Shepard and the group carries on in the morning.

As they prepare to camp again before nightfall, Josie makes the realization that everything in the shimmer is “refracted” back into the environment, including DNA. This explains all of the mutations and messed up gene pool. As the night falls, Anya begins to question whether or not her team is going crazy so she ties them up. She begins to interrogate each of the members as she tries to figure out if Lena killed Shepard. However, right as she is about to cut Lena’s stomach open, she hears Shepard’s screams outside. Frantically she sprints outside with a rifle trying to save Shepard. As the door opens to the tied up team, the bear walks in with its mouth open and Shepard’s scream pouring out. Right as the bear is about to kill the team, Anya comes in rifle blazing. The bear breaks through Josie’s chair and grips Anya by the throat, effectively killing her.

As the bear turns to Lena, Josie unloads a rifle clip into its head. With only three members left, Dr Ventress decides to leave by herself before the sun rises. Her curiosity and deteriorating health condition pushes her to leave the team. Around this time, both Lena and Josie begin to notice the gene mutations occurring within their own bodies. Josie decides to not “fight” the changes anymore and lets her mutation take over. As she walks away from Lena, she is seen sprouting plant branches and leaves from her arms. Lena loses sight of her around a corner and when she looks into the field, Josie is no longer there. Alone in the shimmer, Lena pushes forward. Around this time we begin to learn Lena had an affair with a colleague while Kane was away. As she nears the lighthouse, Lena finds the bones of Kane’s former team. Cracking open the lighthouse door Lena finds the room filled with white vines with a hole in the center and a skeleton burned against the side wall with a camera facing towards it. Playing the video, Lena soon sees her husband in the screen. However, this is where the movie begins to get tricky.

As the video progresses, Kane is seen talking to someone else with a grim voice. As Kane tells this mysterious person to “Tell Lena I love her”, the stranger fills the screen This other person, is Kane… Yes you heard me right. Kane is talking to a doppelgänger version of himself with the implication it is going to leave the shimmer. As the video moves along, Kane is given a sulfur grenade by his doppelgänger. He sits cross legged and pulls the pin on the grenade, dying in silence within the ball of fire. Lena then draws the courage to crawl into the hole, gun loaded. As she reaches the end of the black tentacle filled hole, it opens into a small chamber. Dr Ventress is seen talking to herself with her eyes appearing to be gone. As Lena approaches, Ventress’s eyes come back and she begins to talk to Lena. As the two characters exchange dialogue about what the aliens want, Ventress opens her mouth and a beautiful light begins to pour out. The room is soon filled with this alien light and Ventress’s body is slowly turning into this light.

With the transformation complete, the light is turned into a rotary of color resembling an eye. As Lena looks into the center and is drawn closer, a drop of blood floats into the center of the figure. Suddenly a humanoid figure begins to form. With a shimmer color metal, the humanoid figure begins to assemble until it is a piece of shimmer metal representing a human perfectly. Lena realizes to late and begins to run out of the chamber. As she enters the lighthouse, the alien is there reflecting every movement Lena makes. When she tries to fight it, it fights back. When she tries to run, it almost crushes her against the door. She drops to the ground unconscious and wakes up to the alien still reflecting every movement she makes. As Lena becomes more and more hopeless, the alien begins to morph with her facial features.

As doppelgänger Lena is staring Lena right in the face, Lena grabs a sulfur bomb and hands it to the alien. With both the doppelgängers and the real Lena’s hands around the bomb, Lena pulls the pin and runs away at the last second. The alien bursts into flames. As the alien is slowly burning, every altered from that contained the shimmer particles begins to slowly burn. As Lena leaves the lighthouse and the alien crawls, burning, into its chamber, everything is shown to be burning down that the alien had affected. We come back to a room that Lena is getting interrogated in by men in hazmat suits. She finishes telling the story and asks to see her husband, who is now recovered. As the two reunite, Lena asks Kane “if it is really Kane or the alien”. Kane responds with I don’t know. He asks the same question in return, and Lena just hugs him. She never responds…. As the movie is drawn to a close, Kane’s eyes are seen changing into shimmer colors, with Lena’s doing a more subtle change.

In his interpretation of the novel, Garland brings a variety of color and brightness that somehow seems dangerous. As the screen changed hues and my eyes are mesmerized by the colors, the undertone I was receiving danger within the beauty. The visuals of this movie were excellent, keeping me in a trance by this alien, but human, environment. The acting in this movie is decent with Portman doing an excellent job selling her role. Even though there was not a lot of personal attachment to the characters, I did not want them to die. They each had unique, likeable traits that made them seem like normal human beings. We do not receive much backstory about the characters, but I still felt as if I knew them. This may be in part due to their attitudes and roles on the team. However, even though there was foreshadowing of the members death throughout the film, the movie did a good job keeping me on my toes on the aspects of their deaths.

The plot line in this move was excellent and was executed perfectly by Garland. However, I would have liked more backstory rather than flashbacks on Lena’s behalf. If I had felt more of an emotional connection to Lena, it would have made the film even better. Although this seems like a standard sci-fi/thriller movie, it gets above and beyond when it comes to the metaphorical and figurative layers. Every action, scene, and plot twist had layers of meaning that could be interpreted differently depending on the viewer. Each character death led to a major theme of fighting, running, or letting death take you. Although there were many metaphors and analogies laid throughout the film, the ending left me feeling confused, but breathless at the same time. As the credits begin to play, I found myself staring at the screen, brain is shambles, as I tried to comprehend what I had just viewed.

After a serious 15 mutes of hard thinking, I began to make theories about the ending. Was it the monster that escapes and was trying to persevere with an excellent lie? Or was it really Ln end forever changed by the shimmer? Yet, it was not these questions that gave me a lasting impression about the movie. The questions that made this movie stand out from any other movie were those of figurative or metaphorical concepts. I know what you are thinking. No one cares about the analogies or metaphors. Trust me, I usually just show up for the explosions, car chases, and adrenaline as well. Yet, as I walked out of this theater, my mind twirling, I began to ask myself questions that did not have to do with the plot line, but with the message he was trying to convert.

Was Garland trying to say that we must kill our old selves to become better new people? Was he trying to say that in our modern culture we care to much for material or surface things (the shimmer Lena) and if we do not develop strong morals or relationships that it will lead to our downfall? This movie is the most layered Sci-Fi/thriller/action movie I have ever seen. It still has me questioning and trying to find new endpoints a week after I viewed it. This movie has created a lasting impression on me that I will never forget.

It is a piece of art that is receiving negative reviews for being confusing. It is not meant to be a “see bad guy and shoot” type of movie but rather a movie that should invoke questions about your own life. It is not a surface movie, but rather a deep meaningful one. For all of the reasons listed above I give the movie a 10/10, for excellent acting, plot, visuals, but most importantly, meaning. This is a must see. Whether on the big screen, or on your cellular device, check this movie out, and I promise you will not be disappointed.