By Fergus McGillivray (Upland, California, US) 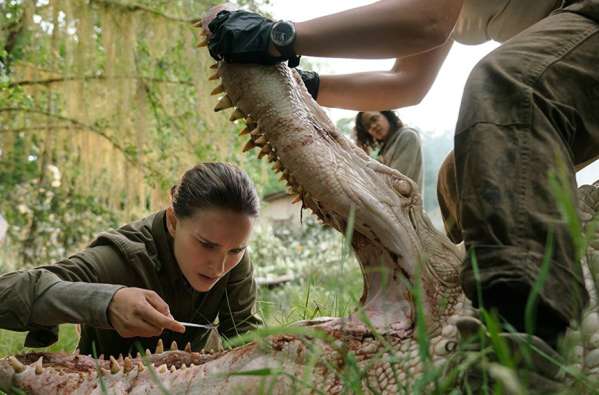 A film featuring a mutated alligator with an appetite for people very well might be the best of the year so far.

One might read that line and assume Hollywood has had a pretty rough start to 2018. Luckily, there’s a whole lot more to Alex Garland’s knockout sci-fi/thriller Annihilation than said reptilian nightmare. (Though the alligator scene is pretty cool.)

Garland’s adaptation of the first installment of the Southern Reach trilogy by Jeff VanderMeer follows a group of scientists venturing into an ethereal, iridescent bubble, appropriately referred to as the “Shimmer,” which has enveloped and mysteriously altered a now thickly forested expanse in Northwest Florida. The government has quietly quarantined the territory, naming it Area X, and seeks to put a stop to the rapidly-expanding Shimmer before it bubbles its way into a major city. All previous missions into Area X have failed and their teams have vanished, albeit not without traces. A sensational, refreshingly female-dominated cast lends their efforts to the film, led by a reliably superb Natalie Portman as Lena, a biology professor with a military background. Lena is joined by Ventress, an unnervingly detached psychologist, and Anya, a paramedic – each portrayed through standout performances by Jennifer Jason Leigh and Jane the Virgin’s Gina Rodriguez, respectively – as well as anthropologist Cass (Tuva Novotny) and physicist Josie (Tessa Thompson). Ex Machina star Oscar Isaac gives another great performance as Lena’s husband Kane – the only returning member of a previous mission into the Shimmer.

Like Ex Machina, Annihilation demonstrates Garland’s talent for gripping an audience with a unique brand of visceral dread, quietly but steadily building the feeling as the plot progresses. The Shimmer has a beautiful and captivating ambience, but as Lena and the team delve into the colorful, vibrant forest and toward its core, Garland hints at dangers and disturbing forces at work. The hints range from faint and subtle to quadrupedal and hungry. I quickly found myself trapped in a riveting, borderline stressful, yet hopelessly addictive cycle of balancing attentively on the very edge of my seat, recoiling in horror, and being reeled back in. Garland’s signature tone works in perfect harmony with a score that guides the audience through the forest with a lonely, haunting acoustic guitar, gradually twisting into an otherworldly, electronic utterance as the secrets of the Shimmer begin to unfold and the film nears its final sequences.

By the time the third act arrives, you will have cultivated and dismantled countless questions and inferences, none of which will prepare you to have your mind scrambled to the extent that Annihilation will scramble it – in the way that a good sci-fi film should. In fact, Annihilation is not good, but great. One way or another, this one will stick with you, be it the outstanding cast, the eerie yet alluring atmosphere, or, certainly in my case, a particularly imaginative, horrifying, and extremely well-executed scene involving a certain forest creature. (Hint: it gives The Revenant a real run for its money).

To those last few sci-fi nerds still worrying since 2014 that Alex Garland is too good to be true: know that I was one of you until Thursday evening. Rest assured, Ex Machina was no beginner’s luck, and Garland has a lot more to show us that we have never seen before. Now, with Annihilation under his belt, Garland has quite possibly directed two of the best sci-fi films of the decade – competing only with Denis Villeneuve’s multi-Oscar nominated Blade Runner 2049 and Arrival – and a pair of rock-solid thrillers to boot. Annihilation is in very good company. This weekend, give your second viewing of Black Panther a rain check and treat yourself to this sci-fi tour de force.

Lomax: Can you describe its form?
Lena: No.
Lomax: Was it carbon based?
Lena: I don’t know.
Lomax: Did it communicate with you?
Lena: It reacted to me.
Lomax: You really have no idea what it was.

Lomax: Can you describe its form?
Lena: No.
Lomax: Start from the beginning.

[to her husband]
Lena: What do you think I do when you’re away? Do you think I’m out in the garden pinning, looking up at the sky?

[referring next to her in bed]
Lena: Why aren’t you here?
Kane: I got to leave a day.

[referring to her husband who is in a coma on a life support machine]
Lena: Let me see him.
Dr Ventress: He’s extremely ill.
Lena: You have to tell me where he was, what he was doing?
Dr Ventress: It was his decision to go in. It was something they termed, the shimmer.

Dr Ventress: Did your husband contact you at any point while he was away?
Lena: No, it was his decision to go in.

Lena: Why did my husband volunteer for a suicide mission? You have to tell me where he was, what he was doing.

Dr Ventress: They’ve sent in drones with teams of people, but nothing comes back.
Lena: But something has.

Lena: I need to know what’s inside. I could save him.

Dr Ventress: You’re a biologist, you served in the military.
Lena: If I knew what happened I could save his life.

Dr Ventress: The boundary is getting bigger, it’s expanding. We’re talking cities, states.
Lena: We need to know what’s inside. So do I.

[inside the boundary]
Lena: It’s beautiful.

Lena: Check this out. It’s like they’re stuck in a continuous mutation.
Dr Ventress: Anything interesting there?

Cass Sheppard: Sharks have teeth like that.
Lena: Not possible. You can’t cross three different species.

Lena: What is it?
Dr Ventress: The soldiers on the last expedition.

Anya Thorensen: They went crazy or something in here killed them.

Cass Sheppard: We have to go back.
Lena: I can’t go back.
Dr Ventress: We can camp here tonight.

Lomax: What did it want?
Lena: I don’t think it wanted anything.
Lomax: But it attacked you.
Lena: It mirrored me. I attacked it. I’m not sure it even knew I was there.
Lomax: It came here for a reason. It was mutating our environment, it was destroying everything.
Lena: It wasn’t destroying. It was changing everything. It was making something new.
Lomax: Making what?
Lena: I don’t know.