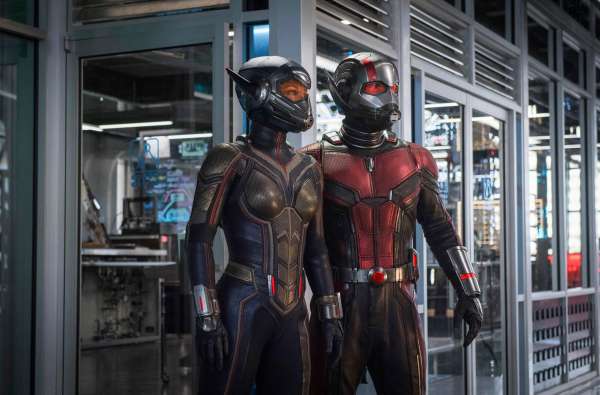 Despite a sizeable bump early in production, the first Ant-Man movie proved to be a nice surprise, devoid of the self-serious bloat that hampers so many Marvel movies. Ant-Man and the Wasp, like its 2015 predecessor, is again a genial affair, and even though it does bog down at times, due to the expectedly overloaded exposition and introduction of multiple new characters, this remains solid, lightweight fun.

Set after the events of Captain America: Civil War, Scott Lang (Paul Rudd) has been serving out a lengthy sentence via house arrest. Now nearing the end of his cramped detention, Lang is looking forward to properly re-uniting with his daughter Cassie (Abby Ryder Fortson) and ex-wife Maggie (Judy Greer), who is still seeing police detective Paxton (Bobby Cannavale). Keeping a close eye on Lang’s movements is FBI agent Jimmy Woo (Randall Park), who wants to make sure he has zero contact with Dr. Hank Pym (Michael Douglas) and his daughter Hope Van Dyne (Evangeline Lilly), the former having created the suit Lang used to help Captain America in Germany. Hank and Hope are angry at Scott for taking the suit without their permission, with the resultant destruction caused forcing them to go underground to continue their scientific research.

When Scott has a vision one night, pertaining to Hank’s wife Janet (Michelle Pfeiffer), it sparks off a re-teaming between these three disgruntled colleagues, who have to find out what this ‘dream’ means, and if Janet can actually be rescued from the Quantum Realm, where she has been trapped for the last thirty years. The scale of the mission again requires the help of Scott’s well-meaning associates, Luis (Michael Pena), Kurt (David Dastmalchian), and T.I. (Tip Harris). Hot on their heels is not only agent Woo, but also black arms dealer Sonny Burch (Walton Goggins), and Ava (Hannah John-Kamen), a mysterious, dangerous opponent nicknamed ‘Ghost’, who are both after Hank’s Quantum technology, but for very different reasons. Turning up on the scene too is Hank’s old work partner, Dr. Bill Foster (Laurence Fishburne), who may be able to assist the heroes in achieving their end goal.

As one can see, there is a lot going on, and this is always where the frustration comes in when watching a Marvel movie, with too many variant plot connections and new character backstories weighing down what should be breezy, efficient viewing. While a new film will of course see the introduction of new participants and subplots, Marvel movies are always unnecessarily overburdened with them, a number of which are there simply to connect the current film you are seeing with numerous others past, present, and future. It’s amusing when references to other entries do appear, but the Marvel Universe takes this several steps too far. With the type of classic homages brought up here, including nods to Them (1954), The Incredible Shrinking Man (1957), and Fantastic Voyage (1966), where the longest running time is 100 minutes, it emphasises how two hours is just too long for this kind of comic book adventure.

With the introduction of these new individuals, especially Ava and Foster, existing characters are pushed to the background, notably Maggie and Paxton, odd given how much the theme of family is pushed throughout proceedings. The role of Ava is awkwardly structured, with five writers (including Rudd) attempting to instil some sympathy toward her unfortunate situation, but too often project her as a conveniently one-note villain.

Performances help smooth over these bumpy moments considerably, and everyone seems to be having a good time. Rudd is likeable as always, and his comic antics hit the bullseye more often than not this time around, which is a particular relief after the extremely disappointing Ideal Home, which also starred skilled British comedian Steve Coogan. It must also be said that Rudd and Guardians of the Galaxy star Chris Pratt have strong similarities in looks, persona, and comic delivery, so it will be very interesting when and if they share screen time together.

Rudd shares excellent chemistry with his co-stars, starting with Douglas (who can also be currently seen in the deliriously entertaining Animal World) and Lilly, and it’s the convincing connection between this trio which makes the whole endeavour click together nicely. Add Pena, Dastmalchian, and Harris (with Pena’s Drunk History-style storytelling getting a hilarious workout here), whose plentiful ad-libbing thankfully isn’t as hit-and-miss as it was in the first film, and this makes for an endearingly lively group.

Fishburne does what he can with limited screen time; John-Kamen (Ready Player One) struggles with the film’s weakest character; Goggins (The Hateful Eight, Tomb Raider) is predictably typecast as a villain; while Pfeiffer shines in her handful of scenes. A number of these characters are set-up clearly to appear again in future instalments.

Peyton Reed (Down with Love), who helmed the 2015 hit (replacing original director Edgar Wright), keeps things moving most of the time, but does stumble when dealing with the script’s most convoluted plotting. There is no doubting however that Reed displays greater confidence in handling his second, large-scale outing.

As expected the visual effects are first-rate, with special praise going to the technology used to make several actors look young again. Your jaw will drop at just how convincing it is, and it certainly opens a Pandora’s Box over who we could see back on the big screen.

Ant-Man and the Wasp is an effective antidote to the plethora of po-faced superhero movies that have been filling cinemas in recent times, and for those who enjoyed the first film, will definitely find much to like in the sequel. One just wishes that the film-makers could focus more on the story at hand, rather than smothering it with an overwhelming, Lego block-style template, obviously executed to fully maximise franchise sequels, prequels, and spin-offs. A number of these efforts would benefit greatly from such a singular approach. Finally, make sure you stay through the end credits.