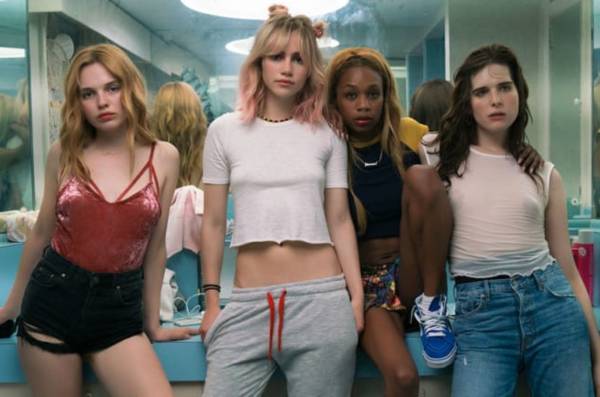 Aesthetics are everything for Sam Levinson’s gory feminist flick, Assassination Nation. A film that seems to be a hybrid of Pretty Little Liars and The Purge, it’s easy to say it has a unique flare that subsequently has created a genre of its own: A campy satirical female-driven blood fest. Who wouldn’t want to watch?

The visuals of this film seem to be what hog most of the attention from viewers. AN thrives with its visual tension and visual comedy, creating a movie experience that feels as though you’re observing an art piece at a museum rather than watching a storyline unfold on the big screen. We are constantly being met with upside-down camera angles, brilliant color schemes of neon that set the mood, artistic poses of each character and thrilling camera pans that give you the excitement and adrenaline as though you’re on a rollercoaster ride.

Every shot in this movie is well thought out and sharply choreographed. In an era of film where most movies simply focus on storyline with zero creativity or utilization of camera work, it is refreshing to see Assassination Nation bring back the “art” of film. Yet where the cinematography thrives, the storyline often lacks. Although the movie is extremely fun to look at, the characters are often dull. But that might be the exact point…

In the world of Instagram, it is our outward self that is praised and admired rather than our personalities. How you look is usually what gets you “followers” and “likes” both on and offline. This is especially true for women in our society, who are trained from a young age by media influences that looks will get you places rather than who you truly are as a person. This commodity of women that they have created online will always be more popular and praised than their authentic selves, so long as we continue to live in a nation that bursts with misogyny.

This notion that the world only wants a glorified version of women is expressed brilliantly through our main character, Lily Colson. Our protagonist claims that no one ever wants the real you, they just want little pieces of you. Your laugh. Your smile. Your cute little outfits and perfect hair.

Nobody wants a three-dimensional woman, because then that makes her an actual human being with flaws and anger and character. All things that stop her from being this stand-there-and-look-pretty fantasy girl that all the men around her desire.

This comes through in many ways throughout the film. Lily’s boyfriend won’t eat her out, because he refuses to see her as a human being who can experience pleasure. Men want to kill her (literally) for having a sexuality in the first place. In other words, a woman in Trump’s America who is not a timid sexless mouse deserves to die.

In many subtle and extremely blunt ways, this movie screams feminism. It embraces female sexuality, waving a giant sex positive flag in your face which most audience members will find jarring and vial simply because they aren’t used to the fact that women might enjoy sex too. In fact, about seven different people left the theater in the middle of the film, shaking their heads while my friends and I only leaned further at the edge of our seats towards the cinematic masterpiece.

It has been a while since I’ve seen a film with as much guts (literally and figuratively) as Assassination Nation. Screamingly unapologetic, messy, and fun, it is a film with a necessary statement, yet doesn’t quite hit the landing on being a massive hit.

Don’t get me wrong, this movie is good. Maybe even really good. Creative. Spunky. But in order for it to be brilliant, it needs to have more. More dynamic characters. More interesting relationships between said characters. That way, each time these characters almost get killed (which is a LOT of time), we will actually give a damn whether they live or die.