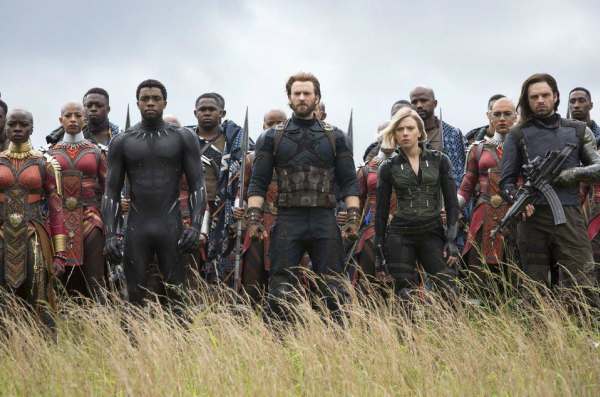 In terms of plot, this review is spoiler free. However, it does allude to some specific character interactions and discusses the overall tone of the film, as well as its main strengths. Though these are inconsequential out of context, those wishing to walk in completely blind should avoid this and every review or reaction they come across. You possess more willpower than I.

For all the rest who have ravenously consumed every bit of marketing and are both desperately eager to see the results of an 18-film buildup and desperately anxious to see if the Russo brothers pulled it off, know that I felt just as thrilled and just as paranoid walking into the first-ever screening of the biggest superhero movie of all time. Take a deep breath and relax. Avengers: Infinity War delivers. It is not a perfect film and struggles at times to contain itself in the 2.5-hour runtime, but the thrills are electrifying, the dialogue is priceless, and the villain steals the show, which is a very good thing.

Joe and Anthony Russo distributed screen time smartly and efficiently to a whole slew of Avengers in Captain America: Civil War, the work that earned them the Infinity War job. Evidently, the practice paid off, as this time, the Russos mostly manage to effectively balance their 30-some significant characters, many of whom have never shared the spotlight before, including a villain big enough (literally) to occupy center stage all on his own. The dream team-ups are executed flawlessly and potentially risky crossovers due to competing larger-than-life heroes use that competition as a bonding mechanism and often a hilarious punchline. (The largely one-sided rivalry between Chris Pratt’s Star-Lord and Chris Hemsworth’s Thor is particularly delightful.) Granted, some characters still feel underused and of the majority that do get sufficient screen time, a few still feel less than impactful. A love story between Scarlet Witch (Elizabeth Olsen) and Vision (Paul Bettany) could have used a bit more time to ripen and Bucky Barnes (Sebastian Stan), the focus of the Russos’ last two Marvel entries, is merely along for the ride.

The heroes are as fun as ever, but the core of Infinity War is its big bad. Josh Brolin, through stunning motion-capture, gives the film its strongest asset: the titan Thanos. It’s been a few years now since Thanos strapped on the Infinity Gauntlet in the post-credits scene of Avengers: Age of Ultron and growled “I’ll do it myself,” and boy, does he. For the first time in a decade of films, our heroes face real risk. The stakes are finally high enough that no one is safe. When Thanos inevitably goes toe-to-toe with the heroes, it not only makes for some of the most exhilarating and creative action sequences ever put to screen, but also some of the most anxiety inducing, as our favorite characters to whom we’re hopelessly attached get thrown into harm’s way, for real.

Brolin’s Thanos is menacing, mighty, and exceedingly clever, but most dangerous of all is his ruthlessness. Thanos has horrible, insane ideas about the best way to “balance the universe,” but he differs from previous villains in that he readily admits the abominable nature of his plans. He simply believes so strongly in his cause that he is willing to sacrifice what no one else will. Brolin’s performance lifts the character far beyond his relatively simple goal, exposing his heavy emotional burdens and guilt that accompanies his actions. The Russo brothers take advantage of every subtlety of Brolin’s performance, down to the twitch of his eye and the rumble of his voice, to create a believable MCU villain worthy of its superbly-written heroes. On paper, you want to hate Thanos for his genocidal tendencies, but Brolin’s dedicated and deep portrayal makes it impossible. Though the film demands repeat viewings and reevaluation, it’s possible that Black Panther’s Killmonger (Michael B. Jordan) faces dethronement as the best villain in the MCU.

Avengers: Infinity War takes massive risks, both in positioning its villain a main protagonist and, without spoiling anything, in the way that things play out. Because of these risks, it emerges as one of if not the most riveting but also frustrating chapters in the series. It is overstuffed, without a doubt, since no major studio has dared release a 3-hour blockbuster since The Return of the King (200 min), and some characters suffer as a result. However, Infinity War delivers in spectacle like never before, and does what it set out to do: give this series a real, powerful, dangerous villain. The rules have changed, the stakes are raised, the scale has grown. Whatever’s next for this older, wiser Marvel universe, bring it on.