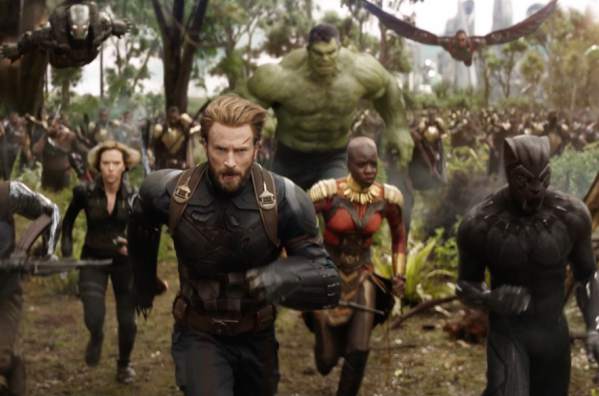 10 years ago, a film released on May 2nd changed the course of film history as we knew it. In that space of 10 years, we have watched this franchise spread its wings far and wide from a genius arms dealer in an Iron Suit, to an African King writing the wrongs of a history tainted by racism. Marvel has taken this seemingly inconceivable world and turned into a reality before our very eyes, and this 10 years of Iron Man, Captain America and Thor, has lead us to Infinity War.

Firstly, I take my hat off to the Russo brothers Anthony and Joseph as well as producer Kevin Feige, for taking a movie concept as far and wide in content as this and executing it at a level this succinct, is more commendable than any of ensemble films created prior. Infinity War is Marvel’s greatest undertaking yet, and as a fan of the franchise and of the source material, I must say it is near perfect. Thanos, “the man in the chair,” the man who each film has slowly been building up to since the first Avengers movie in 2012, makes an impact like no other villain in the franchise.

For a character who has been mentioned and talked about on and off during multiple films, but never truly fleshed out, Thanos comes to be one of the most rounded and cause driven antagonists in the Marvel franchise to date. The man who seeks to erase half the existing life in the universe is not as simple as we would believe. Thanos is a layered character, that is built up throughout the film and his goals become all the clearer as the film continues. The creation of his backstory and his relationship with Gamora, in particular, are executed in a way that creates layers of conflict within Thanos. The tragedy of his home planet succumbing to extinction due to overpopulation and lack of resources all reinforce that relentless will to execute his goal by way of the infinity stones and gauntlet.

But let’s talk about the film, how does it go down? How do they pull together this narrative in a way that the story translates cohesively and sequentially?

Each point of action has an important role to play, whether it’s forging a weapon to kill Thanos, or protecting one of the Infinity Stones, the underlying thread that ties the film together is Thanos himself. His threat and the magnitude of his presence is what gives the film a true driving force, whether it’s his domination of Hulk in combat or his tears as he kills Gamora, the gravitas of his character is undeniable. When moving from each point of action to the next, the film and its characters are all progressing towards an inevitable endgame and this is where the importance of “the threat” becomes pivotal. Not one person undersells how much of a threat Thanos and his goals are, and that is why the execution of the ending sequences is so important.

Even though the Russo’s do build depth in Thanos, it is the final arc of the film that is pivotal to whether this film would be a success or not. After Thanos singlehandedly thumps the team of Iron Man, Spiderman, Doctor Strange and the Guardians, he teleports to Earth where he engages with the other half of the Avengers to retrieve the final stone embedded in Vision’s head. After having retrieved every other stone he makes quick work of the team and finally reaches Vision. Using the ex-machina powers of the gauntlet to undo all efforts to stop him, and like proclaimed in the beginning, with the click of his fingers his goal is finally achieved. The tenacity it takes to erase roughly 16 high-profile characters from the film, is pure cinema perfection and reiterates the “nothing held back” attitude that both the Russos and Kevin Feige have with this franchise.

This ending sequence, crushes the souls of cinema goers, watching the King of a nation disappear before the eyes of his most loyal soldier or watching Peter Parker disappear into ash in the hands of his helpless mentor as he softly says, “I don’t want to go” and even watching teenage Groot slowly disappear as Rocket watches in horror. These powerful scenes all lead to one thing, the undeniable fact that every person who has watched this movie is obligated to see the next. The next instalment in the Avengers franchise is precisely this “unmissable.” Though 10 years built up to this near perfect introduction of Thanos, it is almost certain that the next film will be the biggest and most fulfilling film of all.

It is quite unfathomable, that after all this time, Marvel keeps us wanting more. But it just does. Like many people say the super-hero genre is over saturated and is dying, but who cares? Companies like Marvel are making amazing films, sure they are “blockbusters” but they’re not bad movies. Now, I’m not saying that Infinity War is perfect, there are issues with the film that I will highlight later. But what I will say is that, whether it’s the ambiguous foreshadowing by Doctor Strange, the fidelity it keeps to the source material or the number of curveballs the film throws at you. The fact is, Infinity War is an overwhelming success, with the mere click of a finger I believe the franchise has turned a bold new page, and I can only hope the next instalment is as unforgettable as this.

Before I finish on such a happy note I would like to point out several large issues with the film. This begins with Scarlet Witch and Vision. This love story is the bane of my existence, it cripples the film in a sense that destroying the infinity stone in Visions head would have easily been a small sacrifice to make in the event of mass genocide. The lapse in any logical reasoning for Vision not to actually force Scarlet Witch to complete the task is unfathomable. Furthermore, the treatment of Thanos’ Henchmen (The Black Order) is embarrassingly poor. These characters are on par if not stronger than most of the Avengers, yet they are easily slain in quite an easy fashion, the most disappointing of the being Ebony Maw. Ebony Maw is one of the most powerful of The Black Order, a master of Telekinesis and rivals Doctor Strange in the magical arts, yet, he is killed by a reference to the movie Aliens, a literal low blow to comic book fans everywhere.

Lastly, the treatment of characters as if they are stupid, this happens on three separate occasions. First when Nebula is being tortured by Thanos and Gamora gives up the location of the Soul Stone, second is when Starlord breaks up the near imminent defeat of Thanos after the news of Gamora’s death and lastly, the most insulting of all, Thor driving the Stormbreaker axe into Thanos’ chest instead of cutting off his arm. these are all wise and intelligent characters, who have each dealt with emotional turmoil before, but, this is purely stupid. It honestly belittles the characters to actual idiots, I mean Thor is easily to blame for half the entire universe getting erased, isn’t he?

But I digress. You can’t perfect everything, and you need plots to progress somehow, these are but some of the issues I have with the film but, weigh in very little to what the film gets right. If you haven’t seen the film, I’m sorry you’ve read this because it’s ruined now, but if you have I hope you loved it and already booked another ticket to see it again cause it’s damn worth it.