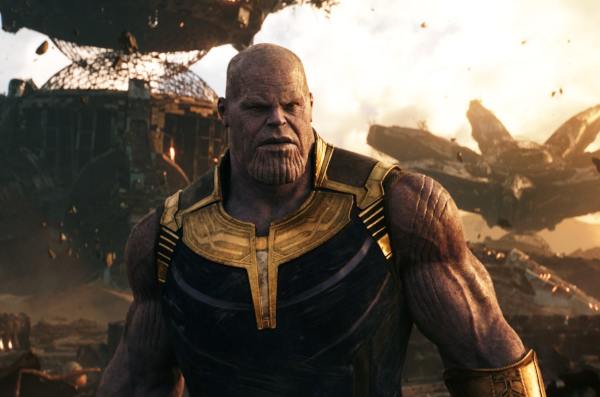 Avengers: Infinity War is a Spectacle & Does Not Disappear with a Snap of the Fingers!

The beginning of the end of the current iteration of the Marvel Cinematic Universe (MCU) directed by brothers Russo (Joe & Anthony) is an unprecedented comic book superhero joyride that manages to almost perfectly balance an impossible roster of characters with an emotionally grounded twist on the traditional hero’s journey.  Despite its title, the film spends most of its time fleshing out the villain Thanos, putting him in more of a protagonist role to the multitude of heroes’ antagonists.  ‘The Mad Titan’ (Josh Brolin’s Thanos) was first teased at the end of the first major crossover in Marvel’s The Avengers and received a full debut in the cosmic adventure Guardians of the Galaxy.

Infinity War opens up on a distress call from the Asgardian ship full of refugees from the recently fallen Asgard (as seen in Thor: Ragnarok).  Thanos’ quest for the six extremely powerful infinity stones is in full swing, having already acquired the Power stone by going through Xandar (a conquest that occurs off-screen).  The huge purple villain tortures Thor and Loki (Chris Hemsworth and Tom Hiddleston) to the effect of acquiring the Space stone after a brief but revealing bout between Thanos and The Hulk (reprised by Mark Ruffalo).  This leaves the remaining Reality, Mind, Time, and Soul stones for Thanos to complete his Infinity Gauntlet and control the universe at the snap of his finger.  Before destroying Asgard’s ship entirely, Thor’s friend Heimdall (Idris Elba) manages to conjure dark magic and send The Hulk hurling through space towards Earth so that he can warn the rest of the Avengers of what’s coming.

Thanos’ Black Order (consisting of Ebony Maw, Proxima Midnight, Corvus Glaive, and Cull Obsidian) are his loyal ‘children’ who are sent to collect the Mind (currently held by Vision) and Time (currently held by Dr. Strange) stones that are on Earth while Thanos continues on to retrieve the Reality stone (held in Knowhere by Benicio Del Toro’s The Collector).  The audience finally gets a moment to breathe as we check in on fan-favourites Tony Stark (Robert Downey Jr.) and Dr. Strange (Benedict Cumberbatch), who are meeting for the first time and are duelling with their equally massive egos.  Bruce Banner (The Hulk’s alter-ego) and Wong (reprised by Benedict Wong) bring their teammates up to speed on Thanos’ quest to wipe out half of the universe to save the universe from overpopulation, and Banner urges Stark to call Steve Rogers (Captain America played by Chris Evans).

Stark hesitates to make the call due to the rift caused during Captain America: Civil War and, before he can, New York is attacked by Ebony Maw and Cull Obsidian.  Meanwhile, Scarlet Witch (Elizabeth Olsen) and Vision (Paul Bettany) are romancing in Scotland when they are ambushed by Proxima Midnight and Corvus Glaive.  Thankfully, Cap’s Secret Avengers (Anthony Mackie’s Falcon and Scarlett Johansson’s Black Widow) show up to save their skin.  This leads the team to Wakanda to enlist the aid of Black Panther (Chadwick Boseman) and crew, including a reunion between Cap and his old sidekick Bucky Barnes (Sebastian Stan) a.k.a. The Winter Soldier (newly reformed as per the post-credits scene in Black Panther).

In outer space, the Guardians of the Galaxy (Chris Pratt as Starlord, Zoe Saldana as Gamora, Bradley Cooper as Rocket etc.) encounter Thor and must decide to help him acquire a weapon of great power or pursue Thanos in Knowhere and ultimately they decide to split up so that they can do both.  This sets up a multi-faceted final act involving a showdown with the Black Order in Wakanda, the ultimate battle with Thanos and the heroes on Titan (Thanos’ homeworld), and a side quest with Thor, Rocket and Groot (hilariously dubbed team Pirate Angel, Rabbit & Tree).  There is so much action and state-of-the-art special effects in this major motion picture that you have to see it to believe it.

For the most part, every character is given a moment to shine; while majority of the characters that exhibited secondary roles in Avengers: Infinity War are likely to get a bigger spotlight in the follow-up film Avengers: Endgame to be released in April 2019.  Where this movie may lack in depth of story it picks up in pacing and tone.  The six infinity stones are the clear Macguffin, however, they have been teased and explored across 18 other films spanning a decade and have earned their place in the established MCU.  Thanos is on a smash-and-grab and will stop at nothing to achieve his goal.  The events of Civil War leave the Avengers team fractured and they are playing catch-up the whole time Thanos and company is making moves.

This film functions brilliantly as Thanos’ movie, but also manages to escalate the drama for most every character that you have come to know and love in the MCU (Ant-Man and Hawkeye’s absence since Captain America: Civil War are explained in a line of dialogue, but rest assured they should return in Avengers: Endgame).  The Russo’s had the tallest task yet to deliver a crossover of this magnitude with 20+ characters, and they do not disappoint!