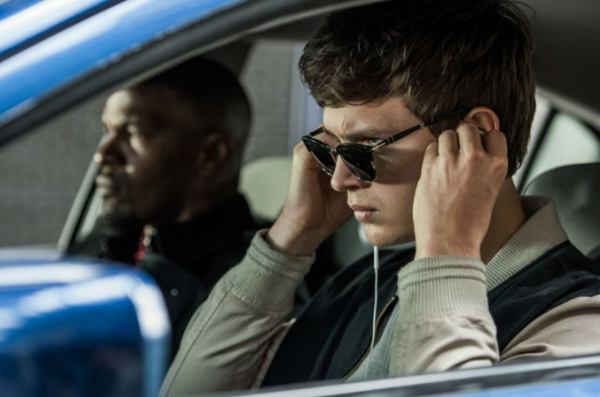 Baby Driver is an excellent action movie directed by Edgar Wright, who’s directing credits also include Shaun of the Dead and Hot Fuzz.

Ansel Elgort plays ‘Baby’, a young man who is a car-jacker turned getaway driver, following a car accident when he was young, suffers from tinnitus and listens to music through headphones to drown out the sound of the humming. He is pressured into working for crime kingpin ‘Doc’, played by Kevin Spacey, as the driver for a crew in a number of robberies. However, when he meets and falls in love with a beautiful young waitress, his life takes a drastic turn.

This is an extremely fast-paced, exciting movie with some of the best car chase action sequences I have seen on film. The direction is superb and the first act of this film just grabs you and takes you along for the ride with stunning cinematography. The writing, acting and direction of this film really make the story come alive and it feels genuinely believable. ‘Baby’ is a good person who is a great driver and he is drawn into something he’d rather not be in and is desperate to get out of. The criminals are seriously nasty as a major contrast to Baby’s character.

The movie could be classed as an action-drama as there is real depth to the characters, it’s personal but also very dark. There are, of course, some really gripping action scenes, with incredible stunts.

The soundtrack of this movie utilises songs and music to perfection, and they all serve a purpose. They are so incorporated and integrated by the editing that they flow in perfect sync with the action your seeing.

The dialogue in the movie is witty at times, but you also get invested in the characters and their situation.

The casting is magnificent. Ansel Elgort is remarkable. He has a minimal amount of lines and so much of his performance relies on facial expressions, and you can read so much in his eyes. There are stellar performances from Jamie Foxx and John Hamm too. Kevin Spacey is on form yet again, delivering so much emotion without too much expression. This is something Spacey does so well, he can deliver a lot of dialogue very fast and in a deadpan manner so well, take a look at the film 21 as a great example. Lily James plays ‘Debora’, the love interest for Baby, who appears halfway through the film.

But this is, for me, the weakest part of the film. From the intensity and speed of the first act, the second act is considerably slower. There is still some action happening but it’s slowed down by the fact that it’s difficult to invest in the romance. It was set up so quickly and there was no real character development or depth to it, and she makes life-changing decisions for both Baby and herself in a split second without much thought, and the relationship didn’t feel strong enough to warrant or justify them, and the believability of the romance didn’t really work for me.

The third act picks it all back up again when Baby making choices about how he wants his future to be, and we get some more amazing action sequences and terrific performances.

It’s down to the brilliance of the direction and the captivating performances given by the amazing actors that kept the film interesting, even when the romance fell flat.

As I said, the direction in this film is outstanding, there is barely a boring shot, everything looks so slick, the cinematography and camera work is excellent.

Aside from the romance which felt hurried, Baby Driver is an entertaining and exciting movie with a great cast, great action and a fantastic soundtrack.