Beauty and the Beast (2017) Movie Review 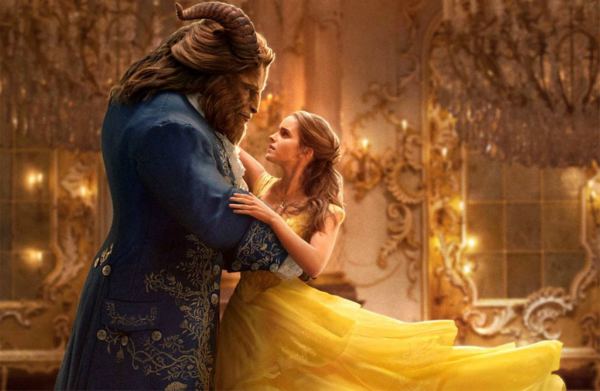 Disney have certainly embraced an environmentally friendly mindset with their new, live-action version of Beauty and the Beast, dutifully recycling much from the studio’s 1991 animated classic. So much so in fact, that you begin to ask why does this film need to exist. The answer is of course, money, and this professionally crafted package is going to make a lot of it.

Opening with similar narration, but coupled with an elaborate sequence to plainly illustrate its plot set-up, we see an arrogant prince (Dan Stevens) indulging in excessive behaviour, all within the confines of an enormous castle. Cursed by a magical traveller who he treats with contempt, the prince is transformed into a terrifying beast, while his servants are turned into various ornaments and pieces of furniture. The spell can only be lifted if someone expresses their love for him.

The beauty of the title is Belle (Emma Watson), a smart, headstrong young woman who lives in a small, provincial village, helping her clock-fixer father Maurice (Kevin Kline) as best she can, but longs for something more fulfilling elsewhere. Belle is forever harassed by the narcissistic Gaston (Luke Evans), who has chosen that she will be the one for him. Enthusiastically following Gaston at every turn is loyal colleague LeFou (Josh Gad).

As everyone knows, Belle ends up becoming a prisoner of the Beast, but through the help of his bewitched staff (voiced by actors such as Ewan McGregor, Ian McKellen, Emma Thompson, and Stanley Tucci), slowly draws this mismatched duo together, sparking romance and hopefully breaking the curse.

The 1991 Beauty and the Beast was a grand affair, one of the highlights of a dream run Disney had between 1989 (beginning with the Oscar-winning The Little Mermaid) and 1997 (the hugely entertaining Hercules), and was the first animated film to be nominated for Best Picture at the Academy Awards. Gorgeously designed, blessed with a great voice cast, and crammed with tuneful songs, this was a movie that was brimming with energy, and thoroughly deserved its critical and commercial success.

What is odd about B&TB17 is a lack of genuine passion, and its extensive imitation only amplifies the hollow nature of the entire enterprise. The exact-to-similar shots, along with the implementation of the same songs (by Alan Menken), initially evokes an amusing sense of nostalgia, but this quickly turns into annoyance and then outright bewilderment, as a feeling of redundancy soon hangs over proceedings. So much effort has gone into giving audiences something they’ve seen before.

This awareness of repetition and familiarity makes all the story add-ons feel like just that, and do nothing but bloat this simple fairy tale to a completely unnecessary 129 minutes. The three extra songs (again by Menken) don’t enhance the characters’ journey in any meaningful way, while magnified story intricacies seem like mere padding, or fail to deliver the intended dramatic impact intended by the film-makers (such as the fate of Belle’s mother, which strangely comes across like a second-tier vignette from a Charles Dickens novel).

Performances suffer from this constricted framework and approach. Emma Watson looks the part and is likeable enough, but just doesn’t have that true screen presence to carry a large-scale production. Also working against Watson are the songs, with her voice tuned and tweaked to sound like Belle circa 1991, so whenever those numbers begin, you are immediately distanced from her, as Watson doesn’t appear to be given the opportunity to make her own, individual impression. The recognisable visual touches only add to the artifice.

The same goes for Dan Stevens. Though the majority of his work is witnessed through motion capture technology, the fact that his features, expressions, and even his voice are formed and fashioned to look and sound exactly like his 1991 incarnation, once more cancelling out any unique touches he may have brought to the role. Though mostly known from the hugely popular TV show Downton Abbey, as well as the new Marvel series Legion, audiences should track down an under-seen comedy/thriller called The Guest, directed by Adam Wingard and co-starring Maika Monroe (It Follows). Darkly humorous and sharply written (by Simon Barrett), this allows Stevens to show us what he’s capable of.

The voice cast do what is asked of them, although McGregor cheerfully appears to be channeling John Cleese’s taunter from Monty Python And The Holy Grail.

Surprisingly, it is probably Luke Evans who comes off best, emulating the self-satisfied Gaston as lively as possible within the strict confines of the production’s construction. Mostly known for more adult fare, such as The Girl on the Train, No One Lives, and Ben Wheatley’s superb but highly divisive High-Rise, Evans looks like he is enjoying doing something considerably lighter.

Josh Gad (who provided the voice of Olaf in Frozen) has the time of his time as LeFou, and his character is what this new rendition of Beauty and the Beast will be remembered for. The safe, facsimile temperament the surrounding film displays makes his moments stand out even more, and his big number with Gaston is the one time where director Bill Condon genuinely has fun with what are highly interpretive lyrics (which could even suggest that Gaston himself is actually bi-sexual). This one sequence contains the kind of energy and buoyancy that the rest of the film is missing.

The direction by Condon (who won an Oscar for the terrific Gods and Monsters) unfortunately lumbers and meanders, needlessly protracting a timeless love story to the point of complete disinterest. He also seems to have brought with him those horribly computer-generated wolves from Twilight: Breaking Dawn Parts 1 and 2. Considering it has a budget nearing $200 million, it still baffles how effects like this can still end up looking so substandard. The screenplay lacks heart, with Stephen Chbosky and Evan Spiliotopoulos merely attaching the updated sub-plot ‘apps’ to the 1991 composition.

The generation who weren’t around when the 1991 version of Beauty and the Beast was released, will probably be delighted and enthralled by Disney’s live-action redux, which has been knowingly polished to an alluring shine. For those of us who were, once the retro sensibility wears off, a distinct emptiness takes over, only springing to life when same sex viewpoints come to the fore. As memorable as the animated version is, however, both can’t hold a candle to Jean Cocteau’s beautiful 1946 film, the perfect, quintessential adaptation of Gabrielle-Suzanne Barbot’s 1740 novel and Jeanne-Marie Leprince de Beaumont’s 1756 tale. If you have not seen it, then please race out and do so.