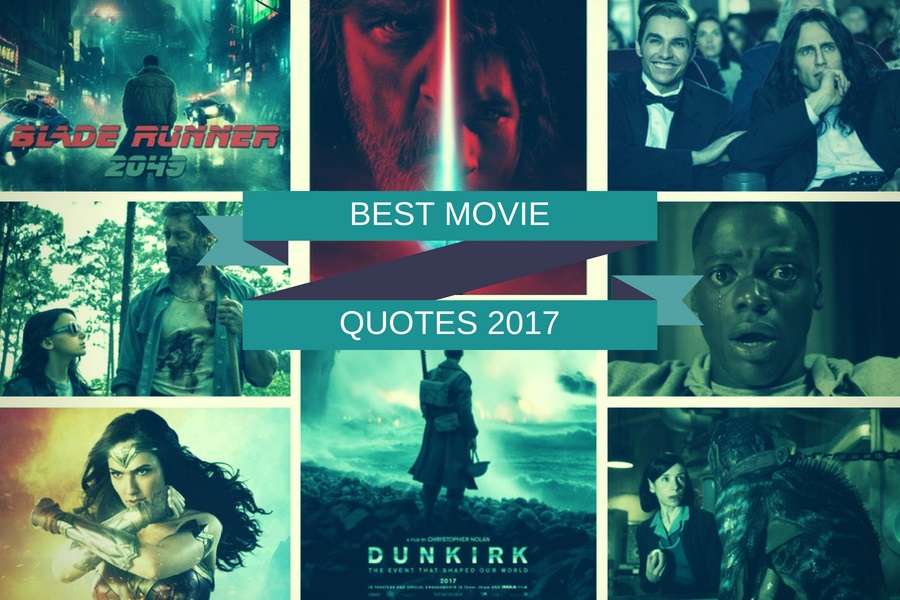 Here’s our pick of the top movie quotes of 2017 in alphabetical order.

Bats: What the f**k is this mask?
JD: Austin Powers.
Eddie: Doc said Michael Myers!
JD: This is Mike Myers!
Bats: It should be the Halloween mask.
JD: This is a Halloween mask!
Bats: No, the killer dude from Halloween.
JD: Oh, you mean Jason.
Bats, Eddie: No!

People say a lot of things in anger. It is our choice whether or not to listen.

Terry: Love, love isn’t easy. That’s why they call it love.
Kumail: I don’t really get that either.
Terry: I know. I thought I could just start saying something and something smart would come out.

Rick Deckard: Sometimes to love someone, you got to be a stranger.

Mr. Perlman: We rip out so much of ourselves to be cured of things faster than we should that we go bankrupt by the age of thirty and have less to offer each time we start with someone new. But to feel nothing so as not to feel anything, what a waste!

[sneezes as Dante gets close]
Head Clerk: I am terribly allergic.
Miguel: Well, Dante doesn’t have any hair.
Head Clerk: And I don’t have a nose, and yet here we are.

Viscount Halifax: We’re facing certain defeat on land, the annihilation of our army, and imminent invasion. We must negotiate peace talks.
Winston Churchill: When will the lesson be learned! You cannot reason with a tiger when your head is in its mouth!

Rod Williams: I mean, I told you not to go in that house. I mean…
Chris Washington: How did you find me?
Rod Williams: I’m TS m*therf**king-A. We handle sh*t. That’s what we do. Consider this situation f**king handled.

Dina: You know, I got some bomb a** kush if you want to take a hit.
Lisa Cooper: Where did you hide it?
Dina: Where the sun don’t shine.
Lisa Cooper: You know what, that can cause a lot of infection.
Dina: Girl, you can’t get no infection in your booty hole. It’s a booty hole.

Daphne Milne:  Life is full of horrible things. One must find something that makes one happy and stick to it.

P.T. Barnum: No one ever made a difference by being like everyone else.

Bill Denbrough: Look, you don’t have to come in with me, but what happens when another Georgie goes missing, or another Betty or another Ed Corcoran or one of us? Are you just going to pretend it didn’t happen like everyone else in this town? Because I can’t. I go home and all I see is that Georgie isn’t there, his clothes, his toys, his stupid stuffed animals, but he isn’t. So walking into this house, for me, it’s easier that walking into my own.

Tonya Harding: There’s no such thing as truth. I mean it’s bullsh*t! Everyone has their own truth. And life just does whatever the f**k it wants.

Charles Xavier: You know, Logan, this is what life looks like. A home, people who love each other, safe place. You should take a moment and feel it.

Ronsel Jackson: I went to fight for my country to come back and find it hadn’t changed a bit.

Paddington: If we’re kind and polite the world will be right.

Ben Bradlee: What will happen if we don’t publish? We will lose! The country will lose!

[referring to the creature; interpreting Elisa]
Giles: When he looks at me he does not know how I am incomplete. He sees me as I am.

Peter Parker: So, to become an Avenger, are there like trials or an interview?
Tony Stark: Just don’t do anything I would do, and definitely don’t do anything I wouldn’t do. There’s a little grey area in there and that’s where you operate.
Peter Parker: Oh.
Tony Stark: Alright.
[just then Tony reaches over Peter, thinking that he’s hugging him Peter puts his arm around Tony]
Tony Stark: That’s not a hug. I’m just grabbing the door for you. Alright, kid. Good luck out there.

Yoda: The greatest teacher, failure is.

Charlie: [to Mildred] All this anger, man, it just begets greater anger.

Caesar: I did not start this war. I offered you peace. I showed you mercy. But now you’re here, to finish us off for good.

Jane Banner: Shouldn’t we just maybe wait for some backup?
Ben: This isn’t the land of backup, Jane. This is the land of “you’re on your own”.

Ares: They do not deserve your protection!
Diana Prince: It’s not about deserving. It’s about what you believe, and I believe in love.