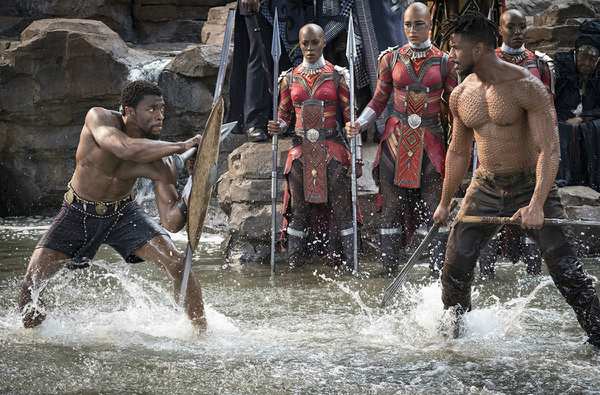 Black Panther claws its way to being the movie that changes society. Ryan Coogler (Creed) directed what seems to be another sure hit. Black Panther, and its impeccable cast, has delivered a “Superhero” movie unlike anything that has been seen. King Ta’Challa (Chadwick Boseman) and Erik Killmonger (Michael B. Jordan) along with the supporting cast performed their roles in such a fashion that made it difficult at times to root against the villain. Diving into the deep past of Killmonger made the villain seem so much more relatable than a typical superhero bad guy. Having to grow up without a father really hits a strong point and helps the audience understands what drives the villain to perform the actions he does.

From the first scene entering Wakanda to the last scene this movie challenged the current cultural norms that we live by today. Living in an unconventional country with what seems to be unlimited technology at their disposal did not hinder the impact on how important the art and culture was. It instantly opens up the mind of everyone watching from little instances in the way the people of Wakanda talk and move to the way they celebrate their traditions. Royalty like qualities can be sensed in every individual based on the wide variety of ways they are dressed and express themselves.

Seeing Black Panther for the first time in action since Captain America: Civil War depicted a deeper understanding of his fighting style and his reasons for fighting. The meaning of “what do you fight for?” plays an essential role in this movie not only for Black Panther but for other supporting cast members as well. Okoye (Danai Gurira) and Nakia (Lupita Nyong’o) not only give a sense of enlightenment but also shows that in Wakanda it does not matter if you are a man or women, it just matters that you stay true to your beliefs.

Shuri, (Letitia Wright) and the younger sister of Black Panther, offers her own perspectives through advanced technology that puts Tony Stark to shame. She embodies every part of scientific advancement through always wanting to improve every aspect. I feel that the women show such power in this movie which brings out the strongest parts in the male leads. Each role complimented another by age and sex not being the driving factor in decision making.

Wakanda has been a hidden secret for so long due to the way society has become with its greed and power hungry urges. Shielding their city from the rest of the world is not an action that everyone agrees with. The advanced technology both in the medical field and weapons department could put Wakanda on top of the world’s power throne. A strong aspect of the film shows that with power comes challenge and challenges may lead to disagreements.

The decision making process that a king goes through is heightened by other perspectives. Options depicting the type of king Ta’Challa wants to be are strongly reasoned throughout the film. Without the rise of Killmonger the decisions may have been much different in the form of less risks being taken. The human side of Black Panther is also seen in the film. Being the Black Panther is more than just a suit, a deep look into what attributes one must have is deeply illustrated by showing what kind of man the Black Panther is without the enhancements.