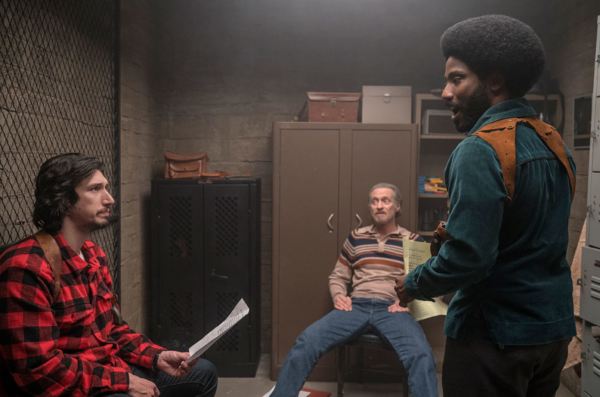 BlacKkKlansman is the new Spike Lee Joint, is about a black police officer from the Colorado Police Department who infiltrated the Ku Klux Klan. This film stars John David Washington, Adam Driver, Laura Harrier, Topher Grace, Ryan Eggold, and Jasper Paakonen. The film takes place in the early 1970’s, as Ron Stallworth (Washington) becomes the first African-American police officer in the Colorado Springs Police Department. Soon after he makes a phone call to the local captain (Eggold) of the KKK, and the captain wants to invite Ron into the KKK. Knowing Ron is black he can’t show up to the meeting and has to get a white officer to play the in-person version of Stallworth. Together they create one of the funniest and greatest police stories of all time.

This is a fantastic movie, but the best part of the film is the acting. John David Washington, who is actually the son of Denzel Washington, is phenomenal in this film. This is one of his first films and he killed it. His performance in this film is so amazing that he just took the film to a whole new level. His co-stars are also great in this movie. Adam Driver and Laura Harrier give career best performances and prove they are A-List actors. Jasper Paakonen is also great in this film. He could eventually become an A-List actor in the future if he keeps getting these roles. But the best supporting actor in this film by far is Topher Grace. He plays the Grand Wizard of the KKK, David Duke. He plays the part so well and just makes you laugh and hate him at the same time.

Spike Lee once again proves his genius at filmmaking. Sadly, it seems as if Spike never gets the credit her deserves, even though he proves time and time again that he is one of the best directors around. Which is weird, because except for the subject matter, it didn’t really feel like a Spike Lee Joint. Spike also co-wrote the screenplay with Charlie Watchel, David Robinowitz, and Kevin Willmont, who worked with Spike for the movie Chi-Raq. The screenplay is written masterfully, with no dull moments, and lots of the usual Spike Lee comedy. BlacKkKlansman features a lot of funny moments, but the funniest moments are the phone calls between Ron Stallworth and David Duke. The way Ron Stallworth tricks David Duke into thinking he is a pure-white red-neck American is one of the funniest things I’ve seen all year.

The editing is also on point by never making an odd cut, or transitioning something to quickly. This is probably one of the films that is most likely to win Best Film Editing at the Oscars this year. The last positive I have for this film is the score. It features a nice mellow sound that feels oddly well for this type of film but works well enough to earn a nomination for Best Original Score.

The only problem I have with this film is the length. It feels a little long at 2 hours and 16 minutes. It feels like the film probably could’ve been condensed to 2 hours, but this just a minor problem to a fantastic film.

Overall, BlacKkKlansman is one of the best films of the year, maybe even making itself into a few Top 5 lists. BlacKkKlansman has been nominated for 6 Academy Awards including Best Picture, Director, Supporting Actor, Adapted Screenplay, Original Score, and Film Editing. This is probably one of the best Spike Lee Joints, and for that it’s a must see.