Bombshell New Quotes – ‘These are the end times.’ 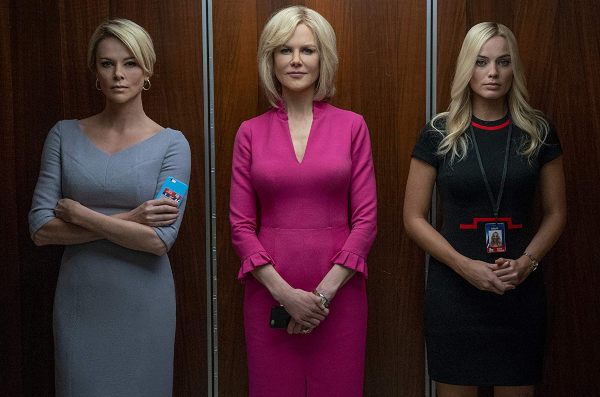 Drama directed by Jay Roach based on the true story centering on the former Fox News chief Roger Ailes (John Lithgow) and his ultimate downfall that came about after a number of women, including Megyn Kelly (Charlize Theron), and Gretchen Carlson (Nicole Kidman), sued him for harassment.

Kayla’s Boss: You have to adopt the mentality of an Irish street cop. The world is a bad place. People are lazy morons. Minorities are criminals. Sex is sick, but interesting. Ask yourself, “What would scare my grandmother, or pi** off my grandfather?” And that’s a Fox story.
Kayla Pospisil: Oh, it makes so much sense.

[as they watch one of their Fox & Friends shows]
Gretchen Carlson: [jokingly] HRs on the phone, because you called me a skirt.
Brian Kilmeade: Yeah, I got to read that manual again.
Gretchen Carlson: The attitude off camera was even worse. “You’re a man hater. Learn to get along with the boys. You’re sexy, but you’re too much work.” I have a whole list.
Nancy Erika Smith: Will other women come forward?

[on the her show The Kelly File]
Megyn Kelly: You may have heard, there was a dust up, involving yours truly, and presidential contender, Donald Trump.

Roger Ailes: [to Megyn] Nobody stops watching because of a conflict. They stop watching when there isn’t one.

Megyn Kelly: You do understand, I have to be above this right?
Douglas Brunt: You know, the entire country is talking about your period right now.

Kayla Pospisil: I want to convince you that I belong on air, Mr. Ailes. I think I’d be freaking phenomenal on your network.
Roger Ailes: I could pluck you out and move you to the front of the line. But I need to know that you’re loyal. I need you to find a way to prove it.

Edie: [to Megyn] You know why Roger’s got that door blocking his office.

Jeanine Pirro: We need everyone on Team Roger.
[throws Team Roger t-shirts to the employees]
Kimberly Guilfoyle: Get it on. Put it on.

Kayla Pospisil: These are the end times.

Jeanine Pirro: [to Kayla] Sweetheart, this is an island of safety and truth.

[turning to Megyn and Kayla during their tense elevator ride]
Gretchen Carlson: Hot in here.
[the elevator stops, Gretchen and Kayla get out as Megyn looks at them walking away]

What do you think of Bombshell quotes? Let us know what you think in the comments below as we’d love to know.