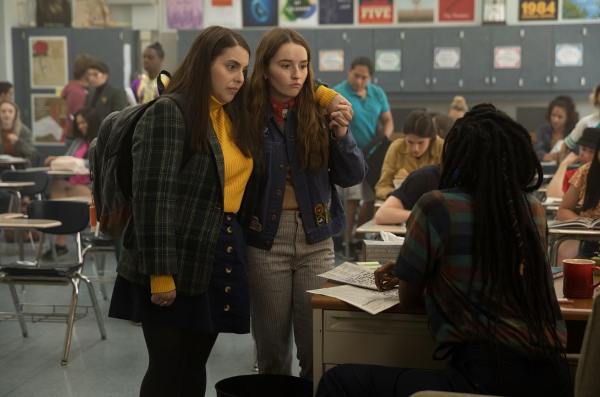 Olivia Wilde’s directorial debut in Booksmart starring Kaitlyn Denver and Beanie Feldstein is a worthy successor to Superbad in the American High school canon, updating the field for the female perspective and bringing with it a refreshing sense of authenticity.

Taking place in the streets, car parks and large houses of suburban Los Angeles Booksmart invokes the power of young female friendship which despite recent efforts from Edge of Seventeen and Lady Bird remains an under explored area of contemporary Hollywood cinema.

Taking place across a very special 24 hours – the last 24 hours before graduation – the film’s primary narrative focus is on the sudden realisation from our two protagonists that very shockingly, they have missed out hugely on the fun side of high school and the only way to remedy this would be an effective gatecrash of the cool kids graduation party. Such a move would represent a flaunting of the rules and regulations that have come so far to define their time in education.

Molly played by Feldstein is determined to the point of myopia while Denver’s Amy is somewhat more phlegmatic but remains principled and more naturally hesitant. Their chemistry however is electric and is the consistent backbone in which the film rests upon. The credibility of the friendship saves the film in certain somewhat shaky moments in the opening act in particularly and the film enjoys its best moments when the two actresses are given ample space to prove how convincing they really are as two teenage best friends.

The narrative drive of Booksmart could not even most generously be described as original but it is the authenticity and fleshed out nature of even the more minor high school player which distinguishes the film as being too brave to merely rest on tropes and clichés. Characters you expect to play a certain role or to act as a crude plot device are progressed to the point of indulgence effectively allowing Booksmart to be more subversive than certain predecessors.

The film’s screenplay is mostly witty, tight and fast paced, but granting sufficient space for individuals to shine. Aside from the odd superfluous moment it would be challenging to say there were segments deserving to find themselves on the cutting room floor.

However, before characters are established and the plot is set Booksmart only splutters. Granted this spluttering is only a 20 minute long episode, but still the moments in which our characters navigate the school corridors, setting up the world of Booksmart are not wholly convincing. The dialogue is not wholly persuasive and the hyper speed in which the film shuttles around here is enough to prompt uncertainty. For 20 minutes Booksmart is too much and hardly funny.

Once however, the stakes are set and the stage is made for Feldstein and Denver to rift off each other the film’s weaknesses are overshadowed and the Wilde shows enough to suggest she is a gifted director. One particular sequence in the film’s climactic set piece alone suggests exceptional film-making. Credit too for the soundtrack which is both topical, complimentary without ever being patronising or derivative.

Booksmart’s greatest strength is that it gets better as its run time progresses, to the point where the third act is legitimately excellent cinema. Moments which may at first description appear trite or underserved are well done and credible as the characters are loved and respected. The film remains admirably upbeat and tells a tale which has been admittedly told before, but does it with artistic flair and trust in its characters.

The highs and lows of mid teenage life are done well here and are presented with enough flair and imagination to breathe some new energy into Hollywood’s High school collection.