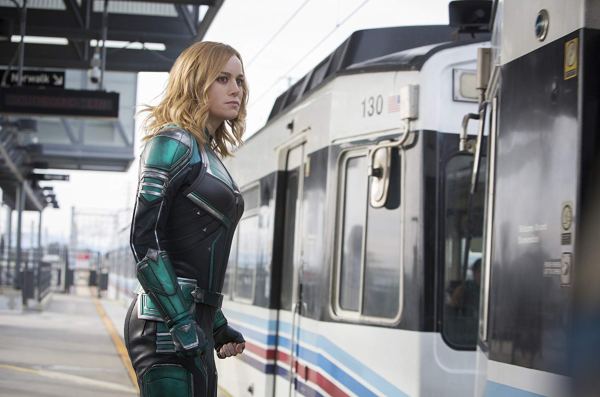 This has been one of the most anticipated movies of the year but it will not be one of the best. Don’t get me wrong Captain Marvel is a good movie and an ever better superhero but it just doesn’t hold up to the expectations.

The movie is a tie in for the Marvel Universe in order for Avengers: End Game to make sense and being able to fully include the character. Alas, the movie feels like just that: a tie in.

Often the action feels rushed and more eager to explain how it fits into the overall Marvel story rather than the actual story of the heroin.

Captain Marvel is the answer to DC’s Wonder Woman. It is the first Marvel produced movie revolving primarily around a female hero….and it’s about time. But while the movie is certainly entertaining it isn’t what it should be: an example for teenage girls to stand up for themselves and take charge of their lives.

The character of Vers (Carol Danvers’ Kree name) feels more like a teenage girl than a soldier let alone a hero. Right from the beginning it is clear that this movie is not going easy on the comedy and is not going with the serious route they took with most Marvel characters.

Every time Brie Larson opened her mouth there is a quip or sarcastic reply coming out of it. Sure it is funny at first but it gets old very quickly.

Luckily Samuel L. Jackson provides a more serious element to the movie and his usual charm and unique acting style often provide comic relief in the right situations. His chemistry with Larson is flawless and it is a delight to watch these two act together.

Brie Larson is an extraordinary actress and I have rarely seen an actress or actor that can express so much with her face. The emotion she can convey with just a look or a simple tug of her eyebrow is astonishing and while the character often feels a little too quirky and over the top, Larson still delivers a very good performance.

One person deserving an honorable mention is Annette Bening. She has very little screen time but her performance is simply mesmerizing. Whenever she was on screen I was simply drawn to her. I don’t know why she hasn’t won an Oscar yet but I hope she will win one soon.

Another underrated actor, Ben Mendelsohn, here playing a Skrull named Talos, is as always terrific in his role. He has a rather serious role but whenever he is on screen it feels genuine and serious.

This also is one of the last movies that we get to see Stan Lee appear in. If I am not mistaken it is his second to last cameo but it doesn’t take away from all the amazing characters he has created.

I have noticed that there are a lot of pop culture references in the movie and while they are not as extensive as in Ready Player One, they are very uncharacteristic for Marvel movies. I know the movie plays in the mid-nineties, but some explanations or demonstrations of common objects just seem unnecessary.

When it comes to CGI, however, Marvel as always did a perfect job. Especially the cat called Goose (when you see the movie you know why the name is spot on) is a scene stealer.  The last twenty minutes of the movie are a prime example of perfect CGI and it is some of the finest CGI work I have ever seen. Now while all that is nice there are a few things that bothered me about the movie.

Most of us know that the reason Fury summoned Carol in the Infinity War post credit scene is that she is the most powerful Avenger and probably their only chance of beating Thanos and reversing the snap. However while most of her powers are shown in the final act of the movie it is not clear how Captain Marvel could be of assistance in the quest to bring back the fallen heroes.

(Spoilers ahead: I know she is supposed to be able to time travel but we never get to see that ability in the movie)

The second thing that bothered me is that the movie lacks imagination. It is an origin story and while it is told in a different way there are some parts that just feel rushed. It is very obvious that Marvel wanted make this movie quickly so they could be up to speed when End Game finally hits the theaters.

I often had the impression that Marvel was so focused on making the final Avengers movie a worthy ending that they put a little less effort in this one and forgot how important the character is for the next phase.

As most Marvel movies this one also has post credit scenes. One is a mid-credit scene the other one comes after the very last word has faded from the screen.

Let me give you some advice. The mid-credit scene is definitely worth waiting for and it directly ties into the end of Infinity War. The post-credit scene is a different story. It is supposed to be entertaining but trust me you will be disappointed and it is definitely not worth the wait.

In conclusion I can say that the movie is definitely worth watching.  But folks trust me when I say for this movie a 3D viewing is not necessary. There are only a few scenes that will actually work for 3D but they are not worth the extra money. So stick to 2D. You will have a good time and have saved a few bucks.

Captain Marvel is a movie that fits in the Marvel Universe and that was due for a long time. It is an entertaining movie and while, like Infinity War it lacks a little edge, it still is worth watching.

If you enjoy superhero movies or simply if you are the Marvel fan this movie is a must see but even you aren’t into that kind of thing you still will have a good time.

In the end I want to thank the late Stan Lee for making a decade of superhero movies possible and introducing all these amazing characters into our lives.