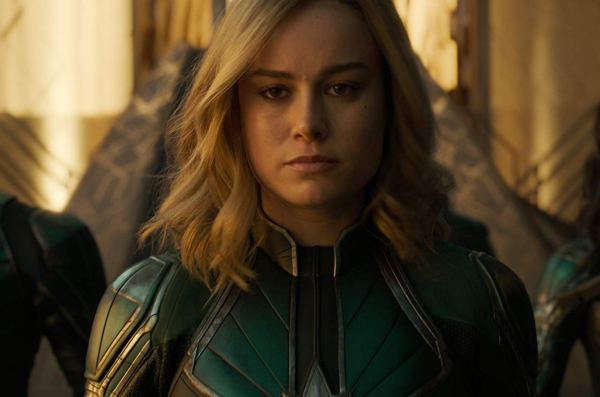 I posted a movie review for Venom on here last year, and just like that movie, I was skeptical walking into the movie theatre to watch Marvel’s first female-led movie due to some of the criticism I’d been hearing about it.

It produced the same result: I’ll admit this film is not without its flaws, but I enjoyed what I saw despite the criticism I had heard.

Anna Boden and Ryan Fleck’s Captain Marvel is a brilliant debut for future female-led superhero movies in the Marvel Cinematic Universe. The industry certainly has a whole plethora of outstanding female characters, such as Peggy Carter, Shuri, Natasha Romanoff, and Brie Larson’s energy-wielding Carol Danvers can stand proudly beside all of them.

The movie itself gets off to a slightly rocky start, the dialogue feeling a little forced in places, however we need this to get an image Danver’s life as Kree warrior, alongside co-stars Jude Law and Gemma Chan, fighting in an intergalactic war. This, I felt began to stop when our heroine fell to Earth and the movie started to pick up the pace, with plenty of action, emotion and humour, especially involving my new favourite cat, Goose.

The cast as a whole did a good job, with Samuel L. Jackson in his role as a much younger Nick Fury and Clark Gregg returning to the cinematic universe as an Agent Coulson just starting his work as an agent of SHIELD (sorry, had to make that pun). We see a much more comical side to Fury’s character which I felt was a nice to see – as well as how he came to wear the infamous eye patch – however, Ben Mendelson as a green pointy-eared shapeshifting alien really stole the show for me. His character, Talos, is definitely the most three dimensional and when I think about the film now, he is the first thing that comes to mind.

Larson and Lashana Lynch, playing Carol Danvers best friend and fellow pilot, Maria Rambeau, have great chemistry which really helped give impact to the emotional moments, particularly with Rambeau’s daughter, Monica, played wonderfully by Akira Akbar, a child in a movie who manages not to be irritating in any way.

Overall, I would still have to say Thor: Ragnarok is still my absolute favourite Marvel movie, however I left the movie theatre after watching Captain Marvel – of course after seeing the post-credit scenes – with a rush of adrenaline and a spring in my step. Some have accused this movie of bashing white males, but I didn’t see that. Rambeau remarks ‘let’s show these boys how it’s done’ but this was set during a time when women being a part of the military was still quite new, and this isn’t something that happens throughout the entire film. Just like DC’s Wonder Woman, it shows that a woman can lead a superhero movie that attracts both a male and female audience, and as origin stories go, this has a nice twist, but that would give away the whole plot of the film.

Comedy, action, 90s tunes, SHIELD in its early days. Bumpy starts and clunky dialogue aside, I know others have been disappointed by Marvel’s first female-led movie, but I would happily go and see this one again.