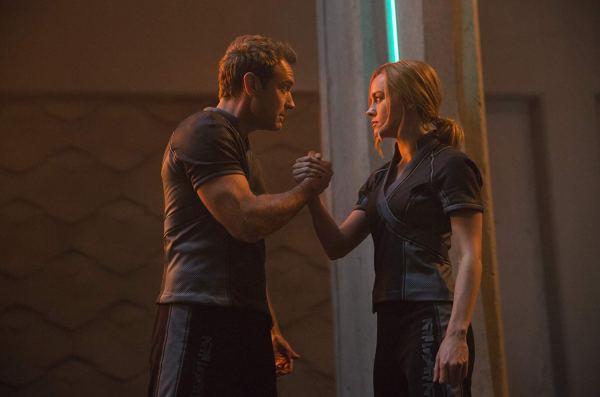 Oh boy, Captain Marvel. You left me enjoyed having watched a decent film, but waiting for the ORIGINAL Captain Marvel film (The Shazam movie, coming out in April) more than wanting to see this again.

This is an interesting film. It’s a film I don’t hate, but don’t feel emotionally compelled towards it. So here we are, talking about my opinions on Captain Marvel. Oh and spoilers are here as well, you have been warned.

Let’s start with the opening, which instead of the Marvel logo showing scenes from all the films, instead shows scenes of ALL of Stan Lee’s cameos in the MCU, before ending with ‘Thank You Stan’. That was such a great opening for me, but that was the most emotional I felt in the film. And yes, Stan Lee has a cameo. And it’s quite meta and funny.

Moving on the main character herself: Captain Marvel, played by Brie Larson. She does a good job acting, which is nice, but sadly I feel Brie Larson’s talent are undermined by the fact Captain Marvel is kind of a boring character. She’s too strong, in my opinion, and yes whilst the MCU has powerful characters like Thor and Hulk, the way they implement them into the films they’re in works. And those two characters mentioned get better with each film, so I’m hoping that’s the same with Captain Marvel, because it would be a waste of Brie Larson’s acting abilities.

As for the supporting cast, it’s all right I guess. The best supporting character is Samuel L Jackson’s Nick Fury, who is very funny in the film’s buddy cop comedy section. Which doesn’t last very long until it’s replaced by another thing, but I’ll get to plotting later. I know people hate when Hollywood uses CGI or de-aging techniques for films, but I liked the de-aging used for Samuel L Jackson. He’s not the badass we’ve seen. Captain Marvel is the first superhero he meets and it’s alright to show naivety. Scratch that, the cat is the best character. It’s a great comic relief and really funny how the two interact. Oh and the cat makes Nick Fury lose an eye. Told you there were spoilers. The other good supporting character is Lashana Lynch’s Maria Rambeau. She’s an interesting character and her relationship with Captain Marvel/Carol Danvers is nice. If she turned out to be gay, I would be fine. Representation is very important nowadays and it would be nice to show it instead of SAYING THAT A CHARACTER IS SOMETHING WITHOUT SHOWING IT (I’m looking at you Solo: A Star Wars Story)

The problems with the film are weird. The visual effects are pretty bland, especially from Marvel movies that have had amazing visual effects. There wasn’t really any exciting action scenes, except for the one towards the end when Captain Marvel uses her powers for the first time. However, the biggest problem for me is the story. At first, it’s Ben Mendelsohn who’s meant to be the bad guy, and honestly I would be fine with that. In this movie, he is a compelling character who I like, similar to how I like him as Nolan Sorrento in Ready Player One. But no, instead we get a twist villain. Because Disney sure realised that their track record with these characters needed a redemption. So instead, Jude Law turns out to be the villain. Considering Disney owns 20th Century Fox, I’m now expecting Jude Law’s Dumbledore to be evil in the next Fantastic Beasts (joking). The problem isn’t the twist, it’s surprising and interesting, but it’s that the character himself has no motivations about being evil, other than being in a war with the opposing species. And yeah, Jude Law’s character might be the worst villain since Malekirth in the MCU. Yeah, I’m serious.

Before I finish I want to quickly compare this to two other groundbreaking films: Black Panther and Wonder Woman. For Black Panther, it’s because there is a GoFundMe page to get girls to see Captain Marvel, similar to how there was a GoFundMe page to get black people to see Black Panther. The problem is whilst this film is important and will have a cultural impact, it’s not as good as Black Panther. For Wonder Woman, that was a much better film because it didn’t need to show scenes of men treating women like nothing like this film did sometimes. It wanted to be a great film, and it did, and that’s why it’s the best film in the DCEU. Captain Marvel feels like it’s in the bottom half.

As I watched, I noticed despite being a female superhero film, there were very few women or girls at the cinema. This isn’t a complaint, I’m just pointing something out. I’m not detracting anyone from seeing this film. If you want to, go ahead. If a girl gets inspired from this film, that’s great. I’m not here to be an arse. I’m just here to say, whilst a good film, Captain Marvel is one of the weaker MCU films and certainly not as great as Wonder Woman.