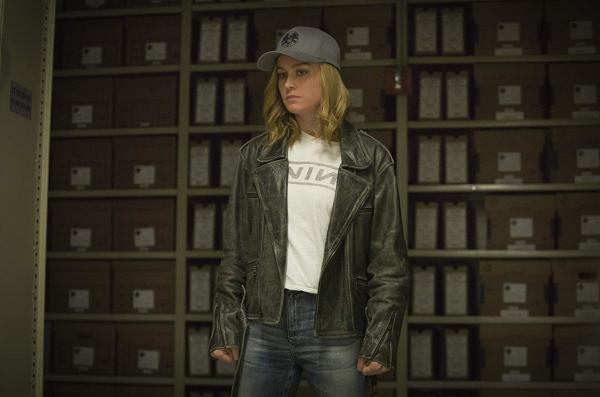 The latest instalment added to the Marvel Cinematic Universe library, showcases Marvel’s response to the successful DC female empowering superhero film Wonder Woman. Captain Marvel tells the story of Vers, a female being associated with the Kree empire, an alien race whose planet is far, far away from planet C53 (Earth). Her memories have been wiped due to an unknown event in her past, and as the film progresses, Vers tries to find out who her true self really is. Set in the 90’s, Captain Marvel will answer questions needed in order to watch the next MCU film (Avengers: Endgame).

Overall, the film was O.K., which in terms of MCU films is not great. Various humorous scenes and a couple of fight sequences (particularly the train scene emphasised in trailers) kept us briefly on our toes, but everything else was so bland. The most disappointing aspect were the visuals. Set in the 90’s, this film should have oozed a lava field of happy nostalgia. Images of Fresh Prince of Bel Air, shell-suits, Spice Girls, 90’s R&B/Hip-Hop first spring to mind, things abundant with whacky, bright colours. Instead, the style was overly grey, dark and dull, optimised towards the end where action scenes were so dark and edited so badly, it was difficult to see what was really going on. Apart from the Blockbusters store and a humorous computer download scene, not a lot of the visuals were reminiscent of the 90’s most of us remember.

Brie Larson wasn’t exactly a rainbow of joy. A good actress, but someone who lacked fun, spunk, and great on-screen charm compared to other Marvel characters we’ve come to love. The depth of the film’s message was to inspire girls (and boys) to keep trying, to keep getting up no matter how many times you fall down. A good message, but with Brie Larson being the messenger, dilutes and forces it onto audiences, as opposed to a message being connoted in affective semiotics.

Audiences will unashamedly compare this lone female Marvel superhero to DC’s Wonder Woman, and it may be unfair to say, but Captain Marvel is no Wonder Woman. Audiences will be waiting for that heroic, uplifting moment that would make them love Captain Marvel, like when Wonder Woman crossed ‘No Man’s Land’ in order to save the village, but no such event occurs. The storyline itself was fine, but more depth and back story from both the protagonists and antagonists is needed to make us more emotionally attached. Perhaps more history into Captain Marvel’s forgotten past (like who her father was, whether she had any siblings, any past loves) would have helped us feel more connected to the character, but the lack of backstory (maybe due to the storyline itself where she has forgotten her Earth past) brought a lacklustre of any sentiment or emotion we would have had for her.

It wasn’t all bad. Samuel L. Jackson gave another great performance as Nick Fury. The CGI to make Samuel look almost 30 years younger was incredible, and we find out how Fury lost an eye, which audiences will either love or hate (I personally loved it). Admittedly, the unconventional pairing and chemistry between Brie and Samuel was quite warm, fun and endearing, but it just wasn’t enough to save this film from being such a blah MCU film. The film just felt like a quick simple filler to help explain why Captain Marvel hadn’t appeared in previous MCU films, and it also probably didn’t help that there were two directors, Anna Boden and Ryan Fleck. It would have been better to let Anna Boden (the FEMALE director) take the full rein of Marvel’s first FEMALE superhero film, as Patty Jenkins did for DC’s Wonder Woman.

How I would rate this film within the realms of MCU, it stands between the really bad first two Thor movies, and the average MCU films such as Dr. Strange and Spider-Man: Homecoming. Optimism to end on, is that if you stay to watch the post-credit scenes, what is really intriguing and exciting to see is how Captain Marvel, the most powerful superhero character we have seen thus far, will interact with the rest of the Avengers, as the contrast between Captain Marvel and the others is so drastically different, similar to the anticipation we had to what the interaction would be like between Dr. Strange and Iron Man, and Guardians of the Galaxy and Thor.