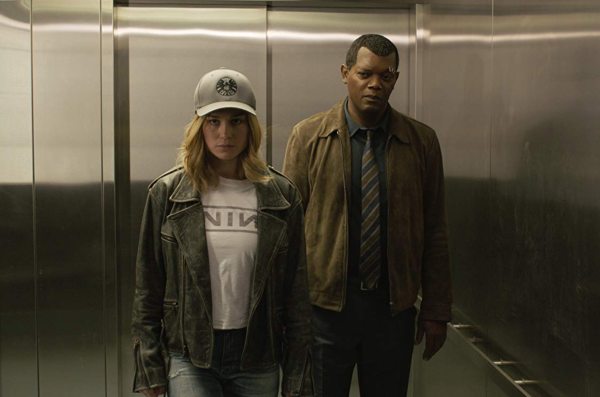 The 21st installment of the MCU (Marvel Cinematic Universe) has arrived on Planet C-53… er… Earth.  This intermittent chapter between the mega crossovers of Avengers: Infinity War and Avengers: Endgame takes us back to the 90’s to set-up Marvel’s most powerful superhero yet; and its first female-led franchise.

The ‘Blockbuster’ opens up with Captain Vers (Brie Larson is portraying the title character Carol Danvers without any memories of her past) training with her mentor played by Jude Law, and a brief introduction to the rest of their Kree team, Starforce.  The team is sent on a mission, which is vital to the efforts of the Kree/Skrull War, which is an inter-galactic rivalry between two alien species. Carol is captured and separated from her crew and is forced to use her powerful abilities to escape, crash-landing onto Earth (or C-53, the Terran homeworld) into a familiar popular video store.

On the run from the Skrulls, Larson’s Danvers is determined to uncover her past while putting a stop to the Skrulls plans on Earth with the help of a young Nick Fury (Samuel L. Jackson) and even an early appearance from SHIELD Agent Phil Coulson (Clark Gregg).  The Skrulls’ leader, Talos (a show-stealing performance from Ben Mendelsohn), is a cunning antagonist that drives the narrative forward as Captain Marvel attempts to solve the puzzles of this war and of her human past.  Both Lashana Lynch (playing Carol’s best friend Maria Rambeau) and Akira Akbar (portraying 11-year old Monica Rambeau who *FUTURE SPOILER ALERT* actually gets powers of her own in Marvel Comics) give incredible performances as family figures that shed light on the humanity of this story, essentially giving the audience a reason to root for the title hero.

This is a 90’s buddy cop meets sci-fi adventure movie, and does not fall short on either front.  There are many characters which may not get the screen-time that they deserve, such as Annette Bening’s character who is introduced as a role model for Captain Marvel.  The de-aging techniques which have been applied to actors such as Samuel L. Jackson and Clark Gregg are near-perfect, and the action sequences and CGI effects are executed beautifully.  Captain Marvel is somewhat of a period piece that is not your traditional origin story which places the protagonist Carol Danvers on a journey to discover her true self.

All of the qualities from the MCU that you have come to enjoy (action, humor, heart etc.) are evident in this set-up movie for Marvel’s heavy-hitter, Captain Marvel.  Anybody interested in Avengers: Endgame, the culminating chapter of a decade-spanning 22 film franchise is not going to want to miss out on this light-show, as it will most certainly be a contributing factor to the over-all finale and for whatever comes next within the MCU.  Brie Larson will return, and she gets a great introduction with this movie.

All I can say, if you don’t know by now with these Marvel properties, stay behind while the credits are rolling, you won’t want to miss a peep!