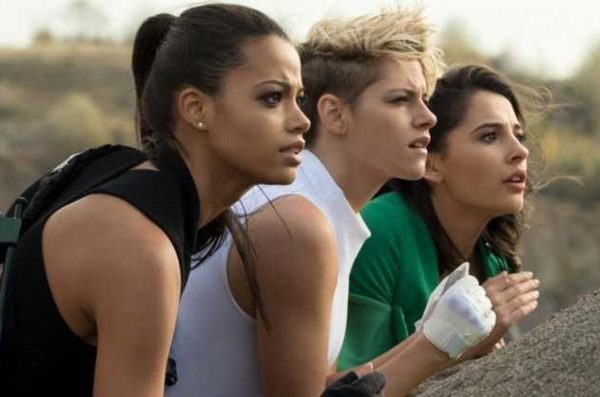 Action comedy reboot directed and written by Elizabeth Banks. The story follows Charlie’s Angels, who work for the mysterious Charles Townsend, whose security and investigative agency has expanded internationally. With the world’s smartest, bravest, and most highly trained women all over the globe, there are now teams of Angels guided by multiple Bosleys taking on the toughest jobs everywhere. When a systems engineer, Elena Houghlin (Naomi Scott), blows the whistle on a dangerous technology, Charlie’s Angels, Sabina Wilson (Kristen Stewart) and Jane Kano (Ella Balinska), are called into action, putting their lives on the line to protect us all.

Sabina Wilson: I think women can do anything.
Man: Just because they can, it doesn’t mean they should.
Sabina Wilson: They have so many talents.

Man: Who are you?
Sabina Wilson: I’m just a decoy.

Stan Bosley: You are in the presence of Angels.

Sam Bosley: You have a new client.
Sabina Wilson: Who is she?

Elena Houghlin: I can’t sleep at night. I’m a lead programmer on a product that can revolutionize the power industry. But there is a possibility it can be weaponized.
Sam Bosley: Elena, we need to go. Now!
[Jane hits the guy that was about to attack Elena]

[answers the phone]
Elena Houghlin: Hello?
Stan Bosley: You’re in great danger. Get out of there now!

Elena Houghlin: Who are you?
Susan Bosley: I’m Bosley.

Susan Bosley: Welcome to the Townsend Agency. We exist because traditional law enforcement can’t keep up.

Susan Bosley: I run a covert group of exceptional women. We work outside the rules, in secret, together. You may now not know, we exist, but we are always watching.

Susan Bosley: So you want to train to be an Angel?
Elena Houghlin: Hell, yeah. Give me my wings.

Elena Houghlin: Oh, God. What did you to Sven?
Jane Kano: I compressed his carotid and deoxygenated his brainstem.
Elena Houghlin: Well, that sounds painful.
Sabina Wilson: Don’t worry, he’s going to wake up.
Jane Kano: Unless he doesn’t.

Susan Bosley: Let’s get the weapon before it becomes every bad guy favorite new toy.

[referring to Elena]
Susan Bosley: Take her to the closet, gear her up. We’re going to need some wigs, toys, clothes.

[as she enters the weapons closet]
Elena Houghlin: Oh, my God.

[referring to the weapons closet]
Elena Houghlin: So I can just take whatever I want?
Jane Kano: Borrow.
Sabina Wilson: Is that an actual rule?

[inside the weapons closet]
Elena Houghlin: Oh, mints.
[she picks up a box of mints]
The Saint: Let’s just stop the touching. Some of these blows up.

[referring to Elena beating up a bad guy]
Sabina Wilson: How did that feel? Because it looked like it felt, really good.
Elena Houghlin: It felt nice.

Susan Bosley: And the day drinking, that’s what I like the most.

What do you think of Charlie’s Angels quotes? Let us know what you think in the comments below as we’d love to know.