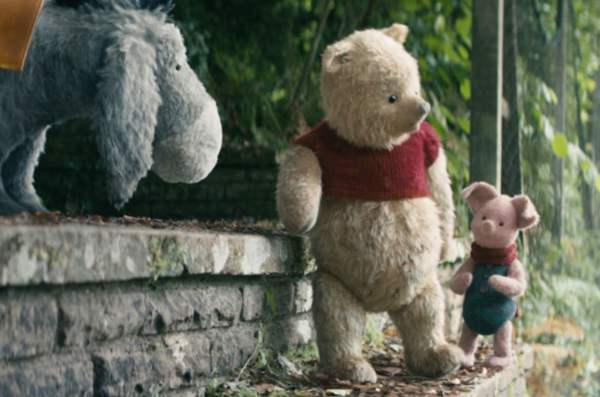 As of 2018, Winnie the Pooh still remains to be one of the most lucrative film franchises owned by the infamous ‘Mouse House’, with the original movie debuting in 1977, the loveable saga has since spawned several straight-to-DVD releases, TV shows, Shorts and even two more theatrical adaptations, Winnie the Pooh (dir. Stephen J. Anderson & Don Hall, 2011) and the recent live-action film Christopher Robin (dir. Marc Foster). As a child, I never really grew up with the original 1977 classic, but instead with a small straight-to-video film called Winnie the Pooh’s Most Grand Adventure (dir. Karl Geurs, 1997). Since its release, this miniscule movie has become a cult classic among die-hard Pooh fans, who now appreciate it for its much darker themes and quality.

The essential plot of the film concerns Pooh and his friends searching for Christopher Robin after he has seemingly disappeared. Of course everything is rectified by the movie’s conclusion and yet the film still boldly asks a question that I believe many of us, until recently, were still too scared to ask. What happens to Pooh and his animal pals when there is no Christopher Robin to give them purpose? Well as of 2018 this question has been answered, as Christopher Robin presents a fully-realised world where this very event takes place.

The film begins with a scene of a young Christopher and his friends celebrating his last day within the magical world of the Hundred Acre Wood, a scene that I would argue, could even give the opening of Pixar’s Up (dir. Pete Docter, 2009) a run for its emotional money. As the scene has Christopher saying goodbye to his cuddly friends one by one, until he no longer has a reason to remain within the fantastical land of his imagination. The scene is beautifully shot, capturing both the child-like wonder of the original Disney cartoons as well as the upset of having to let your childhood go. Pooh silently watching his best friend disappear back into the world of reality is enough to bring a tear to the eye of everyone in the audience, even this cynical reviewer found himself having to search for a tissue in the recesses of his backpack.

Beginning on such a powerful moment, it’s almost a shame that the following 20-30 minutes of the film remain to be the dullest of the entire movie. As we are treated to a stagnant montage of Christopher Robin’s life, from his time at boarding school to the birth of his daughter, Madeline. Of course the montage also serves as evidence of Christopher’s decline from an adventurous young boy to an over-worked and war-torn young man (played by Ewan McGregor), struggling with far more demons than he cares to let on. It is in this segment of the movie that you will not be blamed for letting out a yawn or two, as it does put the quality of the opening sequence into perspective. But as I have already stated, this expositional pause does not last for very long and soon the audience is pulled back into the world of Pooh; who wakes up one day to discover that his friends have gone missing. In his moment of need, Pooh finds himself transported to the urban jungle of 1940’s London, where he is eventually re-united with his best friend.

The following sequence of the adult Christopher returning to the Hundred Acre Wood is probably the best part of the movie, as it charmingly captures the overriding theme of the film; that life is short and you must enjoy every bit of it while you can. Returning to the place of his childhood fantasies, Christopher begins to remember how much fun life can be, especially when it is not dominated by the constraints of adult society. After finding his friends and returning them to Pooh, he returns to London with a new sense of hope in his heart.

Being another entry in Disney’s new live-action canon, Christopher Robin does not exhibit the ornate grandeur of Beauty and the Beast (dir. Bill Condon, 2017) and nor does it encapsulate the epic world-building of A Wrinkle in Time (dir. Ava DuVernay, 2018). Instead it is a small film; a simple film, one that finely executes its primary job without any issue or convolution. In the leading role, Ewan McGregor is mesmerising, especially during those scenes where his toothy grin practically lights up the entire screen. Supporting cast members such as Haley Atwell and Mark Gatiss also give strong performances, with Gatiss giving a perfectly malicious performance as the film’s primary villain.

In terms of visual style and direction, the film does not boast the usual Disney vibrancy that is exhibited on the film’s poster. Instead the colour palette is dull and lifeless, only growing more and more lively as the film progresses, symbolically mirroring the development of Christopher’s character. Forster also does fall into the habit of cutting a significant scene with a random shot of some English countryside, which I am willing to forgive as it does convey the whimsy of the subject matter.

But of course the primary recognition should be given to the silly old bear himself, as Pooh really does steal the film in every way. From his introduction, the little yellow bear delivers charming one-liner after charming one-liner, giving the audience plenty to admire and laugh about. Jim Cummings conveys his dialogue beautifully, and from the moment your hear his soft Pooh bear whisper, you are immediately pulled into a land of childhood nostalgia, making you wish that you had a magical forest in your back garden as well Although I believe some credit should also be given to Brad Garrett for his portrayal of the ever-depressed Eeyore, who also steals some quality scene time with his dry and cynical humour.

However, I must say that if you are going into this film expecting to spend some quality time with Rabbit, Owl, Kanga and Roo, then I’m afraid you’ll be waiting around for a while. As it is the primary quartet (Pooh, Tigger, Eeyore and Piglet) who are given the most screen time in the movie. I also found the film’s tendency to negatively portray employed parents somewhat grinding, as if having a steady income is somehow a bad thing in the eyes of the Hollywood family film – people need money to live goddamn it!

At its heart, Christopher Robin is a Disney film in common with releases such as Alice in Wonderland (dir. Tim Burton, 2010) and Maleficent (dir. Robert Stromberg, 2014). As it takes a well-known and iconic Disney property and gives it a mature and thought-provoking spin. It is a film that reminds us to treasure the child within us all, and to remember that fun doesn’t end when you decide to grow up.