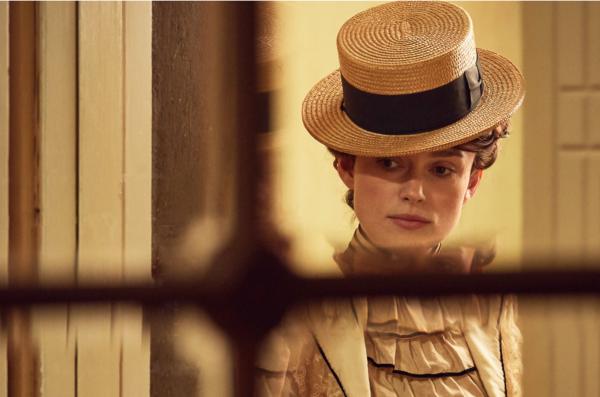 Bio-drama directed and co-written by Wash Westmoreland, which is based on the life of the French novelist Sidonie-Gabrielle Colette (Keira Knightley). Set at the dawn of the modern age, the story follows Colette who after marrying successful Parisian writer, Henry Gauthier-Villars (Dominic West), known commonly as “Willy”, is transplanted from her childhood home in rural France to the intellectual and artistic splendor of Paris.

Soon after, Willy convinces Colette to ghostwrite for him. She pens a semi-autobiographical novel about a witty and brazen country girl named Claudine, sparking a bestseller and a cultural sensation. After its success, Colette and Willy become the talk of Paris and their adventures inspire additional Claudine novels. Colette’s fight over creative ownership and gender roles drives her to overcome societal constraints, revolutionizing literature, fashion and sexual expression.

Count Muffat: Willy married! The wild days are done, eh?
Colette: On the contrary, the wild days have just begun.

[to the turtle with diamonds on its shell]
Colette: You poor thing. You want the earth and the grass, don’t you?

Willy: I have this remarkable idea. Or at least I think it could be.
Veber: Alright, what is it?
Willy: I’m going to launch a novel.
Veber: A novel?
Willy: Yeah, we have stories by Willy. We have music reviews by Willy. Now we have Willy’s first novel. It’ll have enough literature for the highbrows and enough filth for the great unwashed, or vice versa.
Veber: And who’s going to write this novel?
Willy: You are.

[referring to Willy]
Schwob: Are you writing for him too?
Colette: Mm-hmm.
Schwob: He’s made you one of his ghosts already?

Willy: You married a literary entrepreneur. It’s a phenomenal disaster.
Colette: And you’ve married a country girl without a penny to her name.
Willy: We’re doomed, aren’t we?
Colette: It’s perfect.

Colette: Did you ever feel like you were playing a part, Sido?
Sido: In what way?
Colette: As a wife, or a mother. Like you were just going through with it.
Sido: Sometimes, as a wife. Never as a mother. Is he good to you, Gabri? What is it, my love?
Colette: It’s just nothing is how I imagined it.
Sido: Oh. Come here.
[she embraces Colette comfortingly]
Sido: My little kitten. No one can take away who you are. No one. You’re too strong for that. You always have been. Just trust no one but yourself.
Colette: I know.
Sido: So what’s he done to upset you?
Colette: Nothing.
Sido: Nothing. It’s just new, that’s all. I must get used to marriage.
Colette: Better to make marriage get used to you.

Colette: I know who you are, Willy. Maybe I knew it all along. But I want you not to lie to me.
Willy: I won’t. Never again. I promise.
Colette: I want to be part of things. I don’t want to be treated like some little wife at home. I want to know what’s going on.
Willy: You will. You’ll be part of everything.
Colette: Do you promise?
Willy: Promise.

Willy: You could write.
Colette: What?
Willy: Those stories you told me of Saint-Sauveur last year.
Colette: My school stories?
Willy: Yes. That could be Willy’s next novel.

[writing her book]
Colette: My name is Claudine. I live in Montigny. I was born there in 1873. I shall probably not die there.

Willy: Unctuous prick. He was after you.
Colette: He’s not the type, and they just got married.
Willy: Yeah, well, they’re no longer on honeymoon, I assure you, my dear.
Colette: Your jealousy is misplaced.
Willy: How so?
Colette: It was the wife I found interesting.
Willy: Jeanne?
Colette: Yes. What would you think of that?
Willy: Well, that’s a different case.
Colette: It is?
Willy: Perhaps.

Man #2: Willy, your book will change the world!
Willy: Claudine!

Ollendorff: Well, I have to say, Willy, we’ve never had one fly off the shelves like this before. Quite a phenomenon. Everyone’s talking about it. And do you know who’s buying it? Young women.
Willy: Really? I thought that… That’s interesting.
Ollendorff: We’ve also been having inquiries about theatrical rights.
Willy: Any thoughts?
Ollendorff: Of course. The theater’s the next logical step. With as large a stage as possible. It’s the theater-going public who will make you rich, Willy.
Willy: Maybe even as rich as you one day, my dear Ollendorff.

Ollendorff: I believe Willy based Claudine in part on your school days.
Colette: Yes, I think I had a little something to contribute.
Ollendorff: Well, I’m very glad your experiences have borne such wonderful fruit.

Willy: Finally we have a success, and then you imply that I’m not the true author of it.
Colette: No, I didn’t.
Willy: We’re holding dynamite here. We’ve created something really powerful, and if it goes off at the wrong time, then it could blow our bloody heads off.

Willy: I understand the mentality here. You don’t.
Colette: Well, I understand it well enough to write a book that’s the toast of Paris.
Willy: Oh, well, why don’t you… Go and just shout it on the streets then. Tell everybody. Roll up for the massacre.

Colette: And I don’t want to write another Claudine.
Willy: Are you out of your mind? Do you realize how rare this moment is? When people are begging for more? Here, come with me. What would the headmaster do if Claudine had not done her homework?
Colette: Willy, don’t be silly.
Willy: What would he do?
Colette: Make her do lines. Put her over his knee and tan her hide.
Willy: Correct.
Colette: I’ll start tomorrow.
[he locks her in the room]
Colette: Willy.
Willy: Write!
Colette: Willy, let me out!
Willy: You will do as I say. I’ll return in four hours. I expect to see some pages.
Colette: Willy! Willy, come on. This isn’t funny. Willy! Willy, you bastard! You arrogant bastard! Let me out! Willy!
[she pounds on the door]
Colette: Open the door! Let me out!

Willy: Tell me, how many people in this park right now do you think are reading Claudine in Paris?
Colette: I don’t know.
Willy: I’d say at least three-quarters. And the rest of them will soon catch up.

Colette: The hand that holds the pen writes history.

Willy: We’ve got the wind under our wings, and I have a little plan to turn Claudine into the most popular girl in France, if not the entire world. She will literally be a household name.

Missy: But seriously, you’ve done something important. You’ve invented a type.
Colette: Willy has, you mean.
Missy: I mean you have. All those young girls between girlhood and womanhood, you’ve given them a voice. You should own up to it.
Colette: Somebody told you?
Missy: I didn’t need to be told. Meeting you is enough.
Colette: It’s true. I wrote them. It’s just…
Missy: I know.

Colette: I need my name on the book.
Willy: No. Willy is a brand. And, in any case, women writers don’t sell.
Colette: You bastard. You fat, smug, lazy, selfish bastard.
Willy: This is utter nonsense. If you felt so strongly, you should never have agreed to it all.
Colette: Goddamn you, Willy. Without the progenitor, there would be no Claudine.

Willy: Are you going to write today?
Colette: No. Rehearsing with Wague later.
Willy: Well, don’t you think you ought to? I should start locking you up again.
Colette: I would scream the house down.
Willy: Look, it’s a charming hobby, Tetette, but you’re not exactly Sarah Bernhardt. So if you can’t pull it off as high art, you’re going to end up doing the bloody music halls, and that would be scandalous.
Colette: Since when have you considered scandal to be a bad thing?
Willy: That’s true.

Colette: I will continue to pursue this because I want to, and if Paris won’t have me, then so be it. I’ll go elsewhere to make a living.

Willy: Now, please, calm down.
Colette: Why? Why should I calm down? Oh, you hurt and you hurt and you hurt, and you think that by saying “I’m a man, that’s what men do,” you clear it all away. What you did was not just hateful, it was stupid. Now we’ll have no say over our books, and we’ll never make another penny from them.
Willy: We can write some more.
Colette: No, never. Never again. Never!
Willy: You’re overreacting. This was purely a business decision.
Colette: Isn’t that what our whole marriage has been? Wasn’t I the best investment you ever made? No dowry, but my God, she can write for her keep!
Willy: Well, if you were an investment, you were a highly speculative one.
Colette: I paid you back a thousand times.
Willy: Please, just stop it! Just stop talking about money! You were my ideal, my love, my obsession!

Colette: You killed our child, Willy. Those books, they were all we had. And now they’re gone and there’s no chance of repair.
Willy: My darling, Claudine was only…
Colette: Don’t. Don’t tell me what Claudine was. I am the real Claudine. Everything I thought and felt went into those books. They were me. My childhood, my memories, my opinions. Everything. And when I think of the hours I spent alone, slaving away for you, churning out scenes just to try and please you, I am so ashamed of myself for that. And yet I knew, and you knew, that I was bound to do it. You found me when I knew nothing. You molded me to your own designs, to your desires. And you thought that I could never break free. Well, you’re wrong. Claudine is dead now. She’s gone. You betrayed her. And I, I have outgrown her.
Willy: Oh, please. Please, I, I was so, I was stupid. I, I panicked. I… Please forgive me.
Colette: Goodbye, Willy.


[referring to Colette’s writing]
Willy: Would you do me a favor, Héon? Will you destroy these, please?
Paul Héon: Are you sure?
Willy: Definitely. Burn them. Incinerate them.

[last lines]
Colette: [voice over] After two years of music hall and theater, I’m still the same, face to face with that painted mentor who gazes at me from the other side of the looking glass, with deep-set eyes under lids smeared with purplish greasepaint. I know she is going to speak to me. She is going to say, “Is that you there all alone under that ceiling, booming and vibrating under the feet of the dancers? Why are you there all alone? And why not somewhere else?” Yes, this is the dangerous, lucid hour. Now, whenever I despair, I no longer expect my end, but some bit of luck, some commonplace little miracle which, like a glittering link, will mend again the necklace of my days.

[written quote before credits]
“In her old age, Colette remarked, “What a wonderful life I’ve had. I only wish I’d realized it sooner.

What do you think of Colette quotes? Let us know what you think in the comments below as we’d love to know.