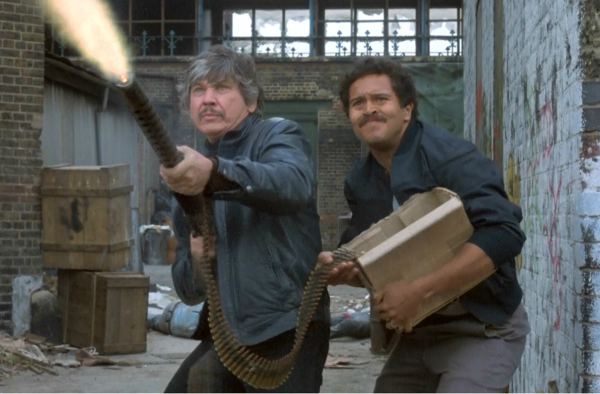 Having already decimated numerous thugs and degenerates across two Death Wish movies, Charles Bronson yet again returns to his vigilante ways, as the city crime rate has now increased to seemingly cosmic proportions.

Our old pal Paul Kersey (Bronson) returns to his old stomping ground in New York City, to visit an old friend he served with during the Korean War. Charley (Francis Drake) lives in a dilapidated tenement building, situated in a dangerous, run-down area overrun by violent criminals, and he and his tenants are always under constant attack. Before Kersey can even get off the bus, Charley is assaulted and killed by members of a particularly vicious gang, run by the menacing Fraker (Gavan O’Herlihy).

Turning up at the scene at the wrong time, Kersey is arrested for the crime, but is recognised by police chief Richard Shriker (Ed Lauter), who remembers his unique, crime-fighting ways from several years before. Giving his suspect an ultimatum, Shriker forces Kersey to once more don his vigilante hat, and secretly help his precinct defeat Fraker and his cronies, who have turned the surrounding neighbourhood into a living hell. Teaming up with fellow tenant and war vet Bennett (Martin Balsam), Kersey is soon only too happy to take out the trash. While this is all going on, he still manages to start a romance with local public defender Kathryn Davis (Deborah Raffin).

If Death Wish II jettisoned any attempt to look at what is a serious, ongoing problem, then Death Wish 3 abandons reality altogether. Whatever themes author Brian Garfield thoughtfully explored in his 1972 novel, and even the partial efforts made by the 1974 movie adaptation, have been completely discarded here, and in its place is something more akin to those Italian post-apocalyptic movies that frequented Drive-Ins during the early 1980’s, such as 1990: The Bronx Warriors and 2019: After The Fall of New York. This makes the second film look like a measured documentary by comparison.

In fact, the more the film goes on, the more entertaining it becomes, but not necessarily in the way the film-makers intended. While the first half is your standard gang/revenge tale, the second half throws caution to the wind, indulging in increasingly elaborate action that would make Mad Max proud. Numerous extras are blown away (or up), entire buildings are demolished, and at the centre of it all is someone who you have to remember used to be an everyday, mild-mannered architect. All this mayhem has to be seen to be believed, and the extensive destruction was surprisingly well-funded by Cannon Group producers Menahem Golan and Yoram Globus, who forked out $10 million ($1.5 million of which went to Bronson), which was quite a budget for this kind of film at the time. If only some kind of style and flair could bring it all to exciting life.

Witnessing Bronson, almost in his mid-60’s by this stage, dispatching dozens of young punks with a variety of weapons, does offer fans a certain amount of fun, probably reaching its pinnacle when the legendary star uses an anti-tank machine gun to mow down any villain that crosses his path. Fellow tough guy Lauter (The Longest Yard, French Connection II, Breakheart Pass) is fine as Shriker, the late Raffin (God Told Me To, Scanners II) has little to do as Kathryn, O’Herlihy looks intimidating in a Brian Thompson way as Fraker, while old pro Balsam (The Taking of Pelham 123) does what is needed as Kersey’s likeable sidekick.

Like the previous entries, familiar faces dot the landscape in smaller roles; Alex Winter (of Bill & Ted fame) and Ricco Ross (Private Frost from Aliens) play gang members; while one of the harassed tenants is played by Marina Sirtis, who would go on to play Counselor Deanna Troi in the long-running TV series Star Trek: The Next Generation.

Director Winner, who helmed the first two movies, goes for broke, and his all-or-nothing approach crosses the line into parody. It’s hard to believe this is the same person who oversaw the original.

Death Wish 3 offers mild entertainment, but only if you see it as an overblown, unintentional comedy. Technicians and stunt people can be commended for their efforts, and its veteran cast members keeps your viewpoint on the right side of forgiving, but this is a series which has undoubtedly strayed wildly from its intended path, and not for the better.