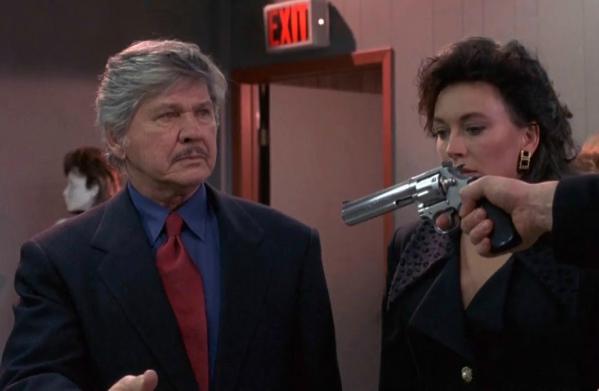 Keeping the streets safe right to the very end, Charles Bronson returns for the last time as Paul Kersey in Death Wish V: The Face of Death, which quite incredibly would be his final theatrical feature.

Like Parts One and Three, the action takes place in New York, where Kersey (Bronson) has once again found love, this time with fashion designer Olivia Regent (Lesley-Anne Down), who runs her own clothing company. Attending Olivia’s latest show, along with her daughter Chelsea (Erica Lancaster), Kersey quickly confronts the business woman’s ex-husband, gangster Tommy O’Shea (Michael Parks), who has crashed the party with his two main henchman, brothers Sal and Chuck Paconi (Chuck Shamata and Kevin Lund).

Tommy is using Olivia’s company as a front for his shady ventures, but with sales not as good as they once were, he is ready to put the squeeze on both his ex-wife and her staff. When the situation turns violent, and Olivia makes the decision to testify against the brutal criminal by divulging his illegal endeavours to D.A. Brian Hoyle (Saul Rubinek) and his associate Hector Vasquez (Miguel Sandoval), Tommy threatens her life by hiring cold-hearted hitman Freddie ‘Flakes’ (Robert Joy), in an attempt to silence her for good.

Matters then go from bad to worse, forcing Kersey to pick up a gun and start exterminating this problem one bad guy at a time.

Death Wish V: The Face of Death is embarrassingly inept, made without a hint of style or even a basic ability to construct either story or tension. Writer/director Allan A. Goldstein, whose only other film of semi-note was the appropriately titled Leslie Nielsen comedy 2001: A Space Travesty (2000), never raises the film above direct-to-video dreck, and his screenplay doesn’t even bother making his characters anything more than mobile bowling pins waiting to be knocked over.

For such a low budget production, it managed to snare some above average talent. Rubinek, who had a bit part in the original Death Wish (and had appeared in the Oscar-winning Clint Eastwood western Unforgiven), tries to bring some kind of energy to his standard role, and is at least lucky enough to share most of his scenes with either Bronson or Miguel Sandoval (Nine Lives, Get Shorty, Clear and Present Danger), another reliable supporting actor.

Joy (The Dark Half, Fallen, Land of the Dead) has fun as the flamboyant Freddie, while all Down (The Great Train Robbery, Hanover Street, Rough Cut) has to do is look worried or terrified. Wonderful character actor Parks (whose career was deservedly re-invigorated after being cast in a number of Tarantino films, such as From Dusk Till Dawn and Kill Bill Vol. 1 and 2) looks like he is enjoying himself as Tommy, but it is noticeable as the film goes on that he is not taking everything too seriously.

Bronson, nearing his mid-70’s, looks too tired to be chasing screen villains around, and one particular action sequence contains what must be one of the most unconvincing stunt doubles ever seen. The iconic star does what is required, but there is no conviction in his performance, indicating that Bronson knows the series has long passed its expiry date.

Death Wish V: The Face of Death unfortunately brings the series to an inglorious end, helmed by a film-maker who has no interest in injecting the final entry with something poignant or memorable. One just hopes that, even though the sequels were substantially inferior, movie-goers will never forget that the 1974 original was actually a finely crafted, smartly handled movie that deserves its place in cinema history.