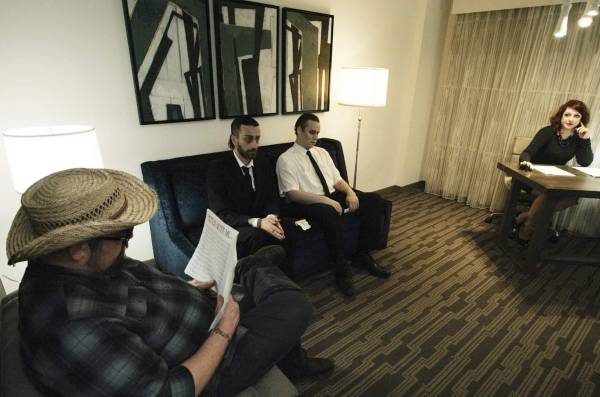 Currently touring the film festival circuit is Department 666, a horror short film written and produced by Dave Harlequin and directed by Adam York. Following quite a bit of success on their last two projects, including numerous awards and distribution on Amazon Prime Video, the North Carolina-based duo of York and Harlequin have returned with their latest offering, and it’s (pardon the pun) a hell of a ride.

Clocking in at roughly 10 minutes, this is certainly their shortest film to date, and quite frankly, also their best. Opening with a very well-done car wreck scene which features some impressive makeup effects and a well-executed otherworldly radio broadcast that pitches viewers directly to a dimly lit waiting room filled with odd characters and eerie music. Upon hearing his number called, Chris Kirkwood (Michael Ray Williams) awakens and is greeted by a rather unfriendly receptionist (Margaret Alice) who informs him that he is in hell and will be sent to work in Department 666. Once in the office, Chris is greeted by the demonically jovial Barry Thomas (longtime indie cinema veteran Patrick G. Keenan) who takes him through an orientation that will no doubt make anyone who has ever worked in an office’s skin crawl from how disgustingly accurate it is. As Chris learns the ropes of his new eternity, he begins to understand the demented and cruel nature of the job and progress from a confused, disoriented everyman into an indignant, pious, combatant, only to be quickly beaten into submission as the layers of darkly comedic horror are peeled back to reveal something more purely horrific.

Worth noting is just how exceptionally well-paced this story is. It progresses through its multiple layers seamlessly through its short 10 minutes, never once overstaying its welcome, and delivering a devilishly fun, dark story while ultimately leaving viewers with plenty to leave to their own imaginations after the end credits roll. The cast is also exceptional, with brilliant multifaceted performances from both Keenan and Williams, as well as a small but strong showing from Alice who nearly steals the show with her deadpan delivery and tremendous screen presence as the receptionist from hell.

From the technical side of things, this film really shines as the best yet from York and Harlequin. Previous films from the duo have noticeably struggled with less-than-stellar sound and questionable editing choices, and this latest effort absolutely addresses and corrects this. Sound is so often the overlooked hero in film, being that when it’s done well, you’ll never notice, but when it’s not it can break an otherwise good film; so the improvement to their sound department between recordist Kevin Murray and composer Neil Lee Griffin should definitely be commended. Furthermore, the cinematography and editing from director of photography Jesse H. Knight is exceptional pairing top-notch camera work with smooth editing throughout.

Overall, Department 666 is an eerie, atmospheric, mini-masterpiece which will no doubt see quite a bit of success on the film festival circuit. It is currently slated for several appearances in its home state of North Carolina, including selections at the Charlotte Film Festival, Wreak Havoc Horror Film Festival, and Horror Movie Freaks Film Festival with the producers promising many more to follow. York and Harlequin continue to emerge as strong new voices in indie horror, and I for one expect much success and many awards for this latest effort.