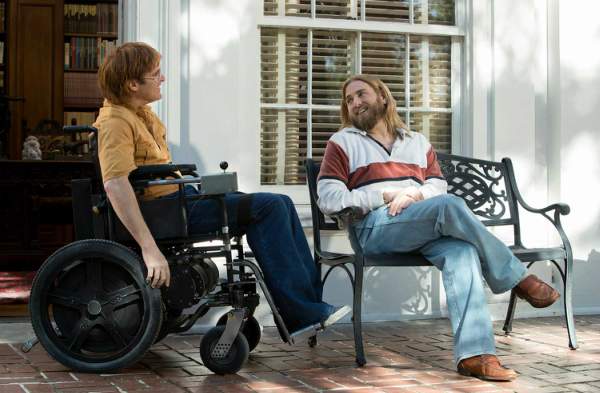 Bio-drama directed and written by Gus Van Sant which centers on John Callahan (Joaquin Phoenix), who has a lust for life, a knack for off-color jokes, and a drinking problem. He nearly loses his life in a car accident and wakes up to the reality of being confined to a wheelchair for the rest of his life. But when he reluctantly enters treatment , with encouragement from his girlfriend (Rooney Mara) and a charismatic sponsor (Jonah Hill), Callahan discovers a gift for drawing edgy, irreverent newspaper cartoons that develop a national following and grant him a new lease on life.

'Maybe you were weakened so you could become strong.' - Donnie (Don’t Worry, He Won’t Get Far on Foot) Click To Tweet

[referring to his drawings]
John Callahan: I draw these for a living, but, you know, people get mad at me because of the subject matter.

John Callahan: My name’s John Callahan, and I don’t know who my real mother is, and I was paralyzed in a car accident. And I’m an alcoholic.
AA Audience: Hi, John.
Donnie: Good to know you, John Callahan, who is an alcoholic. You’re in the right place, I think. I’m Donnie, and I’m an alcoholic.
AA Audience: Hi, Donnie.
Donnie: Hi. And when I first entered the program, I had two pairs of pants, one with shit in them and one without. And I didn’t care which one of them I was wearing. Today, I celebrate mediocrity. I woke up and I put on a non-shitty pair of pants. And I walked to get a cup of coffee, and it was fucking delicious. And my day’s been pretty good, until I came in here and saw all of you.

Annu: How are things going here, John?
John Callahan: It’s bad. It’s really bad. I can’t move. I can’t feel my body, and where I can, it just hurts. I can’t take a whiz or anything. I just feel like I’m going fucking crazy.
Annu: Yeah. Yeah, it doesn’t sound like it’s going too well.
John Callahan: No, it doesn’t. It’s awful. I just don’t even know how I’m going to, like, I don’t know how I can live any life after this. I just feel like I’m not going to have any future. And the doctors don’t tell me anything, but it looks like I’m just gonna be like this for life.

Annu: John, you’re a very special person. I feel it.
John Callahan: I brought you some flowers. I hope you like them.
Annu: Thank you.

John Callahan: I’m glad I met Annu.
Reba: What about us, John? Aren’t you glad you met us?
Donnie: John doesn’t like us.
John Callahan: Well, of course I like you. I just can’t get laid with any of you.
Donnie: Have you tried?
Reba: Well, have you tried?

Reba: What I want to know is, with all the poems that you have, they can’t all be about penises. I mean, you probably got some pretty ones, I’m sure.
Donnie: Well, what I believe is we all have led, in our non-sober periods, somewhat chaotic lives. And I think there’s a very fine line between creating chaos because of the adventure, and creating chaos because of the dependency on it. Now, John isn’t speaking very much, so perhaps he thinks he’s better than us. So, John, do you want to tell us about your drinking?
John Callahan: Oh. Is this… Do I say, “John, I’m an alcoholic?”
Donnie: Just tell us about your drinking.
John Callahan: Well, I, um, I started drinking when I was, uh, thirteen. I stole a bottle of gin from my Aunt Diane, and, um, I liked it, a lot. And I never stopped.
Donnie: Okay.
John Callahan: Um, yeah.
Donnie: Keep going.
John Callahan: I mean, I kept drinking, I guess, maybe because I was adopted. I was adopted. And, um, maybe it made me not care as much about that. Or… Yeah. I don’t, I don’t really know.

[to the two people walking past him]
John Callahan: Hey, some fellow artists. Check this out. Look at this. No, I’m not trying to sell you anything. I just want you to look at…
[the people quickly walk off]
John Callahan: They published my cartoon, you fuckers!

Donnie: Maybe you were weakened so you could become strong, Callahan. You ever think of it like that? The path to enlightenment is to know yourself.
John Callahan: How do I know myself?
Donnie: Forget yourself.

John Callahan: I kind of thought that my group story would end with an epiphany. Like, you know, I’d break down and cry, and be cured forever. Nope. No, I don’t feel that different now. I don’t, I don’t feel like I had the big moment.
Donnie: This is the big moment. There’s no lightning bolt that shoots you and cures all your shit. There are discoveries and epiphanies and moments of clarity. But this doesn’t just go away. You have to wrestle with this shit every day. Some of that pain will remain there forever. Some of that shame will remain there forever. But you have to fight with it, or you’ll fucking die.

John Callahan: Being a model to the world eternal virtue will be yours, and you return to the boundless. Lao-Tzu. Chuck E. Cheese.

Donnie: I think I’m still a little selfish. I was helping you guys a lot, because it was helping me. My twelveth step, being a sponsor. You were such a pain in the ass, John.
John Callahan: I’m sorry. You’re the best, Donnie. You really helped me. You helped all of us.
Donnie: It is hard teaching people faith.


What do you think of the quotes? Let us know in the comments below as we’d love to know.