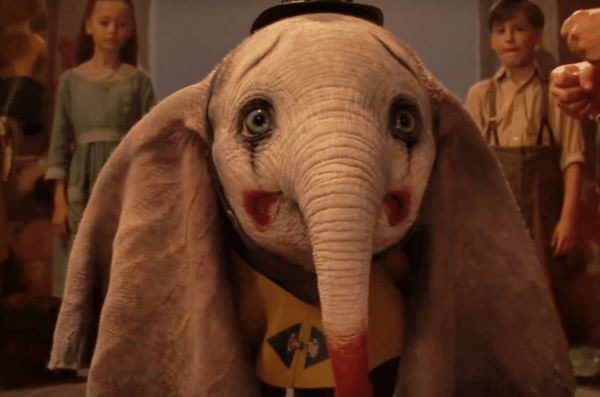 Dumbo Flies Higher Than Your Expectations!

Dumbo (2019) is a fresh live-action take on a Disney animated classic from 1941. Like most of the early films from Walt Disney, Dumbo had some dark undertones that are more easily swept under the rug in an animated film for kids.

Those same dark story beats are present in the live-action remake, but the film is more sad and depressing despite its colourful cinematography (it is a Tim Burton film after all).

Emotions aside, this film is entertaining and has a thumping heartbeat. An interesting world is introduced as you see the ugly innards of a dying circus age, not quite sure of what to make of its inhabitants. None of its characters seem to be inherently lovable, aside from the two Farrier kids Milly (Nico Parker) and Joe (Finley Hobbins) – who befriend little Dumbo – and not to forget Dumbo himself!

Great performances are given by Colin Farrell (Holt Farrier), Danny DeVito (Max Medici), Michael Keaton (V.A. Vandevere), and Eva Green (Colette Marchant), but not until the story unfolds do you start to see redeemable qualities from some of these characters. Dumbo is a misfit elephant who goes on a journey to discover himself and become reunited with his Mother; and in doing so takes a bleak and rundown circus community and revitalizes it, breathes new life into it, and inspires others to do better. It is as if the studio and the writer/director (Disney, Ehren Kruger, and Tim Burton respectively) are very aware of the outdated aspects of this classic tale and the social responsibility that comes with tackling this retelling in 2019.

Colin Farrell plays the lead (human lead, anyways), a war vet named Holt Farrier who has returned from battle (having lost an arm while at war) to his circus family. It is clear that the circus, much like Holt himself, is not what it once was, having lost many members to influenza (including Holt’s own wife, mother to his two kids Milly and Joe). Max Medici (DeVito) is barely holding it together when Holt returns, but he is placing his hopes in the basket of a newly acquired Asian elephant who is pregnant.

Dumbo is born and instantly adds insult to injury as Max cries out, a victim of circumstance, blaming Dumbo for being born with larger-than-life ears. The show must go on, however, and the burden is placed on the Farrier family collectively to figure out how to work little Dumbo into the act while hiding his over-sized ears from the public. One of the standout roles from the circus troupe is Rongo (played by DeObia Oparei), right hand man to Max and Jack-of-all-trades (out of necessity due to the camp’s dwindling numbers), acting as the circus’ strong-man, drummer, and accountant to name a few.

Calamity ensues, as naturally Dumbo’s irregular features are exposed and his Mother comes to his defense when an angry crowd is ridiculing poor Dumbo for his differences. The production comes crashing down and the Mother is labelled ‘Mad Elephant’ as a casualty of the accident is carried off by the coroners. Dumbo’s Mom is then sold and carried away from the circus.

Unbeknownst to the ‘adults’, Dumbo’s big ears allow him to fly, which is a spectacle that would surely be the leading act of the show if it were exploited. The children are aware of Dumbo’s gifts, and once Max realizes the opportunity he puts Dumbo in the limelight. Word travels fast and the flying elephant act catches the attention of Mr. Vandevere (Keaton), proprietor of the most successful circus known as Dreamland. He purchases the entire troupe from Max under promise of circus glory, and invites everyone to come and stay on his impressive estate. The imagery of the children arriving to Dreamland via parade is eerily similar to a child getting to experience a Disney theme park.

V.A. Vandevere has designs for the Dumbo act and wishes to push (literally) his prized Colette Marchant (Eva Green) into flying atop a Dumbo who is already unsure of his abilities, needing a feather in his trunk to actually fly. Colette’s loyalty is a question mark, but the Farrier family must work with her and Dumbo if they are to pull off a successful show. The kids strike a deal with Dumbo that if they make enough money from the circus they will try and use it to free his Mother.

Although the final act of this classic re-imagining has a familiar action sequence involving heroes vs. villains, it is a well-told story which does have positive messages poking through the tent-holes of Tim Burton’s circus. Intriguingly bold choice of the film-makers to tell a story of a big bad circus exploiting ‘Dreamland’, bearing a striking resemblance to the studio’s own perceived monopoly over nostalgia. There is a certain fearlessness maintained by committing to an outdated story and attempting to right certain wrongs or at least shine some light on its shortcomings.  There’s a memorable scene from the original involving pink elephants that didn’t quite carry over, but I’m sure even the creative minds behind this version of Dumbo had to draw the line somewhere when it came to dark and depressing subject matter.

Overall, 2019’s live-action Dumbo is an entertaining hero’s journey that finds its way to a happy ending. Burton’s vision is present but not over-powering as it easily could have been, given the subject matter. There is a morality tale weaved into this weird circus world of the 1940’s as well as lots of family adventure. As far as Disney live-action remakes go, “Let’s Get Ready for Dumbooo!”