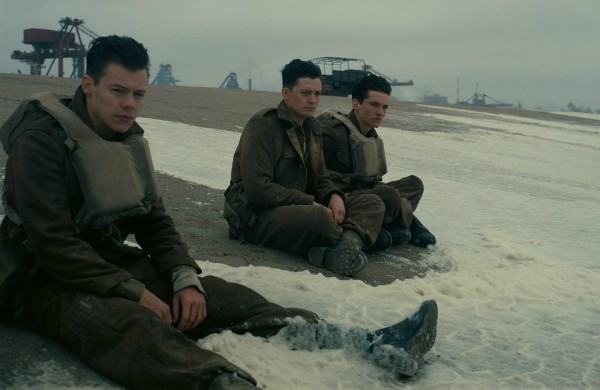 The Showcase of Survival

As I left the theater from seeing the movie Dunkirk, I came to the realization that I had no idea who the main character was. What he stood for, where he came from or even his own name. In fact, I knew very few of any of the characters in this movie. Of course that was for a reason Christopher Nolan planned out from the beginning. There’s a reason why this movie has very few scenes of dialogue, because it’s not important. This is a type of movie that doesn’t need to tell you a lot in expositional conversations, mostly because it’s simple to understand. The Germans have closed in on the British and French during the second World War and have pushed them near the ocean.

They now have to do anything they can to survive and their best bet is to make it across the English Channel with several destinations that are only about an hour from where they are retreating. However, with Germans quickly closing in, the lack of planes for their defense and morals quickly dropping, all seems hopeless. This movie shows (spoilers) how they were able to succeed and make it to the title location. And of course let me just say that is done beautifully. if Christopher Nolan wasn’t a director he should’ve been a historian. Everything in this movie is an accurate depiction of what it’s like being in that war.

There’s no Hollywood explosions or an obscene amount of blood with limbs flying off. The dog fights in which planes from either side go head to head is the best example of this. As each pilot tries to outdo each other for survival we don’t see the flash of gunfire from the planes or balls of flame when the aircraft crashes into the sea. We hear it, then see the subtle smoke arise from the plane. To me this makes or breaks a serious movie, having unneeded explosions would change its tone and Christopher Nolan knows this. He’s been here before and doesn’t mess around.

Since there’s not a lot of character dialogue in this film, the acting sticks out more and in Dunkirk it does just that. The cast in itself has its no shortage of stars, with names such as Tom Hardy, Cillian Murphy, Mark Rylance and Kenneth Branagh. Trust me, those names alone are enough to make a great movie but what really stood out to me where the two new actors that stole the screen.

Fionn Whitehead who plays Tommy our main character does a fantastic job of showing us how he feels. He has his first conversation nearly halfway through the movie so his outlook on the situation is what we mostly get out of him. His mannerisms and emotions are his selling point and he nails it.

What really got the people buzzing was that Harry Styles was going to be playing a big role in the movie. Styles who is known more for his singing ability in the big hit band “One Direction” than his acting turned some heads the other way. Since this was his first big movie I was skeptical but I’ll admit that he proved me wrong. He played Alex a companion of Tommy’s as they both do their best to survive. Styles has energy, compassion and showcases his frustration very well in not seeing any chance of living.

Overall Nolan does it again in creating an absolute gem of a movie. A sure to be blockbuster and a great war movie for years to come.