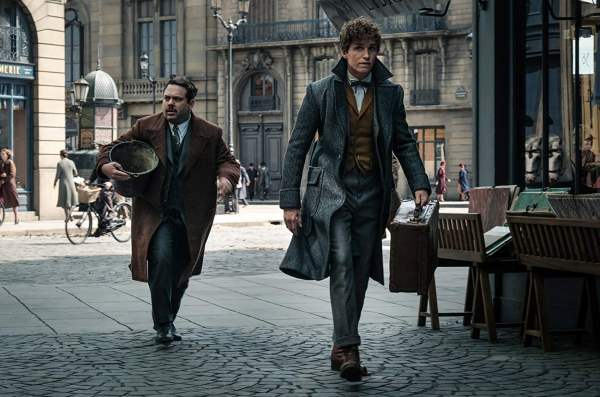 Well, that’s it. Yesterday I finally got the chance to watch Fantastic Beasts: The Crimes of Grindelwald. I half expected a disappointing movie, as I had liked the first one ever more than the Potter series. Reading reviews on the Internet, I got the feeling that a little injustice is being made towards Fantastic Beasts: The Crimes of Grindelwald. First of all, it is the second movie of a series of five. In Fantastic Beasts And Where To Find Them, the basis for a new story had been set. It is clear that this new film aims to develop many threads that are going to be further explained in the future. I agree that the plot sometimes does not match with what we already know from the Potter books and Pottermore, but there is no mistake that can’t be fixed. Even things that seem absurd might have a not-so-absurd explanation.

There is so much action and so many threads that I am a bit worried about whether the next movies are going to be able to explain everything properly, without making up stuff that does not match with what we know (also because we actually know quite a lot, especially about some characters). Still, in the Potter books and movies many unexplained things are clarified only in the last “episode”, eventually. I think (and hope) that everything will become much clearer as the series goes on. Therefore, criticizing the lack of explanations in this movie is definitely unfair. J. K. Rowling so far has always proved to be able to develop and explain things properly. For now, we can do nothing but rely on her once more, confident that she’ll not let us down. Visually speaking, the movie is a true masterpiece.

Visual effects are just great and Coleen Atwood definitely deserves that Academy Award she won for Fantastic Beasts And Where To Find Them: the costumes are so beautiful and realistic. The soundtrack is very good as well. The true strength of the movie, still, is the acting. I am not a huge fan of Johnny Depp but I must admit that his performance as Grindelwald is stunning. He is simply perfect for the role: there is a scene which clearly shows how a great actor needs nothing but his voice and gestures to ensnare the audience. Jude Law proved to be the perfect young Dumbledore, as he was capable to play the role with respect and yet to add that inner hidden pain and straight talking that are present but softened in the Potter saga, perhaps as a consequence of ageing. Concerning Newt Scamander, here comes the actor who, in my opinion, is the true flagship of the series: Eddie Redmayne.

Once again, this young man has given a masterful and impressive rendition of a character not so easy to portray. Newt, as seen in the first movie, is not the typical hero. He is not the chosen one. He is socially awkward and gentle. He is overly shy and lonely. He just has a huge heart and, as said in this movie, he never met a monster he couldn’t love. Eddie Redmayne here portrays a man who has gained a bit of self-confidence (he is not as timid and twitchy as in Fantastic Beasts And Where To Find Them) and yet is overwhelmed by insecurities, mainly regarding his love for Tina. There is a bit of Newt Scamander in each and every one of us, and this is what makes him a great character, whose evolution is going to be very interesting to witness.

For once, we have a hero that is not stereotypically strong, clever and brave, but kind, caring and selfless. This is the only thing that I’m going to criticize: we didn’t see much psychological analysis of the main characters in the Potter series. Now, in Fantastic Beasts there are such interesting personalities (not only Newt, but also Tina, Grindelwald, Theseus and Dumbledore himself!) and backstories that it would be a pity if they were not deeply analyzed and developed under this respect. I’m not saying that psychological analysis is absent in this movie, but it is more superficial and less important than in the first one. I really hope that we’ll see a bit more of it in the future.

Fantastic Beasts: The Crimes of Grindelwald is, taking everything into account, a great movie that can either evolve into something even greater or begin to fall apart into a pathetic seek for coups de théâtre. As I said, I trust J. K. Rowling and therefore have the feeling that this is only the beginning of an epic climax. For now, we can only watch Fantastic Beasts: The Crimes of Grindelwald over and over again, trying to figure out if we missed something that could help us understand where the plot is going. It’s going to be a long two-year wait.