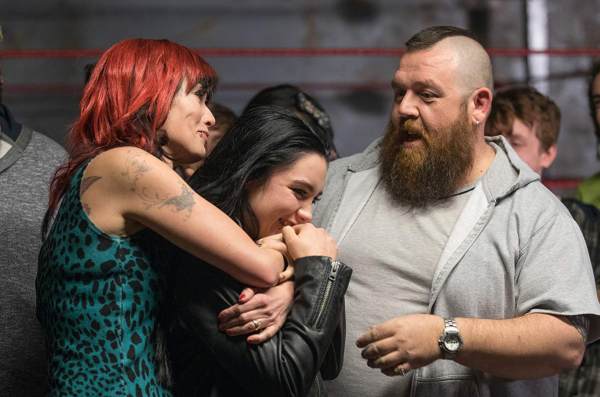 Fighting with My Family is a new biopic, based off of the documentary The Wrestlers: Fighting with My Family, about former WWE Superstar Paige and her rambunctious wrestling family. The film stars Florence Pugh, Nick Frost, Lena Headey, Jack Lowden, Vince Vaughn, and Dwayne “The Rock” Johnson. The film is written and directed by Stephen Merchant, in his first solo-outing as a film director, and the film was also produced by Dwayne Johnson.

The story takes place in Norwich, England where Paige (Hugh) and her brother Zack (Lowden) are working for their family’s wrestling company, as they are attempting to receive a tryout with the WWE. During a family dinner they receive a phone call from the WWE, inviting Paige and her brother to the tryout. At the end of the tryout, the coach (Vaughn) reveals only Paige is invited to Florida to continue her training with the WWE. From there on, the film shows the struggle Paige experiences trying to make it to the WWE’s main roster.

This film features a ton of great performances, but Florence Pugh was by far the best. Her performance of Paige of incredible and shows that she could soon be an A-List actor. Nick Frost and Lena Headey also do a great job as usual, this time performing as Paige’s parents. Vince Vaughn seems to be making a comeback after this role and his role in Brawl in Cell Block 99. The biggest surprise of the film though is Jack Lowden as Paige’s brother Zack. He gets a terrific performance and shows all of the struggle and embarrassment he felt after not making it into the WWE.

Another surprise for this film is the amount of screen time the other members of the Knight family receive. After watching the trailers, it was expected that this would be a Paige movie, but all of the family members have a major part to play in the film. Florence Pugh and Jack Lowden are basically sharing the lead role. It’s a very smart move on Stephen Merchant’s part making the family be more than just background pieces. It shows the affect Paige’s opportunity has on the Knight family.

There only a few issues with this film, one of which is the flow of the film. There’s a few sections that drag quite a bit. Also, it feels like there should have been a little bit more of her career in the WWE, rather than just setting it up for a sequel. The last issue that I wish they showed more of her childhood and showing how Paige gained her love for wrestling. Other than that, there’s nearly no problems with Fighting with My Family.

Overall, I enjoyed Fighting with My Family quite a bit and may be a movie I rewatch in the theater a couple more times. My favorite part about this film is that they marketed it towards everyone. This is not a film just for wrestling fans, anyone can enjoy this movie. If you plan on seeing a movie in the next few weeks this would be my first recommendation.