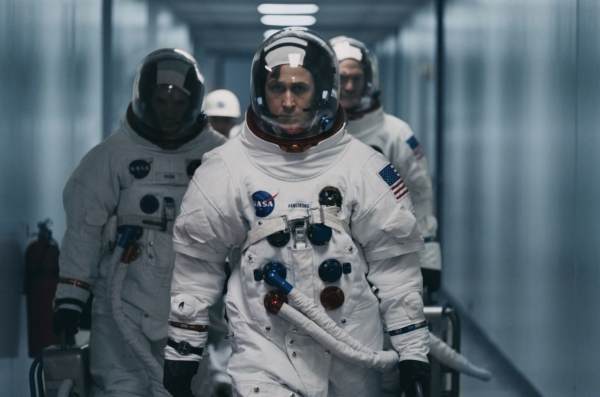 This is Chazelle’s first movie where music isn’t an ongoing theme and this is part of why my expectations were lowered, my fault not his. The fact is that I was searching for Chazelle’s marks from the previous ones while watching the movie. I even though about his fast whip camera movement and how he was going to fit in this one. Now I really think I shouldn’t have done that. It killed the movie to me since it’s not a musical or something but an entirely different movie. Mistakes apart. Even in a movie where music is not the main currency he manages to present his love for it in small details such as a short dance scene and also through the score.

Another top thing about the movie is its homage to 2001: A Space Odyssey, the docking scene is a beautiful scene with a beautiful piece of music that resembles The Beautiful Blue Danube by Johann Strauss. Other top marks in the film are Chazelle’s decision to make the launch scene entirely from inside the pod something that creates a sense of ongoing danger and claustrophobia. The opening scene is also a great scene for it sets perfectly the theme of the entire movie. The movie is declared as a biopic but it’s really about how we deal with loss. The introduction of the movie is much like Up from Disney, only more realistic; first it shows us the achievement.

The protagonist peak of what possibly is a new and beautiful thing. Then it shows us the loss. The death of the dearest thing for a parent, his child. This is the things that will follow Armstrong for the rest of the movie and how the two relate it’s the key to Armstrong’s proceedings. The more he loses somebody the more he gets glimpses of what can be something unique. Whenever a loss happens an achievement happens after. The differential here is that the loss is more present than the achievement, Chazelle’s focus on loss and how affects Armstrong at the edge of something great.

The movie shows us the journey to the moon–a great achievement–as just a trip to anywhere for there’s no moon however great that fills the empty space left by a daughter in a father’s heart. All the beauty the world has to offer us, a beautiful sunset or an adrift in the atmosphere all alone, being above the clouds or far on the moon with all eyes on you, those are small things when there’s a void surrounding our personal lives left by someone who might never come back. We are not in a bubble totally safe, we are in a closed shaft with limitations and very low vantage point.

It’s interesting how the movie climaxes though, for the trip we think was going to be the longest is actually the shortest. The trip we think they all had more to lose they all win at the end. This doesn’t mean their problems is over forever just that their over at that time, but it ends with the hope that even though we lose things we can achieve other things that may be even greater, they’ll never replace old important things but they’ll have their own importance for us and maybe for the world.