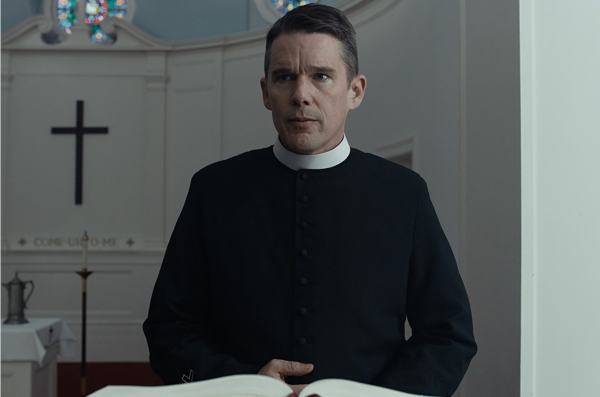 Paul Schrader’s latest film First Reformed filmed in 4:3 aspect ratio, is sharp and poignant as it is touching and warming. Following the journey of a minister of a small church that once helped folks crossing the Underground Railroad, we get to the core of our very existence on a micro and macro level. As audiences, we get lost inside the church just as much as the Reverend, but boy is it worth it.

The film proposes a case for the church’s role in the modern era, given the ‘political’ climate, literally. What is the church’s role in protecting the Earth- that which is deemed ‘god’s creation’? Surveys increasingly show a decline in numbers of adults identifying as “Christian” across every demographic group. Some argue that church leaders bear some of that responsibility for lacking connection with the youth. We see this in various scenes in the film, a general disconnect despite any effort and best intentions. So how exactly do we get the youth interested in the church? The film not only proposes some sort of solution but does so by presenting the disconnection within the church, highlighted with the bleak and industrial waste surroundings. This revelation seems obvious, but it is not cut and dry as it may seem.

Perhaps it’s the 4:3 aspect ratio and long, static takes that not only gives the film a vintage, timeless feel, but we also feel the isolated, lonely moments of Reverend Ernst Toller (Ethan Hawke) just like we feel for Mary (Amanda Seyfried), a pregnant parishioner and her longing for love. Mary seeks Reverend Toller’s spiritual assistance with her environmentalist husband Michael who is afflicted with Mary’s pregnancy, not wishing to bring a child into this world. The problem is, Michael is not spiritual and he cannot be convinced through the Church.

Meanwhile, the Reverend prepares for the 250th year anniversary with the help of its parent and megachurch, Abundant Life. Reverend Toller’s church does not have the glamor, the congregation size, or resources of Abundant Life, but that is not the source of his trouble. Reverend Toller is at a spiritual crossroad, troubled by his past, carrying guilt, and quite frankly the weight of the world. Ethan Hawke is believable, we feel bound to him and follow him slowly through his physical and mental anguish. In many ways we sympathize already. We want to do more. We can do so much more.

Wires, weeds, and broken tombstones decorate the space that the Reverend spends most of his time, it is a sad representation of his aging and tiny congregation. His home is also empty – short of visitors, and life. The Reverend and his mood grow darker and darker as the 250th anniversary event approaches. The film offers no relief until the very end, but it is not short of pure American cinema at its finest. Contrasting colors, shocking ending, discordant moments and sounds.

We feel the Reverend’s dread. We dread existence. We dread the future. The film stops short of answers, leaving us with many questions. The question throughout “Will God forgive us?” leaves us wondering: who needs forgiveness and is that enough? Change must start somewhere, whether or not God is not listening. The film is daring and haunting, one of the best films of the year.