By Jacob Mello (Austin, TX, US) 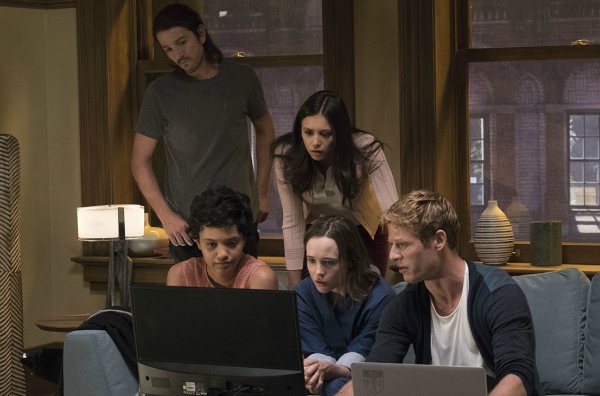 For the uninitiated: after flatlining, evidently, your first order of business is ALWAYS to bang a work colleague. Next step, depending on your background, is to bake bread using an old family recipe (obviously) or show off some other equally meaningless skill that you’re now able to recall. The next step – and here’s the kicker – is to be haunted to death by your biggest regret. Now, none of my coworkers are my type and my grandmas bread recipe sucks, so flatlining doesn’t really seem like it’s for me; but accidents do happen, so just in case my heart accidently stops and starts again, let me just formally make amends here and now for my biggest regret – purchasing a ticket to see this movie.

I was a fan of The OC, so I have a higher tolerance than most for watching preposterously attractive people timing it perfectly so their friends walk in right in time to see them trying to kill themselves/but not really, so I’m giving that concept a pass. What I won’t give a pass to, is that it was set up in the name of science. With brain scanners and the whole deal, and the second one of these prestigiously trained doctors has a bad trip, they throw the baby out with the bathwater and all settle on “what’s happening can’t be explained!” At that point the movie shifts and instead of an interesting sci-fi concept movie, we’re left watching essentially a bad drug/party movie with a basic 12-steps kind of journey gutted out and turned into a B-horror film.

Which brings me to this little declaration: I’m making a ruling. From now on, all PG-13 movies need to be capped at one sex/faux-nude scene per movie. Every neck-up scene after the first one just starts to feel like the equivalent of watching a group of kids screaming at one another to ‘get “F’ed”‘ and to go to H.E.double-hockey-sticks. You’re not pulling one over on anybody, with that move, OK? Either have the balls to show it for real, or have the balls to come up with actual plot points.

For such an interesting concept (Terry Gilliam – 12 Monkeys, The Fisher King – would have crushed this idea) they’ve managed to completely botch and leave out everything intriguing about it for the second time in a row now. I couldn’t understand a portion of Diego Lunas dialogue through his thick accent; and 20 minutes into the movie, I realized that wouldn’t make much of a difference. Otherwise the actors did a fine job with what they had. This movie was made by the writer of Source Code and the Director of The Girl with the Dragon Tattoo so I was hoping for more, but I think we all knew after the first trailer how this one was going to turn out. I think it’s safe to mark this one with a big “DO NOT RESUSCITATE.”