By Jason McBride (Seattle, Washington, US) 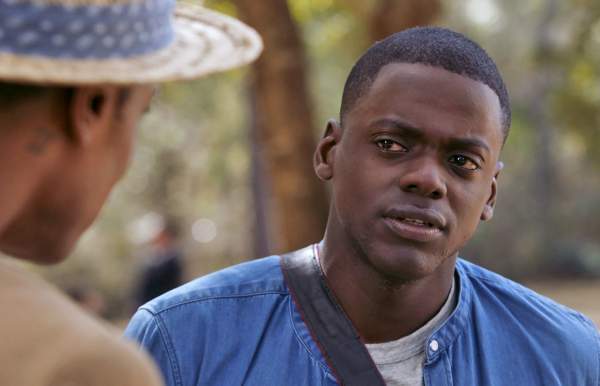 Hype is great for ticket sales, but not so great when it comes to the critics. A big target is an easy target. I watched Get Out after it won the Oscar for Best Original Screenplay, and though I anticipated a well-crafted piece of entertainment, my trapdoor button finger was pretty itchy.

As it turns out, comedian Jordan Peele’s directorial debut is a nice little film. Tightly scripted (by Peele), perfectly cast and culturally adroit, it generally hits all the right notes. It’s a horror film, and any time you go above and beyond in genre, you score some easy bonus points, but in this case Peele, who has a white mother and black father, broke ground by addressing race not just between the shrieks, but as the impetus for the shrieks.

Daniel Kaluuya plays Chris Washington, a black photographer in a relationship with Rose Armitage (Allison Williams), a white, eager-beaver limousine liberal. They take a weekend trip to the country to introduce Chris to Rose’s parents: neurosurgeon Dean (Bradley Whitford) and Missy, a psychiatrist who specializes in hypnosis (Catherine Keener). Things immediately go awry, with Dean making classic old-white-guy racial blunders and her soft-in-the-head brother/UFC fan Jeremy (Caleb Landry Jones) suggesting that, with the right training, Chris’ race would make him “a fucking beast.” Chris, by way of Kaluuya’s subtly knowing looks that say, “I’ve been down this road before,” graciously takes it all in stride until Rose’s mother shanghaies him into a hypnotic trance that catalyzes the inevitable slicing and dicing.

As I said, Get Out goes above and beyond, employing thriller fear as a stand-in for the fears African-Americans experience in the face of institutionalized white power; regardless of race, we all identify with Chris. But even before the lid completely blows (is cut?) off, we get all the cringe-worthy comments from wealthy white people, culminating in the classic dick size query. It gets a little boilerplate, which is why Jeremy’s “beast” statement is so powerful; it addresses racist eugenicist beliefs that still trickle into the popular discourse, but with more Peele’s personal flair. As the film progresses, the racism becomes so overt that it slips into cookie cutter satire that wouldn’t even make the cut for Peele’s sketch comedy. But it’s a tricky balance—too much nuance could gum up the firing of the horror engine.

I suspect horror buffs aren’t blown away by Get Out. In terms of mechanics, it doesn’t do anything to push the genre forward. It’s no Shining; if anything, it goes toward camp. The production values of an operating room scene look like those of MAD TV or The Kids in the Hall, and when Chris flees the clutches of his captors, it all seems too easy and ends too quickly. There’s not much payoff for the buildup. Comedian LilRel Howery makes an admirable attempt to supply comic relief as Chris’ buddy Rod, a TSA agent with a heart of gold, but while Howery is likable, the whole thing is just medium funny and underdeveloped. Peele should have gone full camp, with better gags, or incorporated another layer into the main plot.

I suspect what people will discuss for years to come are Peele’s ideas about race, which are pretty damning when fully teased out. It’s not just about brick-and-mortar slavery; Western Europeans and white Americans “live” through people of African (and Latin American and Asian) descent because our identities, which are partially built on leisure and cultural expression, wouldn’t be possible without cheap labor and social advantage. The mainstream has deflected any potential guilt by repeating the mantra that black people did this to themselves; we filter everything through these narratives, so when Colin Kaepernick takes a knee during the national anthem, we see insolence, because we’ve already constructed a narrative of black insolence. In other words, we don’t see Colin Kaepernick, but our own preconceived ideas. Like Peele’s remote-controlled automatons, black people have been stuffed into the sunken place, their voices choked by history. While Get Out isn’t a horror masterpiece, it exposes that history with an airtight premise that cannot be ignored.