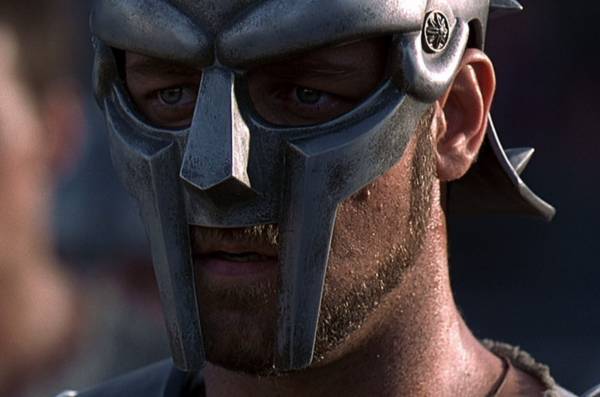 Gladiator is directed by Ridley Scott and stars Russel Crowe, Joaquin Phoenix, Connie Nielsen, Spencer Treat Clarke, Richard Griffiths, Derek Jacobi and Oliver Reed. It is a film about a Roman general who is disgraced by his Emperor and forced to become a slave, and later becoming one of the most badass gladiators ever, until he gets the chance to finally take his revenge on the man who turned on him. This is one of my favourite movies, and the reason for that is because it has one of the most epic directorial styles I have ever seen in a movie.

There are very few films that are truly perfectly directed in my opinion, and Gladiator is one of them. From the opening battle sequence, to the even subtler, quieter scenes of dialogue between the characters, this film has one of the most captivating first acts in a movie. The Battle of Germania is a riveting sequence with fantastic stunt work, choreography and editing, and of course Hans Zimmer’s spectacular score makes it wonderful to watch. One of the most commendable aspects of the film is the way it balances the incredible action sequences with the truly interesting, meaningful and character-building dialogue sequences where we learn more about the situation, which is actually really hard to do in a movie, especially in an action movie. One could argue that each action sequence builds on the other, and there are so many ways in which they portray the brutality, extravagance or sophistication of the Roman Empire, which resonates throughout the movie.

I hate drawing comparisons, but I genuinely believe that this is the best performance that Russel Crowe has ever given. He makes Maximus one of the most relatable, interesting and entertaining characters possible, simply by giving a truly human performance throughout the movie. Every situation that Maximus finds himself in, Crowe sells every second of his screen presence and every word that comes out of this guy’s mouth. I believe that the most important necessity about Maximus’s character is that he is relatable in every way, otherwise this movie would not have come out the same way, which is why I give Crowe major props for how he helmed the lead role in this movie. Also, while not the most important parts but still a necessity for the film to be enjoyable, I completely bought Russel Crowe as the badass war hero who kicks ass like no one’s business, and since Crowe inhabits almost every single action sequence in this movie that makes the necessity of being a believable warrior even more important.

There is such a thing as having a perfect three-act structure, and that’s what this movie helms almost as good as Casino Royale – the first act depicts Maximus being the renowned Roman general with a heart of gold and how he ends up losing everything that matters to him, the second act is about how he becomes a gladiator, and the third act is about the intense battle of titans between Maximus and Emperor Commodus, played wonderfully well by Joaquin Phoenix, in which Commodus constantly battles for Rome’s respect, which always seems to go straight to Maximus. That being said, I think that one of the most impressive things about Commodus’s character, apart from the magnificent way in which Phoenix plays him, is the fact that he’s completely relatable, even though this man goes through one really disturbing character transformation and becomes a sociopath supreme.

The differences between Maximus and Commodus is one of the most intriguing parts of the film, and it’s established from the very beginning of the film – Maximus heroically leads the Roman army into battle and defeats the enemy, and Commodus shows up late for the war itself and you can tell that it impacts on him more than any other character present, because Commodus ought to have been the one winning the wars for his father, played by the late great Richard Griffiths. As the film progresses, and both men go through these transformations, their differences become even more complex, the thing that remains prevalent throughout the movie is the fact that you understand where they’re coming from. From the dot, you can understand that Commodus wants what is always afforded to Maximus, which includes the adoration of his sister Lucilla (Played by Connie Nielsen), the respect of the Roman army, and the love of his father, which is perhaps one of the most complex aspects of the character, and it actually shows us what makes a great villain for a movie like this.

This film’s scope is truly phenomenal, everything from the direction, to the camerawork, to the cinematography, to the musical score, which includes “Now We Are Free”, one of my favourite musical numbers of all time. The way this movie creates such a scope that sucks you into the story is truly commendable, because there is nothing about this film that is contained or enclosed – even when Maximus is fighting for his life in the arena, you can tell that there’s much more than just a fight to the death happening, there’s either a battle for Rome’s soul, or a game of kings being played between Commodus and Maximus, or the moments that come up when Maximus actually has the chance to take his revenge but is held back by something that doesn’t seem like a plot device or a convenient part of the script. The way the film progresses from Germania, to the gladiator arenas in North Africa where Maximus is trained by the great Oliver Reed (may he rest in peace), to the Colosseum where Maximus becomes the kickass man of the people, is something that I’m always impressed by and something that makes the movie even more epic.

The script of this movie is also something that I’m blown away by, because it ranges from being about family drama, to being about personal glory, to being some of the most intense, captivating monologues ever put on film, to scenes where nobody says anything but there is so much going on (especially in scenes where Russel Crowe doesn’t say anything, but his body language tells you so much). I could list almost every major line of dialogue in this movie as my favourite, but I’m going to say that Oliver Reed’s big speech about winning the hearts of the people in the arena, Commodus’s heartbreaking monologue to his father about how he can never live up to the man’s expectations, to Commodus’s speech later on trying to provoke Maximus into a fight, to Maximus’s truly phenomenal speech which has become one of my favourite monologues of all time, so much that I will give it the honour of typing it out – “My name is Maximus Decimus Meridius, commander of the Armies of the North, General of the Felix Legions, loyal servant to the true emperor Marcus Aurelius, father to a murdered son, husband to a murdered wife, and I will have my vengeance in this life or the next.” (p.s. I just had chills typing this stuff down!)

The final act of this movie is some of the most intense, compelling stuff I’ve ever seen in a historical movie. From the scene with Commodus giving the “Am I not merciful” speech to his sister, to the attempted coup against Commodus, to the amazing confrontation scene between Commodus and Maximus where Commodus challenges Maximus to fight him to the death in the arena, to the thrilling final showdown between Maximus and his mortal enemy, which is awesome. Even though the final duel is a sword fight, not a $100 million battle sequence, is made up for by the fact that there are such grand stakes behind it, because Commodus has stabbed Maximus prematurely and Maximus is now fighting within an inch of his life. In spite of this, Commodus finds himself unable to beat Maximus, even when his opponent has dropped his sword and is about to die; when Commodus is finally killed, what stands out really well is the fact that everything seems completely peaceful, as if the death of Commodus has brought peace to Rome, but nevertheless Maximus dies and Lucilla encourages him to seek out his family in Elysium. The final scene in the movie, where Juba, played by Djimon Hounsou, buries the figurines of Maximus’ dead wife and son in the spot where he died and promises to see Maximus again, is just beautiful filmmaking.

The flaws with the movie: None! This movie is one of the best movies ever made in my opinion, easily my favourite epic movie of all time, and Russel Crowe and Joaquin Phoenix gives the performances of their careers. If you haven’t seen Gladiator, then I recommend it hugely, because I promise you you’ll have a good time.