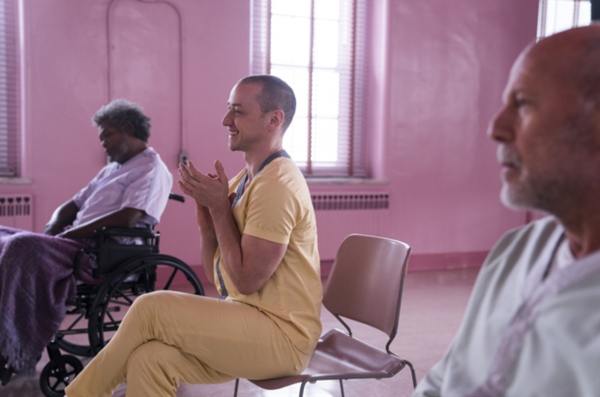 Night Shyamalan’s newest film Glass is the sequel to Unbreakable and Split, concluding the Eastrail 177 trilogy. The film stars Bruce Willis, Samuel L. Jackson, and James McAvoy. Glass takes place three weeks after the events of Split. The Horde (McAvoy) is on the loose and has kidnapped four more girls. Meanwhile, David Dunn (Willis) is trying to find The Horde and save the four girls. Dunn soon discovers The Horde’s location and confronts The Horde. The two begin to fight and are soon arrested and taken to a psychiatric hospital, where they later meet Elijah Price (Jackson).

The acting in the film is the best part of the film. Bruce Willis seemed like he cared about his role for the first-time since Looper. When he finally becomes a part of the film Samuel L. Jackson was also great. But the main star of the show and the reason to go see this film is James McAvoy. He plays 23 different characters all with their own personalities, accents, and mindsets. The way he just slipped from character to character was just amazing and made my jaw drop. Fan favorites Hedwig, Dennis, Patricia, and The Beast all make a return to the spotlight in this film. I just can’t get over the fact of how amazing James McAvoy was in this film. He performed and Oscar-worthy performance.

I thought the screenwriting was fantastic, and since it is M. Night Shyamalan you never really know what to expect next. The story kept me engaged and on the edge of my seat for the entire film. Shyamalan is one of those writers that when done properly can make a fascinating and immersive story. Glass was also very well directed. You can tell Shyamalan was very patience to have every single scene match his vision for this film. There was only one problem I had with Glass and that is the amount of screen time Bruce Willis received. His performance in every scene was great, but it seemed as if he sidelined for most of the film. Bruce Willis was the star of Unbreakable and with Glass being an Unbreakable sequel it would’ve been nice to see Willis make a much bigger impact to the film.

At the time of writing Glass has a 35% on Rotten Tomatoes, and personally I don’t understand why. I thought acting was well to give it at least a positive grade. I can understand why some critics don’t like Glass, but I feel like they’re being too harsh on Shyamalan. This is one of those films you just have to see for yourself. Glass is not going to be a film for everyone. This film is for fans of the first two entries of the Eastrail Trilogy. If you go into this film with no prior knowledge of the previous films, you will likely become confused with what’s happening and will not enjoy the film as much. But, besides that Glass proved to me that he still has the talent and the storytelling to give fans an amazing experience. Glass will probably end up being of my favorite films of 2019, and for that I believe everyone should go see Glass.