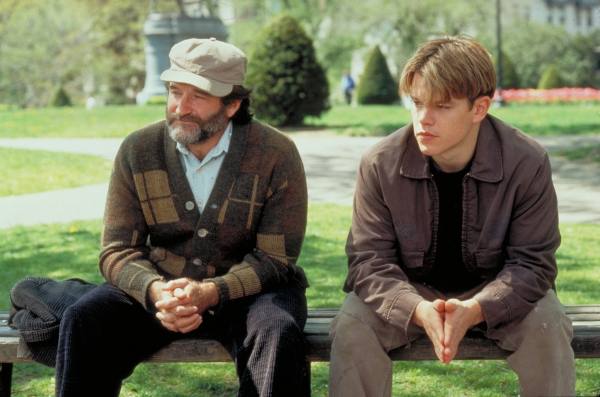 Good Will Hunting, directed by Gus Van Sant. Starring Matt Damon, Robin Williams, Millie Driver, Stellan Skarsgard, and Ben Affleck. Written by Matt Damon and Ben Affleck. The highly regarded professor Gerald Lambeau (Stellan Skarsgard) gives his class a problematic math problem to solve. Knowing the problem to be a huge challenge, the student who answers it correctly will receive an award for it. Later, Will Hunting (Matt Damon), who works as a janitor for the university, solves the problem when no one around to witness it. Soon enough, the professor catches the boy solving another one of his hard-hitting questions on the chalkboard, and believes this boy has the potential for greater things. However, the boy is rebellious and has a repetition of criminal behavior. Making sure Will doesn’t go to jail, it’s obliged for him to get the boy to see a therapist. After numerous failed attempts for Will to cooperate with the therapists, Gerald Lambeau asks his old friend Sean Maguire (Robin Williams), who’s profession is in psychology, to get him through the boy once and for all, considering he and Will both originated from South Boston.

I had a tremendous experience with this film, because this  movie gave me a broader perception of movies and honestly, nothing I had ever seen like it. I was sucked in with the clever writing this film, and the interaction amongst  the characters. At times the film was humorous, and sometimes extremely heartfelt on how these characters psychologically suffer, since they spend most of the time trying to figure out what’s best for them, and for others as well. The film was no doubt realistic with its storytelling and stayed true to what it is, and never tried being something entirely different. It was unpredictable, and the characters in the film gave us a much deeper sense of the film, once you get to know more about them.

First off, the film never dragged on, and for its entire running time, it was filled with scenes that helped us learn more of the characters, and how some of them develop during the course of the film. The film never focused on a character who had nothing to do with the movie, and rather spend it’s time fleshing out the main characters. Furthermore, the performances were brilliantly done from everyone, but for me personally the performance that stood out was Matt Damon. The way his character suffered from a horrific past and somehow couldn’t  seem to move on from it, made it difficult for him to find his true place in life. Plus, the way he depicted his character’s rebellious and arrogant behavior was a joy to watch and sometimes you even felt like smacking him in the face. Second to Matt Damon’s stellar performance would be the late Robin Williams, who some would even argue that his performance in Good Will Hunting was better than Damon’s.

The portrayal of his character was calm, sorrowful and subdued most of the time, but when he had to make an impact in a scene, he did not disappoint. He was also charismatic and comedic which shouldn’t be a surprise at all from Mr. William’s performance. Yet, the element to his performance that stood out for me was his dialogue delivery. He felt natural with every word that came out from his mouth, which shows how well he embodied his character. For instance, there was a scene in the movie in which Robin William talks to Matt Damon’s character on regret which was brilliantly done. The two actors felt natural and dialogue was fun to listen to and thought provoking. There was never a second where I ever stopped listening to these two interacting and going back and forth in every scene they were in. Last but not least, the way the film utilized its location in Boston gave this film a sense of reality, and for us audience members to make us feel it’s realism. The film never concentrated on huge skyscrapers or the well maintained areas. It concentrated a bit on Will’s  life that goes on in the suburbs and the streets in Boston. Other than that, the dramatic score by Danny Elfman was brilliantly composed. It’s definitely one of the best ones I have listened to since it brings a softer and marvelous side to the movie.

Overall, Good Will Hunting was a unique film, and a great experience for me. This movie had a great impact in my life. It helped me analyze films better, and pay close attention to clever dialogue. The director also leaves it to us audience members to come up with theories on why the characters behave a certain way. Good Will Hunting for me gets a 10/10 because of its brilliant performances, dialogue, and most importantly, it’s beautiful characterization. If you haven’t seen Good Will Hunting yet, please do check it out. It has great dialogue, brilliant performances, and is the type of film that challenges you. It’s definitely remembered to this day for being truly remarkable.