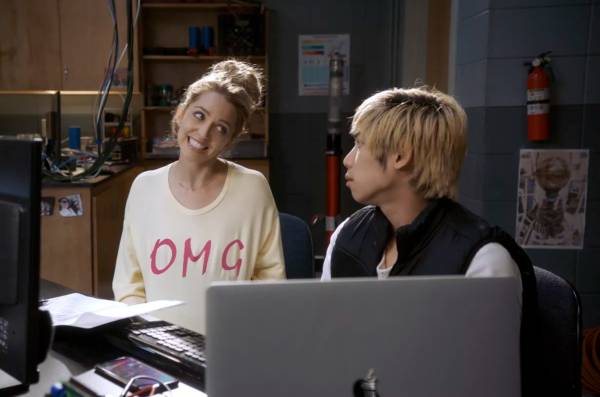 Happy Death Day 2U is a not so perfect mess of dimensional time loop chaos. What do you do when you run out of ideas? You do the same thing over again. That is exactly what is going on in the sequel to Happy Death Day. Audiences can expect to see the same thing they saw 2 years ago and it does not come as a surprise. Director Christopher Landon used the money-making formula from the previous film, with some added twist, so it is not a complete copy and paste. There was still a lot to love with a great mix of comedy, romance, and horror. Most importantly a great performance from the lead actress Jessica Rothe ensured everything held together through the final shot.

When Ryan Phan, whom you may remember from the previous film, as the young man who walks in on Tree and Carter every-morning, becomes trapped in a time-loop of his own, a chain of unfortunate events occurs. Ryan enlists the help of Tree and Carter, who have plenty of experience in dealing with the time-loop problem, to help him out of his mind-bending situation. Along the way, we discover that Ryan’s science project is actually what caused the time loops for Tree and himself to occur. Similar to Trees’ encounter with the time loop, Ryan is faced with death each night until he can figure out a way to stop it, so every moment he has is precious. When the point comes to use the science project to reverse the effects of the time loop, something goes wrong, and Tree finds herself back in her own time loop, this time with a twist. A lot has changed as Tree wakes up in another dimension, similar, but slightly different than her own. She has to race against a killer and the clock, to free herself from her situation, as each time she dies in this loop she wakes up weaker and weaker.

There are so many expected similarities between the first and second film, it was hard not to fall asleep during familiar scenes. A majority of the plot was painfully predictable and rather boring. This is where the film gets its flak, knowing it is supposed to be very similar to the original story, is okay, but there was not much new or exciting content to catch you off guard. As each night would end with the classic stalk the prey horror, I did find myself on the edge of my seat a couple of times. The film did a great job of using the little horror that still remained and it was one of my favorite aspects of the movie. The time loop madness, however predictable, was still fun to see again and had me laughing and feeling sorry for the characters because of the mess they found themselves in.

Conclusion: Happy Death Day 2U is a predictable and a way too similar version of the first film. Cheesy plot lines, to literally watching the same thing over again, had me lulling to sleep. However, a great performance by the lead Actress, silly humor, and time loop craziness made watching this sequel worth the time. How could you possibly go wrong with watching someone die over, and over, and over again? If you were a fan of the first film, I strongly recommend you see this one. If you have not seen the first film you may be wondering, “What the hell is going on?” or, “Wait, what dimension are we in again?” more than once as you watch on.