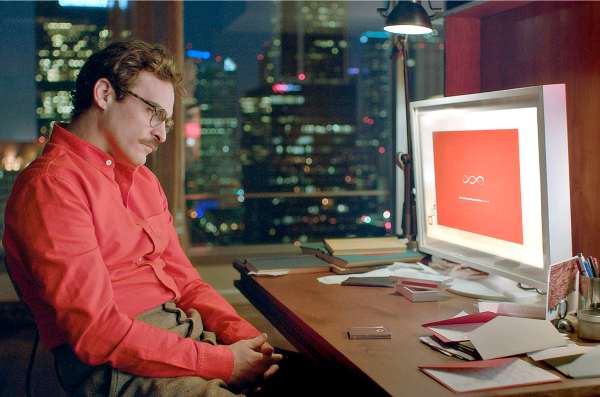 Spike Jonze, although examining the foreign yet familiar Los Angeles future, first and foremost creates a love story that is gutting, sincere, and, in every way, charming.

Her follows Theodore Twombly, played by Joaquin Phoenix, a disillusioned romantic haunted by his separation with his wife, as he finds companionship with an artificially intelligent operating system, Samantha, voiced by Scarlett Johansson. This wave of operating systems soon transcends the constraints of time, driving the ultimate wedge in the unlikely relationship. This split, however, leaves Theodore with a newfound sense of fulfillment and hope as he grows close with his friend Amy and becomes a published author.

Her denounces the pessimistic view of the future by constructing a beautiful blueprint of Los Angeles. Particularly, one shot stands out when Theodore steps out onto his balcony in admiration of the illuminated skyline. The futuristic setting is highly technological. Large, brandless advertisements fill public spaces, while people stay connected to small handhelds and earpieces. The setting points to a world of convenience, but Jonze juxtaposes this utopia with the distraught Theodore. Theodore, in many instances, resorts to instant gratification from technology.

In the first act, he turns to online sex hotlines to fill his sexual desires. He bypasses meaningful connection in favor of an easy release, leading to his eventual disappointment. To add, he spends his time playing a seemingly pointless video game. After his virtual character provides some comic relief, the audience is left wondering at the purpose of the game. Jonze’s illustration of the future, behind the facade of innovation and perfection, is a criticism of modern society. Jonze suggests that we too easily turn to technology and shy away from developing intimacy. Behind our screens, we trade conversation for likes, a form of instant gratification.

In one scene, Theodore implies a distant connection with his mother, showing the destructiveness of pursuing gratification through technology. In another, Theodore struggles through a crowd that was engrossed in conversation with artificial intelligence, hardly glancing away from their handhelds. This overall disconnect is Jonze’s examination of our current society through intelligent world building.

It is the lack of a large ensemble that truly allows Spike Jonze to achieve the intimacy that Her provides. Besides a few supporting foils in the form of Amy and Charles and Paul and Paul’s girlfriend, the audience is left to identify with Theodore and Samantha. The emotional arcs of Theodore and Samantha share a similar path throughout the film. Theodore and an operating system, both seemingly apathetic beings, gain emotional strength and wisdom through friendship. In Theodore’s case, he learns to embrace the human connection through Amy, a platonic friend. He initially rejects human contact after his separation by refusing to socialize or even accept the human surrogate of Samantha.

Best captured by his ex-wife, Katherine tells Theodore, “I feel like you always wanted me to be this light, happy, bouncy, everything’s-fine LA wife, and that’s just not me.”

This emotional hurdle manifests itself when Theodore is confronted with Samantha’s push to have a surrogate. Theodore reacts by refusing, indicating his fear of Samantha’s growing consciousness that he thinks would destroy their idyllic relationship. In other words, he is scared that Samantha may become human and reject him. As an effect, Theodore is forced to relate to Samantha in a way that she isn’t a perfectly crafted match for him. Jonze, to convey this, shows Theodore having flashbacks to Katherine, indicating the parallels that Theodore perceives with his failed relationship with Katherine and the increasingly tumultuous one with Samantha. This conflict sparks Theodore’s moment of growth, where he accepts the need for imperfect relationships.

Concurrently, Theodore grows close to Amy, who also separated with her significant other. Amy represents the foil in this sense, where she handles the separation by not allowing herself to become emotionally destructive through isolation. In contrast, she seeks fulfillment in work, passion in film, and friendship in Theodore. In the second act, Theodore learns the value of companionship from Amy.

“Since Charles left I’ve been really thinking about that part of myself, and I’ve just come to realize that we’re only here briefly, and while I’m here, I want to allow myself joy. So fuck it,” explains Amy to Theodore.

Amy’s use of joy strikes Theodore particularly because his coping mechanisms were riddled with satisfaction and instant gratification, while now he finds joy with Samantha and Amy. This theme is shown through many directorial techniques. For instance, a shallow focus is used when Theodore feels isolated, but it evolves throughout the film to bring the background in focus with Theodore. This parallels the new connections Theodore experiences, as well as a new perspective he gains. Additionally, Samantha and Amy are associated with red, a color of passion and love against the muted setting. So, Spike Jonze relays that love creates joy in both romantic and platonic relationships, a message that ultimately brings merit to the title, Her, A Spike Jonze Love Story.