How to Train Your Dragon: The Hidden World (2019) Movie Review 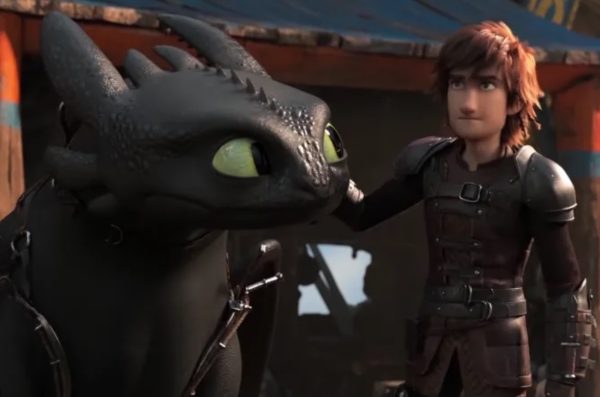 If you are coming here just for the rating, I would rate this movie a 4.5/5!

Let’s be honest here, sequels don’t usually live up to the hype or fame of the predecessor films before it. How to Train Your Dragon 3: The Hidden World has almost all core elements of a How to Train Your Dragon series: dragons, riders, Berk, Hiccup and of course – our favourite and lovable cute little night fury – Toothless. Unlike the first two films, The Hidden World has significantly less action scenes and more emotional (and romantic) moments. The animation is amazing as usual but the story is stifled by a very generic plotline that somehow still manages to lead to a grand conclusion to the series that is How to Train Your Dragon. The concept of introducing a new Light Fury to the equation can be quite interesting in terms of the romantic interactions between Toothless and the former. However, the third instalment brings more to the table than what meets the eye.

Well, before we get to that, let’s talk about my general opinion on the film. It’s great for kids, it’s simple, funny and can appeal to the kids. Toothless is unbelievably adorable and every time he appears on the big screen, people can’t help but let out an “awwww”. Nevertheless, that doesn’t mean this movie doesn’t appeal to the older demographic. It’s still a good watch and can be entertaining to follow through, also providing a grand finale and ending to the 3-part series. There are moments where the stunning animation and visuals take you by surprise and you are simply dazzled by the beautiful scenery of the sunset in the background. You could be immersed in the intense yet calm flight of the mystical dragons, following these mythical creatures through the clouds and above the ocean. The story is basic and you won’t fail to notice the typical villain clichés – “I am going to destroy everything you love!” In short, the animation is fantastic and easy to follow regardless of age, the story is not complex and easy to understand. Many people may think that this movie deserves a rating of 3/5 or 4/5, but I feel that this movie deserves a 4.5/5! Let me explain why.

Despite being a movie directed at kids, there are many forms of symbolism found throughout the movie that can hit home for many adults and teenagers. Obviously, it goes without saying that I will be mentioning scenes or important plot lines in the movie, if you have not watched the movie yet, I would advise you to run off and watch it as quickly as possible! Otherwise…

There is this over-arching theme about letting go. This comes in the form of what the entire movie tries to drive home. From the beginning, the Vikings are shown with their dragons, living in perfect peace and harmony, enjoying life as it is with the dragons. Their first mission is to infiltrate an enemy ship and to save dragons. Despite it being fairly successful, Hiccups’ mother does note that the riders are too dependent on their dragons. This already is a huge contrast in comparison to the first instalment in the franchise where the Vikings and the dragons were at each other’s throats. This sets the foundation of the film – Vikings and dragons can live together. However, progressing towards the end – after discovering the Hidden World – Hiccup realises that Toothless would be better off suited living in the Hidden World. Not just Toothless, every dragon would be more comfortable living in the Hidden World. This is when all the Vikings have to let go of their dragons – the animals who have been living alongside them all this while. Seeing the main cast parting with their significant other-dragon-half made me tear up, having to depart and the thought of no longer being together can be quite saddening.

Before this, all while during the middle of the film, Hiccup and Toothless face a dilemma. After meeting the Light Fury, Toothless is entranced. Toothless wants to be with the Light Fury – it is a night fury’s primal desire to breed life with their own kind (as mentioned in the movie). However, Hiccup did not realise what that meant. Being with Toothless since young has forged such a strong bond between the two partners – they were practically inseparable. Sadly, all good things must come to an end. Realising what Toothless really wanted and needed, Hiccup finally came to his senses and decided to set Toothless free. How so? Without Hiccup, Toothless couldn’t fly due to how his hind wings mechanism works. Therefore, Hiccup came up with an idea to build a new mechanism that allows Toothless to fly on its own; the idea may not have worked in the past but it does now! Toothless can finally chase after the love of his life, going off with the Light Fury into the Hidden World, leaving Hiccup behind. For the record, Hiccup did not consider that as goodbye, he had initially thought that Toothless would return.

Seeing Toothless finally finding someone who he likes is akin to parents realising that their child has inevitably set their eyes on someone. Parents at this point can’t do anything, they cannot prevent love nor can they cut it off entirely. They can only watch helplessly as the child whom they painstakingly raised grow up and pursue a love interest. Unwilling to let their child go, many parents may face depression initially. Unescapably, over time, parents will come to realise that their ‘child’ has finally grown up, they are no longer a child; they are no longer the little boy/girl that they have to look after. This point is especially highlighted when the child finally gets children of their own – in fact, Toothless does make little baby Night and Light Furies nearing the end of the film. Hiccup does reunite with Toothless and sees this, in spite of this, Hiccup feels proud, he feels a sense of accomplishment watching Toothless have a family of his own. He is satisfied for even though they have parted, both of them have managed to survive and grow a family individually. Even though their bond is not broken (albeit Toothless forgetting Hiccup for just a moment), they acknowledged when it was time for them to part and walk their own paths. Even when they are apart, they are never alone.

Besides that, in the scene where Hiccup battles the main antagonist, Hiccup had to save Toothless by putting all his hope in the Light Fury – in hopes that she would catch Toothless. Contrast to when they first met – Hiccup did not want to lose Toothless to the Light Fury; the Light Fury was aggressive towards Hiccup – the two now learnt to understand and accommodate, ending in the Light Fury also saving Hiccup afterwards. However, before the Light Fury manages to catch Hiccup, Hiccup had to fend off the villain. During the scuffle, the night fury hunter was grabbing onto Hiccup’s prosthetic foot – unwilling to let go. After some time, Hiccup finally decides to detach the prosthetic, allowing the villain to fall. This prosthetic has been introduced since the end of the first movie. It was there to replace the limb that Hiccup lost in the final battle against the giant dragon in the first instalment. Since then, it has helped him move with ease (with more ease compared to without having a prosthetic) and is basically a reminder of that very incident – his first battle alongside Toothless. Likewise, with Toothless, the prosthetic has been following Hiccup throughout all 3 films, and similarly to Toothless, Hiccup too has to learn to let go. The prosthetic can represent the emotional baggage of all the eventful things that has taken place in his life, him detaching the prosthetic also representing him coming to terms with change – the new Light Fury, letting Toothless go and him being the chief of Berk.

Being able to include so much detail in a short film (less than 2 hours) is quite astounding, though I must admit that the plot is pretty sub-generic and could be improved upon. For example, more emphasis could be placed on the main antagonist’s motives and motivations. The discovery of the Hidden World did not feel as satisfying as it probably should have been and the movie can feel rushed at some points. Nevertheless, the movie was quite well done.

To sum it all up, this movie is quite a rollercoaster ride, there are fun and exciting moments, but there are also emotional junctures which leave you sobbing and crying for more Toothless. Despite all this, the movie is good and encompasses important lessons to viewers of all ages – to accept change and learning to let go.