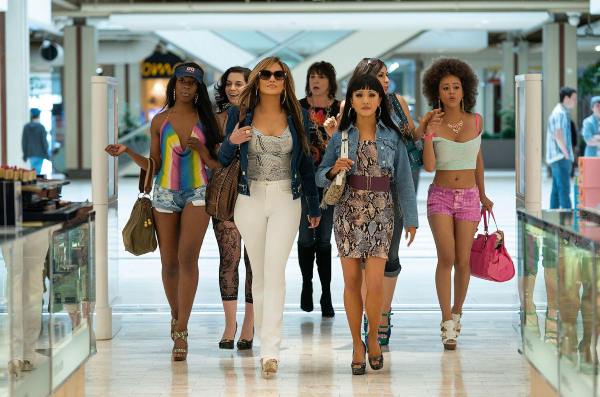 Hustlers: From Scores to the Big Screen

Drugs. Money. Red bottom heels and chinchilla fur coats. None of these seem out of place when you think of strippers in film. It is the depth of friendship portrayed in Lorene Scafaria’s new film Hustlers that make this rags-to-riches-to-downfall film unique. With an A-List cast and a shocking plotline based (somewhat arguably) on a true story, Hustlers has everything wanted to pull at the box office, and to pull at the heart strings of viewers.

Hustlers is based off a New York Magazine article written in 2015 by Jessica Pressler called “The Hustlers at Scores,” bringing to light the work of four former strippers who, attempting to escape poverty, take to drugging men and stealing from them by racking up their credit card bills at clubs from which they take a large cut of the profits. Pressler’s article recounts the story through her interviews with the two “ring leaders,” though they would be hard pressed to call themselves that. Most of Pressler’s on the record content came from Roselyn Keo, a New Yorker who began stripping at seventeen to supplement her grandparents’ income while they raised her. In Samantha Barbash, a well-known stripper with a solid clientele base, Keo found a mentor and friend. When the 2008 recession hit, Wall Street was hit hard, as was the club the women worked at. Wall Street stopped making money and the men who had once come into the strip clubs to spend obscene amounts of money without a second thought stopped clubbing. Keo claims that’s when the hustling started happening. In what Pressler calls a “Modern Day Robinhood,” with Barbash at the helm and Keo close to her hip as CFO of their “enterprise,” they began drugging (not so great) men, charging their credit cards to the limit, and cashing in at strip clubs where they negotiated lucrative deals for bringing in big spenders. They had it all: money, purses and, according to Keo, each other. Then they had nothing.

Upon reading “The Hustlers at Scores,” director Lorene Scafaria saw more than a rags-to-riches story with an unfortunate ending. She saw a beautiful friendship lost and women supporting women, even when self-survival gets in the way. In her adaption of “The Hustlers at Scores,” Scafaria pulled on Keo’s assertions of friendship: as Julie Miller, a senior features writer at Vanity Fair, recalls at the Toronto Film Festival Scafaria claimed the women’s platonic love and close friendship in the film “was born out of between-the-lines context she saw in Pressler’s piece” (Miller 2019). Barbash herself contends in interviews that there was no girl group and no deep friendship – the four women were business partners and nothing more. Keo, however, remembers the opposite, saying in interviews with Pressler that she and Barbash “‘were like Kobe and Shaq'” (Pressler 2015). Pressler herself admits that Keo is an admitted liar so knowing how much of this whirlwind story is true, despite all the women taking plea deals, is difficult. Barbash still claims innocence on many of her charges.

In Hustlers, Keo becomes young stripper Destiny, played by Crazy Rich Asians’ Constance Wu. Wu’s still fresh face in Hollywood brings a new look to this film, perfectly executing Keo’s confidence in herself and her choices through the rise and fall of the glitter and liquor empire. Her stellar performance of the student becoming the master is complemented by the master herself when Barbash becomes the seductive and experienced “Ramona,” portrayed by the one and only Jennifer Lopez.

Lopez’s Ramona is sexy, enigmatic, and confident, shrouded in fur jackets and Christian Louboutin’s. Introduced to viewers when she strips on stage, Lopez provides a captivating performance from the start. A Bronx native and accomplished dancer, Lopez seems are perfect fit to play Barbash’s counterpart; however, Barbash felt rapper Cardi B (who does cameo in the film) would have been more accurate due to her time as a stripper before making it in music. Barbash’s concerns aside, Lopez’s performance of this powerhouse character is undoubtably marvelous, eliciting awards buzz that Vanity Fair’s Jessica Miller believes will have staying power until February. Lopez has contributed to upwards of 35 movies throughout her career, yet this is the first time in over twenty years she has had Oscar whisperings around her, the last being in 1997 for portraying the widely famous and ultimately murdered musician in Selena. With depth, power, and sexuality flowing around her, Lopez’s Ramona centers a film that manages to tackle tough topics including, as USA Today Entertainment Editor Andrea Mandell points out, “capitalism, the gender divide, and class warfare” (Mandell 2019).

Destiny and Ramona’s story comes together in the film through Jennifer, played by Julia Stiles. The film adaption of Pressler, Jennifer interviews the women and retells the story in 2014, looking seven years back to the rise and height of the “empire” in 2007. Furthermore, everything we hear is on the record content, sound cutting out to us, the audience, when anything off the record is said, adding more to the mystery of the film, and more honest to the relationship Pressler developed with Keo and Barbash. Stiles’ Jennifer is the intermediary through which Scafaria saw a beautiful friendship, and the toll it took. Without the role of Jessica, Pressler’s insights would be lost. She pieced together comments and interviews to complete the whole story of these women in her article, and she admits that some of what she had been told might have been lies. It is the inclusion of Jennifer that makes the story true.

Wu, Lopez, and Stiles are not the only Hollywood stars in this film. Lili Reinhart (of Riverdale) and Keke Palmer (of Pimp) make up the second half of the infamous foursome. They bring a credible yet still fresh air to the film, as well as their respective fanbases to the box office. The powerful quartet of ladies aren’t the only familiar faces – musicians Cardi B, Lizzo, Usher, and G-Eazy all join the Hustlers cast to bring in viewers, although each’s role seems almost forced. Lizzo, Usher, and G-Eazy could all easily be replaced with other actors, some perhaps better trained to help make those roles flow into a larger sense of completeness. These artists were heavily used in the marketing of this film, showing up in the actors lists and clips used in trailers, however they all maintained small speaking roles in the film. It’s almost as if characters were created just so these specific musicians could fill them, hoping to bring a larger crowd to the theatres to see them. The same could be said for Cardi B; however, as a former stripper very outspoken about what the stripping world is like (she has admitted to stealing from men while dancing and often discusses how she became a stripper), Cardi brings almost a sense of forethought to the film. Scafaria and these actresses aren’t just portraying what they think strippers are, they are hearing from current and former strippers about the life, and how to do it right. After all, Hustlers isn’t a film about stripping, it’s a film about people’s lives. Those lives must be understood to be portrayed correctly. That being said, as freelance writer Breena Kerr of CNN points out in her 2019 article, many strippers are concerned this movie creates a disconnect between strippers being celebrated in film but put down in real life. At the end of the day the film might be treated differently than strippers going to work every night, yet there is something to be appreciated about Scafaria’s attempts to make the film honest to the industry it portrays.

Hustlers adds another successful film to director Scafaria’s blossoming collection, which includes blockbuster hits such as 2015’s The Meddler and 2013’s Coherence. It’s safe to say this film has garnered much more attention than Scafaria’s past films. Perhaps it’s the A-List cast of actors and musicians. Perhaps Hustlers is riding on the coattails of other true tales where women rise to the top by toppling men, only to fall from grace and rise from the ashes again by telling their story, such as 2017’s Molly’s Game. But maybe it is the nearly perfect combination of girl power, sensuality, and risk oozing from this film that has pulled in upwards of $33 million in its opening weekend. Where the film falls flat is in the little details – musician actors whose performances fall short on the big screen and a plotline lacking the true climax Hollywood has made viewers so accustomed to seeing. That is the problem with “true story” films – you know the ending before you even enter the theater. Whether the true story film takes a Once Upon a Time in Hollywood turn, or sticks true to the story as in Molly’s Game, the audience goes in pretty confident in what they will see. Regardless of this genre fault, fans have flocked to this gritty and glittery story, which manages to be both uplifting and honest. With a story this outlandish and a cast this good, Hustlers is a “see it to believe it” film, and you won’t be disappointed in the telling of this story. Throw on your best fur coat, some red bottom heels, and head on down to the box office to see this film for yourself. Just maybe hide your credit cards at home first.