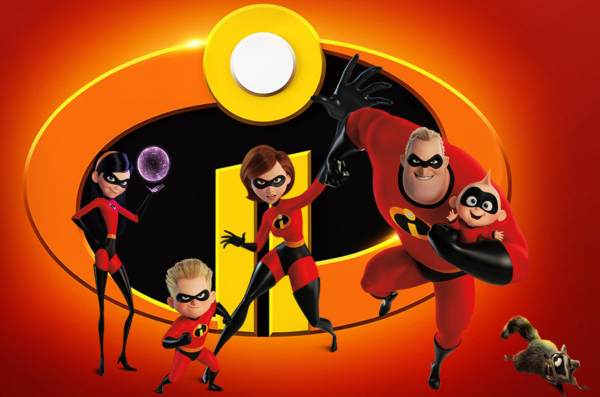 Nearly fifteen years have audiences been patiently waiting for the sequel to Pixar’s successful much-loved family superhero flick. All your favourite characters return to take on new villains and new missions that allow each Incredible to use their powers in a fun and exciting way. The question is whether or not that this film was worth the long wait.

The Beginning/A Change in Shift – The best part of the film occurs at the start where we begin where the first Incredibles ended – The Underminer. Straightaway action ensues in a chaotic, intense way so that we are drawn into the Incredibles from the get-go reminding us of their powers and personalities. After this chaos is resolved we see the dynamics in the Incredible Family shift. Mrs. Incredible (A.K.A Elastic Girl) becomes the breadwinner whilst Mr. Incredible has to stay at home and look after the kids whilst trying to be supportive and hide his jealousy from his wife’s success. This in itself is quite poignant and relevant when looking at current issues surrounding gender equality in the workplace. The switch makes for humorous moments, but it is a clear statement surrounding the difficulties and ideals of how society still sees women as the home carer and men as the provider. It supports the cliché that whatever men can do women can do it too, sometimes, even better.

Old and New Characters – Seeing childhood favourites on the big screen again will put a smile on anyone’s faces and make adults feel like a kid again. Dash (unnoticeably voiced by a different actor) is my personal favourite, and remains the cheeky, high-energetic 10 year old. As hinted before, you get to see more of Elastic Girl and more of what she can do (the motorcycle/metro chase scene was intense) as she hesitantly fights against injustice in the new fictional city of New Urbem. The short appearance of Edna was a clear audience favourite, but it is Jack-Jack who steals the show. Though an old character, his development of new, random powers make him feel like a new one, and with Mr. Incredible taking on the role of an unexperienced stay-at-home parent, this is an inevitable recipe for hilarity (trying to make Jack-Jack reappear with a cookie was priceless).

With an array of new super-powered characters, the only one worth mentioning is Voyd. With similarities to the mutant Blink in X-Men: Days of Future Past, Voyd’s teleportation abilities bring a high sense of fun and intensity. In particularly, towards the end Voyd tries to teleport Elastic Girl onto an aircraft, but Elastic Girl keeps missing the target, so Voyd attempts at least three more times to get Elastic Girl on the fast traveling turbo jet. This was ingenious, showing us a unique perspective and scenario not seen before in previous superhero movies.

The Visuals – Needless-to-say, Pixar is so reliable and consistent with the high-level quality of the visuals and Incredibles II does not disappoint. Colours, light and shade, set designs, together emanated ecstasy for the eyes, and combined with the distinguishable energetic soundtrack, brought a solid, satisfactory completion to the film.

Different Different But Same – What is really odd about watching Incredibles II is that after waiting over a decade for this sequel to be made, nothing much has really changed, i.e. the film occurs only days after The Underminer event. The storyline has not really progressed either; Supers are still exiled and forbidden to use their powers in the public domain, Violet’s boyfriend’s memory has been wiped and doesn’t remember ever meeting Violet and so she has to try and win his heart for a second time round, and Dash is still having problems with school (albeit math problems as opposed to behavioural ones). Also, with Violet, she is dramatically different in personality (clichéd teenage mood swings) and in her powers (she can now use her shields in a offensive way). It is great that Violet and her powers have progressed and evolved, but with the time being set only days after the end of Incredibles I, this seems a bit odd and misplaced.

What’s more flawed about the film is that, although it seems fresh and different to the original, there really isn’t much difference to the structure at all. Mrs. Incredible has to work alone for some rich people she rarely knows – just like Mr. Incredible in the first – one of the people who Elastic Girl works for turns out to be the villain and is tech-savvy and uses technology as a means to get what they want – just like Syndrome in the first – the identity of the villain is revealed three quarters of the way in, Violet and Dash is left alone to defend for themselves for about seven minutes, and, just like the first, there is a similar climatic end which involves the efforts of all the Incredibles working together.

So although it appears that the sequel is far different from the first instalment, closer inspection shows that it has more similarities with its predecessor, and the problem with this is that it makes Incredibles II seem stagnant, trite, and unoriginal. Like the latest Star Wars franchise, nostalgia alone cannot make a film a good one; it is the combination of the storyline, script, messages, and themes and ideas that elevate an average film to an incredible one.

Screenslaver, The Antagonist – The villain in Incredibles II – Screenslaver, is one of the most flimsy antagonist seen this year. It is extremely obvious who the villain turns out to be, and rather than hiding Screenslaver’s identity, the film should have spent more time building Screenslaver’s backstory and create more empathy behind Screenslaver’s actions. Instead, we get a very bland, forgettable, unconvincing, two-dimensional adversary. With strong villains in superhero films this year – Eric Killmonger in Black Panther, Thanos in Avengers: Infinity War – Screenslaver is by far the weakest aspect of the sequel.

So was Incredibles II worth the 14 year wait? I hate to say this, but no, it really wasn’t. Definitely go see it and make a family outing out of it, but in no way does Incredibles II outshine the first, nor does it come anywhere close to how outstanding the first one was. The reason for such a long wait was that the creator, director and writer, Brad Bird, wanted to make a sequel until he had a good, compelling story and script. This can only be commended, but unfortunately, even after good intentions, Incredibles II feels like it was trying to capture the magic created by the first encounter, and so ends up being nostalgic but in a repetitive, uninspiring, uncreative way. Kids will enjoy this film, adults will feel like a kid again, but you just won’t leave the cinema feeling like the way you did the first time round.