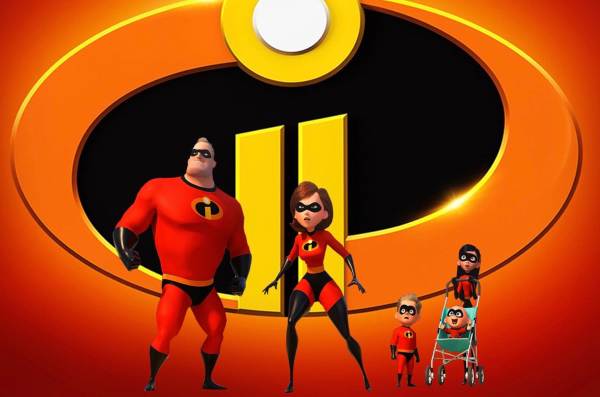 After the mild disappointment of Finding Dory, which took thirteen years to come to fruition, only to see it merely reheat the framework and mechanics of the original, I was a little wary of the sequel to The Incredibles, which has taken even longer to gestate (fourteen years). Thankfully, returning writer/director Brad Bird doesn’t rest on his previous success for this much-anticipated follow-up, and the resultant effort is both exhilarating and hugely entertaining.

Despite the decade-and-and-a-half gap, Part Two picks up right where the first film left off, with the Parr family, made up of Bob (Craig T. Nelson), Helen (Holly Hunter), Violet (Sarah Vowell), Dash (Huck Milner) and Jack-Jack, taking on the Underminer (voiced by Pixar regular John Ratzenberger), an endeavour that unfortunately sees considerable damage done to their surrounding environment. Helping them battle the diminutive foe is fellow hero and longtime friend Frozone (Samuel L. Jackson). Agent Rick Dicker (Jonathan Banks) can only do so much to protect the superhero family, due to the law which continues to make their exploits illegal.

Despondent about what has happened, Bob and Helen receive a mysterious invitation, one that leads them to the business tower of DevTech, run by the brother-and-sister team of Winston (Bob Odenkirk) and Evelyn (Catherine Keener), the former running the company while the latter designs and builds the dazzling gadgets. The duo want the anti-Super law overturned, and decide that the best way for that to happen is to show the great deeds superheroes can perform. Much to Mr. Incredible’s confusion, Winston chooses Elastigirl to be the one to pave the way, a challenge she is happy to tackle head-on.

While Helen courageously takes on a villain named Screenslaver (whose identity admittedly is never in doubt), who can control the minds of anyone who looks at a monitor of any kind, Bob stays at home (at one of Winston’s elaborate residences) to look after the kids, and it is a task he soon finds, a la Mr. Mom, is not as easy as it seems. Looking on in awe and respect are a younger generation of superheroes, including the fawning Voyd (Sophia Bush), who sees the legendary Elastigirl as her idol.

What is terrific about Incredibles 2 is the way in which Bird again takes his time developing and moulding his characters, all of whom he has an obvious affection for. With a mega-budget superhero film released what seems like every twelve hours now, it would have been easy to go the slam-bang route, overwhelming audiences with a never-ending stream of large-scale set-pieces, peppered with characters who have already been introduced. There are undoubtedly some visceral, eye-popping action sequences, but they achieve that kind of impact because Bird knows exactly when to deliver them. Those who found the first film slow-going, will similarly find irritation here as well.

The evolving dynamic between family members is handled with sensitivity, observant detail, and humour, and Bird manages to avoid a number of clichés by concentrating on the people themselves rather than the various concepts that make up a scene. As he showed with films such as Ratatouille and the iconic The Iron Giant, an animated film can be that much richer if the movie-goer connects with its gallery of players the same way they do with those in a live-action film. Frozone is once more an integral part of this familial environment, as is Edna Mode (voiced by Bird), who almost steals the film like she did in the original.

Bird also entwines the fun with particular themes that touch upon matters affecting the world today, including technological advances, data protection, gender equality, and immigration, but carefully ensures that the underlying messages don’t unbalance what is essentially supposed to be a delightful, comic-book adventure.

The voice cast is first-rate, and of course, being both a Brad Bird and Pixar production, the animation is absolutely superb, perfectly homaging the vibrant sheen of spy films and TV shows from the 1960’s, and in fact it’s colourful design is, at times, reminiscent of the hilarious OSS117 films starring Jean Dujardin.

Bird stated that he didn’t want to return to this particular universe unless he had come up with a strong, relevant story. The fact that Incredibles 2 works on a number of levels shows that he was certainly true to his word, offering not warmed-up leftovers, but rather a genuine expansion that is full of energy, intelligence and heart.