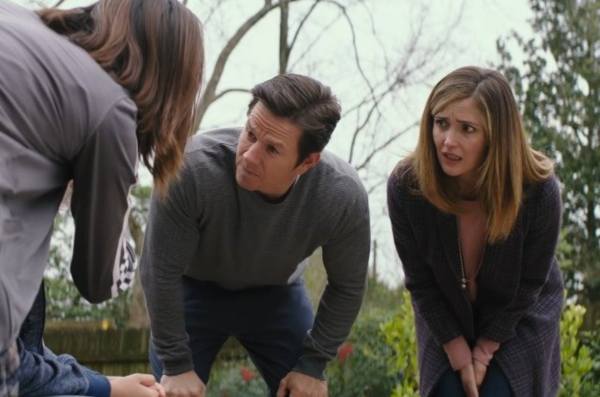 Instant Family is a heartfelt comedy that does enough to be an entertaining movie. The movie starts off with Pete (Mark Wahlberg) and Ellie (Rose Byrne) buying their new house which they plan on renovating. With them are Ellie’s sister Kim (Allyn Rachel) and her husband Russ (Tom Segura). Russ and Kim are planning on having on having a baby and as they present this idea to her Ellie longs to be a mother a mother. Not long after she checks website for foster children and soon she persuades Pete to foster a child. As they visit the agency and are introduced into the rules of foster care they find themselves drawn to the teenager Lizzy (Isabella Moner) and ask to foster her. That is when they are told that she comes with two younger siblings Juan and Lita. I am going to leave to leave you at this point since revealing anything more would spoil the fun. Comedies like this one come along many times every year and some are better than others. This is one is quite enjoyable. The jokes are funny, there is some witty dialogue and we have solid leads.

Mark Wahlberg and Rose Byrne have proven their comedic talent many times before never in the same movie however. I must admit I was a little skeptical that actors as different in style as these two could pull it off but fortunately they have enough chemistry and skill to do it well. It never felt uncomfortable watching them. But the movie wouldn’t be complete without the three child actors all of which do a great job as well. The three function well as siblings and especially Moner delivers a heartfelt comedic performance. Her character is a confused a teenage girl and while Lizzy is not pushed into the spotlights he still gets a few scenes to show her emotion and skill. There is two more persons I have to mention. One is Margo Martindale. She plays Pete’s mother Grandma Sandy. Martindale appears about halfway through the movie and while the movie is a comedy and I had quite a few good laughs nothing made me laugh as hard as Grandma Sandy.

Every scene Martindale is in she steals. She comes in when the movie begins to fade and is at the verge of becoming redundant and Sandy just surprises us with three minutes of hilarious banter about Grandma stuff. From there Grandma Sandy is a delight to watch and just when you think she made her last joke she brings out an even better one. The second actress I want to mention is Octavia Spencer. I have never seen a movie where she wasn’t a delight to watch. Whether she is the voice for the mute Elisa in The Shape of Water or the school guidance counselor in A Kid Like Jake. She always lightens up the scene with just her smile and her unique delivery of lines.

She is the one actress that can get a smile out of the audience with even simplest line just by bringing her typical Spencerish spin to it. Here Spencer plays one of the women running the foster care facility. She doesn’t have too many scenes but every single one is heartfelt and genuine. When she talks about foster care and the hardships some of the kids went through you she means it and that it is real. Instant Family lives mostly of its talented leads and their ability to deliver their lines the right way. However there some other pints that make this movie enjoyable. While there is a little too much forced slapstick for my taste sometimes it still has enough genuine funny moments generated through the story.

All in all we can say that Instant Family is a very enjoyable and light comedy. If you want to spent a nice evening in the cinema and have some fun and be entertained afterwards and don’t have to think about the movie or the story afterwards this is the one for you. It is definitely worth to go see it but after that I think it’s enough to wait it comes on TV and watch it again. I will probably get the DVD just so when I am in the mood for a good comedy I have one more option in my shelf to fall back on.