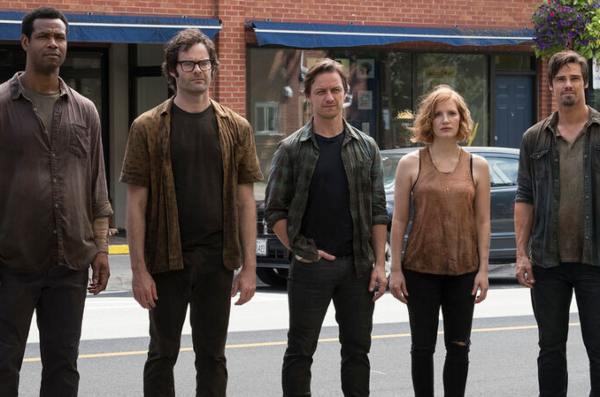 I wish there was one word to describe Muschietti’s adaptation of Stephen King’s classic horror novel IT, but that is completely impossible. This sequel to the first remake of IT is everything the first one was and more. As I left the theater, I labeled this movie as very entertaining, funny, terrifying, and surprisingly moving. Sometimes during the film, it was even difficult to watch due to the graphic visuals that today’s modern age technology can produce for film makers.

I for one am not the biggest horror movie fan, but this movie, I highly recommend. Here we are again, back in Derry Maine with our best friends “The Losers Club”. Once upon a time, the petrifying Pennywise the clown came back after his hibernation for twenty-seven years to feast on some more innocent children. What I truly loved about this movie is the gripping story line that goes along with the suspense that Muschietti delivers through his directing. The cast is impeccable for the transitions between the kids in the original to their adult selves makes perfect sense. Bill Hader is the well-crafted comic relief and creation for the adult Richie as a professional standup comedian; probably my favorite character. Another reason I love this movie is how truly scary it could be. Pennywise is petrifying to look at and you can see why the people who meet their demise get killed due to their fear of the demon clown. Bill Skarsgard (Pennywise) spoke in an interview of how on set, one of the child stars actually got so scared that he began to cry, and they had to re-do the scene. In my opinion, I say that’s a job well done, and the kids deserve their own rewards not just for being great actors in such a classic movie, but also for being able to deal with the haunting Pennywise on set for the shooting of the movies.

Of course, nothing in this world is perfect and there are somethings that I did not very much enjoy while watching IT Chapter Two. If there is any criticism that I found in this modern-day horror film, it’s the lack of connection between TIm Curry’s original Pennywise the Clown to Bill Skarsgard’s new interpretation of the demon, child devouring clown. Now, I for one will never knock Bill’s acting for I think that he did a phenomenal job in both of the new adaptations of IT, but I have to say that I am simply a bigger fan of TIm Curry’s original take. The reason I say this is because TIm Curry’s brought more comedy to the clown’s appearance. One of the most memorable scenes in the original IT was when Richie was in the library and Pennywise was dropping one liners to Richie making fun of him. That scene was hilarious yet disturbing; a magnificent piece of art.

Another criticism of the remake of IT is the change in the story line and the differences from the original horror story. I understand that as time progresses, we as human beings demand change, but sometimes, original pieces do not need any adaptations. One scene in particular that was interesting, but also something that I wasn’t too fond of was the scene where Beverly visits her childhood home. We as movie goers learn here that “bigger and scarier” sometimes isn’t actually scarier. The scene from the original IT was just as creepy but more entertaining for the modern-day version, the illusion of the dead old lady in Beverly’s home becomes a naked monster around 10 feet tall that chases her out of the house. I found this scene to be more comical than scary for I laughed when I saw a gigantic naked woman chasing one of the main protagonists out of her old home, when in the original, Pennywise exposed himself as a regular sized, dead lady who chased her out of the house. To me, this scene seemed more believable, when the modern version was rather blown out of proportion and it really didn’t sit well with me.

Overall, I enjoyed IT Chapter Two and will most definitely watch it again. I highly recommend going to see it in theaters so you can get the full terrifying experience. After seeing IT Chapter Two, “you will float too.”