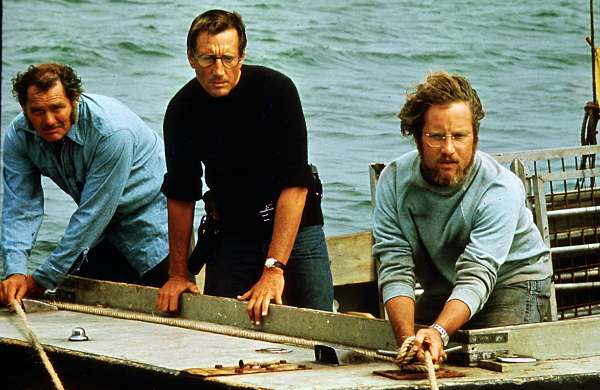 Based on Peter Benchley’s bestselling thriller of the same name. Director Steven Spielberg delivers one of the bestselling thrillers of the late 1970’s! Believe it or not, Steven Spielberg wasn’t first choice to direct the movie. Spielberg hadn’t long finished Duel when Jaws came into play. I think it’s safe to say he was a great choice to direct the movie as Jaws went onto being one of the bestselling thrillers of the past forty years. Adapting a book into a movie is always going to be challenging. Naturally a lot of changes need to be made for screen. Although Spielberg chose to tame the storyline down so it could have a “12” rating, it still works very well and is just as thrilling as the novel.

Christie is out partying with friends one night when she takes a boy down to the beach for a late night swim. Although not out of her depth she soon finds herself being watched by a monster, a great white shark! A shark that soon takes her life! Brody is informed immediately of the attack and finds himself well over his depth in trying to hunt down a killer shark! Starring Roy Sheider as Chief Brody, Brody is the Chief of Police on Amity Island, where he resides with his wife Ellen and their two sons Michael and Sean. Originally from New York, Brody hasn’t long been living on the Island when the attacks start to plague the people of Amity. Just in time for the fourth of July! Sheiders performance is excellent, a family man who is more used to the big city then that of an Islander. Brody finds himself having to convince local Mayer Larry Vaughn that there is a killer shark on the loose. It takes Marine Biologist Matt Cooper (Dreyfuss) to actually convince them of quite how serious the situation is.

Richard Dreyfuss’s performance is fantastic, Dreyfuss brings fantastic characterisation to his role. Enthusiastic about his work, he knows his stuff! Equipped with everything imaginable, spears, shark cages and sonars. The chemistry on screen that he soon develops with fisherman Quint is marvelous. The two don’t get along and it shows fantastically on screen! The tension between the two is very genuine and realistic. Rumour has it the two actors didn’t get on particularly well off screen. Fishermen Quint is a very dominant character, played by Robert Shaw. Quint a popular fishermen on Amity Island manages to convince Chief Brody that he is the right person to catch the shark, for a mere $10,000, preferring to work alone, believing Marine Biologist Matt Cooper is a pompous know it all. The three characters soon find a way to work with another and overcome their problems. Showing off scars and tattoos in the process. The tension is so strong you can practically feel it oozing from the screen!

Beautifully shot in Martha’s Vineyard, Massachusetts’s. Cinematographer Bill Butler has captured the scenery perfectly. A stunning looking film that has been brilliantly shot. The camera work is excellent. Stunning close ups of the shark, Dolly Zoom’s that really emphasize the fear in a scene. What’s most impressive is that you don’t see the shark until almost 45 minutes into the movie. Spielberg relies on reactions from his actors to create fear and suspense, it’s not what you see, but what you don’t see the thrusts fear upon audiences. I love the rustic feel to Quint’s boat the Orca, his harbour house full of shark teeth and fishing nets, I love the realism behind it. The boat and the harbour house suit Quint’s personality perfectly. Gorgeous special effects, a shark so convincing you’d honestly believe it was real and in some cases was, due to accidental live footage. That of course just adds to the magic of the movie!

Of course no film would be complete without an incredible score. Composer John Williams wrote quite possibly one of the famous theme tunes of all time! A theme that almost anyone can guess! A score so beautiful it practically tells the story itself, the music becomes faster and stronger as the shark approaches, fear, suspense. Quieter and more soothing when the shark is lurking beneath the ocean waves. Inspiring, beautiful moments shared between Chief Brody and his son Sean. The score takes you on a journey! Absolutely thrilling! A masterpiece, one not to be missed!