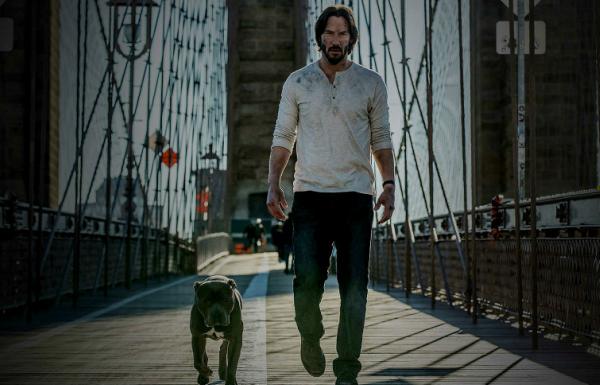 Yeah… I’m thinking he’s back too.

Keanu Reeves and director Chad Stahelski are back with their follow up to the universally acclaimed and box office surprise, John Wick. A quick fun fact about Chad Stahelski – he broke into the industry as a stunt performer at the age of 24 and years later someone would tell him that he resembled Keanu Reeves. Stahelski was then introduced to Reeves on the set of The Matrix and shortly thereafter became his stunt double. Now he is in the director’s chair once again directing Reeves for John Wick: Chapter 2.

Whenever a sequel gets made to a wildly successful first film, especially within the action genre, there will always be comparisons made to if it lives up to the first installment. What made John Wick such a pleasant surprise in 2014 was that it was so simplistic. It enthralled audiences with an emotional attachment to the main character’s brief past and the unfortunate death of an innocent puppy. You don’t know much about John Wick but you don’t really need to. The film creates a wonderful mystique and aura about him where every other character knows him and some even refer to him as the “Boogeyman.”

John Wick 2 continues the story of the first film by taking place barely after the first one’s ending has concluded – like, in the exact same week. Wick is still out for vengeance after all of his fighting and killing because he still does not have his precious Mustang back. The opening sequence is roughly 20 minutes long and boy does it set the tone and make an effortless transition from the first chapter to the next. Chalk full of hand to hand combat and car chases, it was a definite priority for Stahelski to let the audience know that this movie is going have all of the elements of the first installment and jack it up a few notches.

Once he is able to retrieve his Mustang John is looking forward to finally retiring, which is all that he wanted to do in the first place. But for John Wick it’s never that easy to walk away from a life and world that never seems to sleep. His former ward Santonio D’Antonio (Riccardo Scamarcio) pays a visit to his home and calls upon his ‘blood marker’ that he still needs to fulfill on his behalf. John informs D’Antonio that he is officially done with that part of his life and wants to move on from it. D’Antonio does not accept his announcement of retirement and after another unfortunate development of events, John finds himself tangled once again in the world that he thought he left behind forever.

Give credit to Derek Kolstad who is the writer and creator of the entire John Wick universe for attempting to expand it in Chapter 2. Attempt is the key word here. He has created a unique world and he wants to provide more depth and insight to just what it really is but unfortunately it does not necessarily hit the mark. More characters are introduced that are able to give us a brief introspective look in to this secret society of hitmen that John is looking to leave behind. The story is more than just revenge at this point as well. John is looking to finally be peace and accomplish this one last task, but deep down he does feel this is right but this is only way of fulfilling his oath and moving forward with his life. All of this could really make for a compelling narrative but all of it takes a backseat to the primary source of entertainment – the action scenes. This is obviously a full blown action movie first, but seeing that there was an effort made to make progress on the insane underground hitman society makes me feel like it could have been much better in that aspect of the story and writing.

There certainly is no shortage or weaknesses in the action sequences or the choreography and how each scene is executed. Stahelski is clearly able to take his experience as a polished, former stunt performer and create scenes that don’t get repetitive. Wick is able to find new and inventive ways to beat people to a pulp with not just his hands or kill people with only the finest of cutlery and guns. What also makes these bloody, action sequences even more enjoyable to watch is that they seemed to be much more fun. It never became satire for one moment but the structure and execution of a handful of different scenes made for a much more enjoyable and fun experience.

John Wick 2 extracts all of the action elements of the first and flips them on their head with the aid of fantastic production design and higher stakes action. You come for the action and stay for the action. Even though the expanding universe of John Wick isn’t all that gripping but does feel necessary. Things should only get bigger and bolder from here on out as well as deadlier for John Wick.